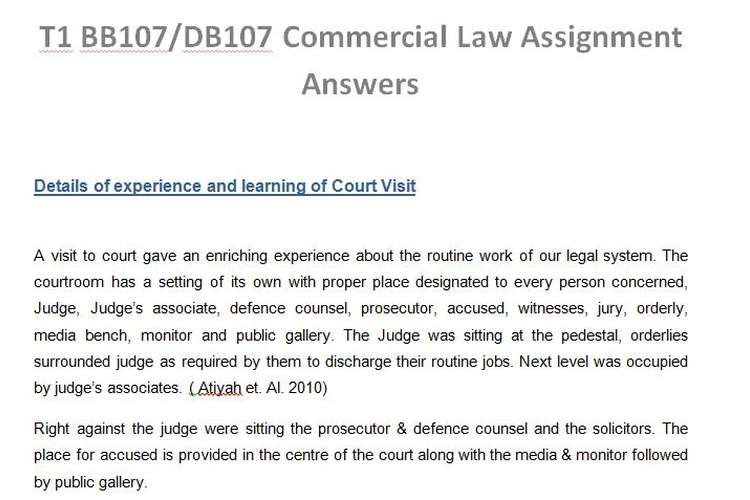 Details of experience and learning of Court Visit

A visit to court gave an enriching experience about the routine work of our legal system. The courtroom has a setting of its own with proper place designated to every person concerned, Judge, Judge’s associate, defence counsel, prosecutor, accused, witnesses, jury, orderly, media bench, monitor and public gallery. The Judge was sitting at the pedestal, orderlies surrounded judge as required by them to discharge their routine jobs. Next level was occupied by judge’s associates. ( Atiyah et. Al. 2010)

Right against the judge were sitting the prosecutor & defence counsel and the solicitors. The place for accused is provided in the centre of the court along with the media & monitor followed by public gallery.

It can be elaborated as below:

A civil court handles cases such as petty claim cases, civil cases, family law cases, juvenile cases or other civil cases relating to name change, harassment etc. The case begins with appearance of plaintiff against the accused. A ‘writ of summons’ is filed by plaintiff which ‘memorandum of acceptance’ is filed by defendant with an intent to defend his actions. After this the statement of claims are filed by plaintiff against this counterclaims are filed by accused. Later, both the parties provide a list of documents to the court. At this stage, the case moves to trial, the settlement date is fixed before the actual trial begins, if the settlement is not reached then the case goes to actual trial where the court makes the decision to declare the claim being upheld or rejected.

I attended a case Victor v Robin, it was about issues pertaining to defects in goods sold, manufacturer’s warranty, right to reject by the purchaser and sale of Goods Act, 1954. The facts of the cases are:
Plaintiff purchased a car from the defendant with a warranty of 1 year against manufacture’s defect; he was entitled for free of cost repair or replacement of faulty part.

The purchaser rejected the replaced car after driving for 3180 miles on account of ‘lack of merchantable quality’. (McKendrick et. Al., 2000)

The transfer of goods and services shall be subject to agreed conditions, and shall be conducted before time lapses.

The parties shall be legal and in capacity to contract.

It should be implied term and goods sold are to be correspondent of the description.

Goods shall be fit for the purpose as per contract.

Buyer’s acceptance is considered if he communicates to seller of his acceptance or act in way till the lapse of the time.
The Judge ruled the defects were acceptable as they could be repaired. Plaintiff should have rejected the car at the time of acceptance, which was not done; also the rejection should have been expressed before driving 3180 miles. The judge ruled that plaintiff could not compensated as car was of merchantable quality and fit for all purpose. (Guest et. Al., 2003)

I support the ruling as the defects found were repairable even if the product did not meet the sale by description as required under S.18. The car being driven for 3180 miles stands accepted under S.39. The buyer had the sufficient time to inspect and intimate as under S. 38.