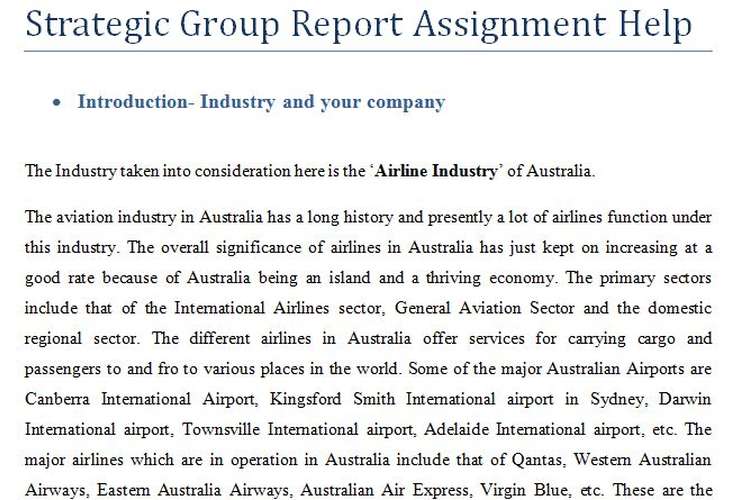 Introduction- Industry and your company

The Industry taken into consideration here is the ‘Airline Industry’ of Australia.
The aviation industry in Australia has a long history and presently a lot of airlines function under this industry. The overall significance of airlines in Australia has just kept on increasing at a good rate because of Australia being an island and a thriving economy. The primary sectors include that of the International Airlines sector, General Aviation Sector and the domestic regional sector. The different airlines in Australia offer services for carrying cargo and passengers to and fro to various places in the world. Some of the major Australian Airports are Canberra International Airport, Kingsford Smith International airport in Sydney, Darwin International airport, Townsville International airport, Adelaide International airport, etc. The major airlines which are in operation in Australia include that of Qantas, Western Australian Airways, Eastern Australia Airways, Australian Air Express, Virgin Blue, etc. These are the primary airlines that carry out the day to day travelling operations under the aviation sector. Australia is a prospective tourist destination and the aviation industry is a major contributor in the facilitation of the operations related to Tourism. (Australiaonnet, 2016)
The Company taken in consideration here is ‘Virgin Australia’. Virgin Australia, formerly known as Virgin Blue, is the second largest airline in Australia after Qantas Airlines. It is based in Brisbane, Australia and was founded by the renowned British businessman, Mr Richard Branson. The first flight under this brand name was a DJ 214 flight, operated between Brisbane and Sydney in the year 2000. In 2001, they expanded into a national domestic network as 14 new routes were launched. Further, 9 more routes were launched in 2000. From here, this airline has just expanded in leaps and bounds and is a force to reckon with in the aviation industry of Australia today. Recently in 2015, they announced their international long haul cabin base and the international pilot base. They also reached a landmark agreement along with Tourism Australia and provided a $50 million boost for Australian Tourism. 2015 also saw them complete their full acquisition over Tiger Air Australia. The airline has grown to serve over 30 cities in Australia from hubs in Brisbane, Melbourne and Sydney.   (Virginaustralia, 2016)

The Micro and Macro Environment in which this company is operating- Briefly discuss main factors.

Macro Environment factors in which Virgin Australia is operating under can be determined by conducting an effective PEST analysis.

Company’s competitive advantage over its rivals.

Virgin Australia entered the market in 2000 when the market was dominated by the long established Qantas and Ansett. Little chance was given to this airline to make an impact owing to the existence of these two giants already. Virgin had to do something unique in order to create any impact. It turned out that they were more than just a competition. Virgin Australia focused in competing with its rivals by establishing itself as a low cost carrier mainly focusing on the leisure/holiday market. It had reduced costs by eliminating in flight meals and printed tickets and by providing online booking systems and selling food on board during the flight. The operating cost structure was not as high as that of Qantas and Ansett and this is how they started becoming a force to reckon with. (Robbins, Bergman, Stagg & Coulter, 2014)

Virgin Australia firmly established itself as a major competitor when Ansett crumbled due to financial crisis and before anyone could perceive, Virgin Australia had become an alternative. Ansett reached liquidation owing to its high cost structure but Virgin Australia continued to serve customers at a subsidised pricing and thus increasing its market share ever so more. Qantas became wary of Virgin’s ascendency and felt the urge to jump into the budget carrier market. For this reason, Qantas introduced its child brand of Jetstar with a cheap ticket operating flight business model to provide competition to Virgin Blue. Competition was high between the two but both settled down concentrating on achieving higher market share.

Now that Virgin Australia had already gained competitive advantage over its competitors on the cheap operating airline sector, its consistent growth saw it aspire to now compete with Qantas in the Corporate Business/Traveller market. With the low cost airline Singapore airlines now entering the market, Air Australia made its move. It introduced premium economy class sector and focused on more additional services to attract more corporate prospective customers. Another indicator of Virgin Blue being aspirants to compete Qantas was when Virgin Blue hired former Qantas executive John Borghetti as the new CEO.  In order to enjoy significant competitive advantage, Virgin Blue revamped itself into Virgin Australia and acquired the low cost operators of Tiger Australia and Skywest Airlines.  Now Virgin was ready to compete with Qantas in all three avenues. Virgin Australia versus Qantas in the full service market, Tiger Air and Jetstar in the leisure market and Skywest and Qantas Link in the regional market

Is this company following any Generic Strategies of Porter’s (Cost Leadership, Focus or Differentiation)?

Virgin Australia has resorted to the strategy of both cost leadership and Differentiation. Cost leadership can be attained by either increasing profits by reducing costs or increasing market share by lowering the prices but still attaining a profit because of the reduced costs. Cost differentiation can be attained by providing distinct but quality products and services backed by effective, research, innovation and development. (Mindtools, 2016)
Recent studies show that Virgin Australia has made a comeback into profitability after its stoop down. This is because of resorting to Cost Leadership that had contributed in decreasing costs, driving domestic yield growth, and has helped them improve their corporate and government travel share. Odds have always been stacked up against Virgin Australia but even then, it has attained success in the freight business.  Because of the adoption of thismarketing strategy, Virgin’s results as on 31st Dec-2015 revealed that stability was present in the market with a considerable difference with an EBIT profit of 86.5% valuated at AUD 130 million. (CAPA, 2016)

Cost Differentiation was also exhibited by Virgin Australia and mention should be made about the time of inception of the brand in 2000. They entered the market with two established high cost structure airlines already existent in Qantas and Ansett.     They were distinct as they were the major breakthrough in the low cost carrier market. They were the first to introduce mobile check in and did away with printed tickets. In flight meals were replaced by food sale on board and they had also introduced minimal aircrafts for the purpose of efficient maintenance. Another major differentiator was the repositioning strategy owing to the millions of loss incurred in 2009 and obviously Virgin Australia belonging to the Virgin family meant that it is distinct in the sense that it had strong ties and alliances with international airlines.
Thus we see that Virgin Australia have adopted the Porter’s generic strategies of cost leadership and cost differentiation over the years in order to ensure competitive advantage.(Horn, 2011)

Company’s growth strategies like diversification or integration or company using Ansoff Matrix to grow in their market.

The growth of Virgin Blue can be associated by conducting an Ansoff Matrix Analysis on the airline company. The Ansoff Matrix is a strategic planning tool that provides a definite framework for devising strategies. The four dimensions of an Ansoff Matrix include that of Market Penetration, Product Development, Market analysis Development and diversification.(Kotler & Armstrong, 2015)
Keeping the Ansoff Matrix in mind, the company focused on transforming from Virgin Blue to Virgin Australia. The products and services were altered and the transformation marked the end of Virgin Blue as only a low cost carrier. Alliances with other airlines on a global basis enhanced thee competitive rivalry and this was done in order to extend the product line and the range of services in new distinct destinations. This increased their distribution network and gave them a wider customer base as they now had the chance to operate in more destinations. This also allowed them to be more competitive in diverse areas.

They further acquired Tiger Airlines and Skywest to further enjoy a larger customer base and area of operation. The aesthetics and appearances of the plane were also altered to keep up to effective rebranding. The brand name, exterior of the aircraft including the styles and the paintings, interiors including carpets, leather seats, fabrics, curtains, etc and the priority lounges are all instances of novel adoptions in order to align to the airline’s new market segment. Other developments included crew announcements, choice of music in aircraft, etc.

At the inception of Virgin Blue, the focus was on getting across to the customer base as a budget airline operating on cheap costs. But the transformation to Virgin Australia meant that now they were targeting all segments of customers. They include cheap flyers, premium flyers, medium flyers, etc. This is how they made themselves available to different segments in the market leading to the overall development of their market. Virgin Australia indulged in several above the line advertising activities and diverse promotion in order to communicate their rebranded image to the customers and this helped them penetrate more into the markets to a larger number of audiences. This is how they catered to the four different dimensions of the Ansoff Matrix.

These are the various strategic recommendations that should be implemented at the functional and business level according to me.

This assignment helps us in reviewing the strategic operations that ‘Virgin Australia’ has displayed over the years. We understand the micro and macro environmental factors that play a role in the operation of this airline. The macro factors have been analysed by carrying out a PEST analysis and the micro environmentstudy has been analysed by effectively conducting a brief value chain analysis. We also come to know about the competitors of Virgin Australia namely, Qantas and Ansett. A brief analysis is also given on how it has aimed to achieve competitive advantage over them all these years and succeeded.
Further we see how Virgin Australia has adopted the concept of Michael Porter’s Cost leadership and cost differentiation strategies and a discussion is also included on how the Ansoff Matrix has been implemented to facilitate product and market development over the years. Finally, an eight point strategic recommendation list has been formulated that can be implemented at the functional and the business level.