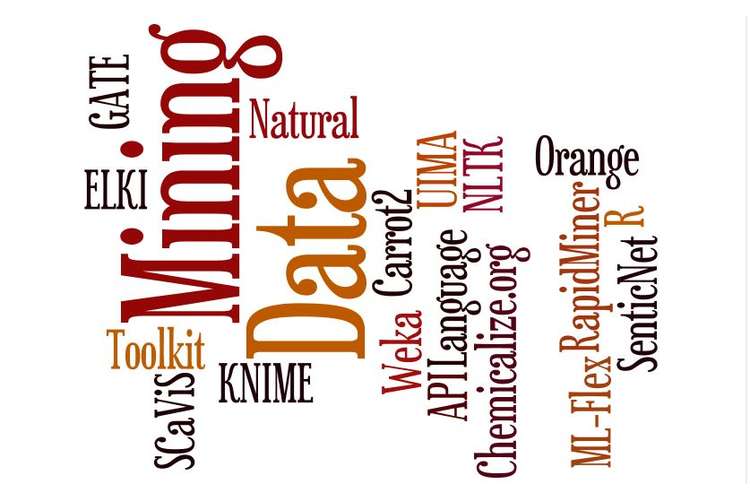 Sinking of the Titanic occurred on the midnight of 14th April in 1912 and with over 2200 people on the board, it struck an Iceberg and resulted death in 1500 people. It took 2 hours and forty minutes to capsize though it was considered Titanic was unsinkable and had too few lifeboats for everyone. This was one of the major disasters which occurred in 20th century and was greeted with global outrage due to operational and regulatory failures. In this rattle data mining assignment help, we would analyze in detail the survival rate of the passengers on board and their chances to survive in those conditions and by building a predictive model which could establish possibility of survival of the passengers (Nisbet, 2006). While we develop predictive model, it will based on variables of significance which would make certain high survival chances and higher survival rate of the passengers on the board. The data will be analysed using special techniques in research management such as decision tree, correlation analysis and principal component analysis. The data used in determining the chances of survival would be based on the passenger’s demographic information such as age, sex, class they boarded, number of family members, passenger fare etc. The main objective of developing the model and analysing is it would determine the survival chances of the passengers and after decision tree analysis predictive modelling is being carried out which would help in survival possibility in that situations considering the environmental conditions on the cold winter night (Liu, 2007). 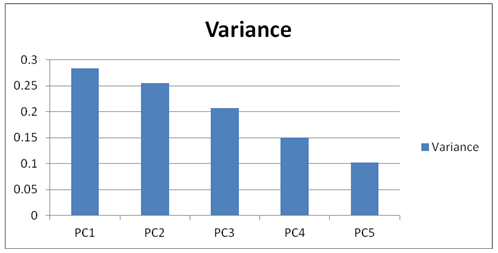 Principal Component techniques is used in determine the variables of significance. These variables are those variables which ensure high survival chances for the passengers on board of the Titanic Ship. These significant variables can be identified through data collected of passengers. In the above figure, the Variance for the five key components is 99.7 % or nearly 100 %. The variance explained by principal combing all the key variables is 99.7 % and the below figure explains the standard deviation along with the variance for each of five components. 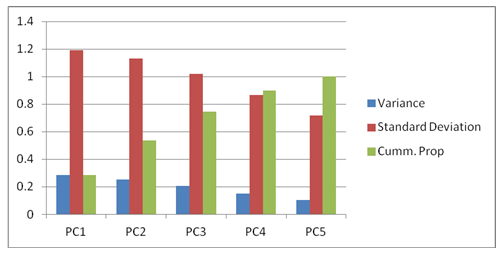 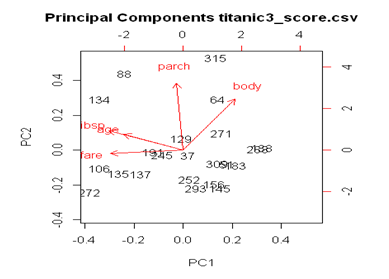 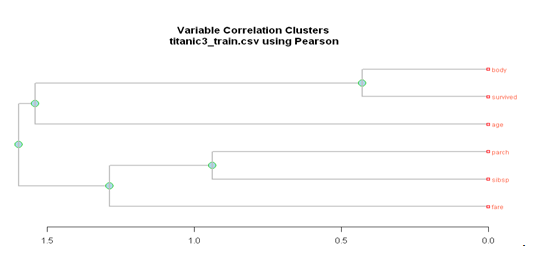 The predictive model is developed to predict survival of people on board of Titanic and it is found there are four significant variables. A decision tree determines there four significant variables which are used in rattle data mining model and which helps in developing the model of predicting the survival of people on the board. 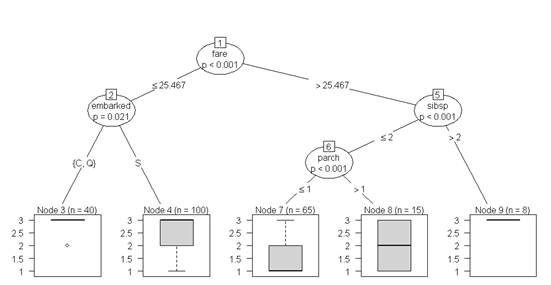 The third variable being the number of parents per children and it defines lesser the number of parents per children, the higher the chances of survival of the passenger. It has indirect relationship with the survival rate. The Parch variable is pegged at one and the variable has also been divided in to two categories one being greater than one and other being less than one. Lastly, the fourth variable in the decision tree analysis is embarkation port and it depends on the port of embarkation which defines the chances of survival and its degree. It depends on the port of embarkation to another which varies with the risk. The three ports which are Cherbourg, Queenstown and Southampton are considered and its affect in the decision tree analysis on the survival rate.

As we see in the figure above, the port of Southampton has higher chances of survival as compared to the other two ports Queenstown and Cherbourg. After the variables have been found, the decision tree helps in building the model for predicting the survival rate. There are different nodes and based on these nodes chances of survival of the passengers on the Titanic board are determined and the nodes 3, 4, 7, 8, 9 are formed and has varying degree of prediction of the survival rate of the passengers on the Titanic Ship. We analyze each of these nodes and determine the probability of survival of the passengers on board as each node is imperative and important with respect to varying degree of probability of survival (Paul et al, 2011).

Node 8: Node 8 is represented by predicting chances of each of variables in the decision tree and the Fare with than 25.467 while also having less than 2 siblings and more than one parent per children. The survival rate of the passengers on Titanic is highest for node 8 as compared to all other nodes. The Node is very significant as it has highest chances of survival and has 15 sample data which meet the criteria for node 8 as we develop a decision tree and build the predicting model for the survival chances of the passengers on the Titanic Board.

Node 4: After Node 8, Node 4 is the second most significant variable which has second highest probability of survival of the people on the Titanic. This node represents the passengers who have paid less than 25.467 and also who have embarked at Southampton. This represents the importance of Southampton port. With the port of embarkation as Southampton people have the highest chances of survival as compared to all other ports.

Node 3: With n = 40, node 3 is formed with 40 passengers on the Titanic and is determined as passengers with less than or equal to 25.467 and the passengers who embarked at port Cherbourg or Queenstown and is also a node though less significant is survival chances that means it has lesser chances of survival as compared to Node 8, 4 and 7.

Node 9: Node 9 is formed with passengers who have Passenger Fare greater than 25.467 and have siblings greater than 2, the number of passengers node 9 has n = 8 and is the less chances of survival as compared to other nodes.

4.0    Significance of Quality of Data

The right type information along with quality of data is necessary in order to make certain the make the robust solution to a problem. It is imperative the data represent real world construct with a consistency in the data and Data Warehouse Architecture is used to so as to ensure the highest quality of data. Building a solution around helps in effective decision making (Phillips et al, 2006). Decision makingcomes directly from quality of data and hence quality of information so it is imperative to understand the data quality. Data Warehouse Architecture helps in determining few significant variables such as accessibility, usefulness, interpretability, believability and validation. Accessibility deals with the designing of the data and the data source and this feature explains quality of data is imperative in order to have the proper data design (Wendel et al, 2002). It is also the most significant feature of Data warehouse architecture and explains the importance of improving the data quality and which helps in better data design. The second feature which deals with usefulness of the data warehouse architecture with updated policies explains the usefulness of the data in making quick and accurate decisions and processes are architecture should be designed in a way accordingly.

The next feature is interpretability that deals with the interpretation of the data which is passed as input to the data warehouse architecture (Guo et al, 2009). The data is analysed and interpreted that forms part of decision making. This feature depends on various models and languages used which help in analysing the data and to ensure data is analysed accurately and effectively it is necessary the input data has highest quality of data. The reliability of the data is another key feature which is termed as believability and it signifies the output data from the Data warehouse architecture can be easily relied upon and can be taken forward for data analysis and finally helping in decision making to the users. Lastly, data validation included in warehouse structure is also necessary for quality of data and for analysing the data (Talia & Trunfio, 2010).

5.1    Creating report with store values in each quarter of 1998 across country and states and comment on the critical trends observed. 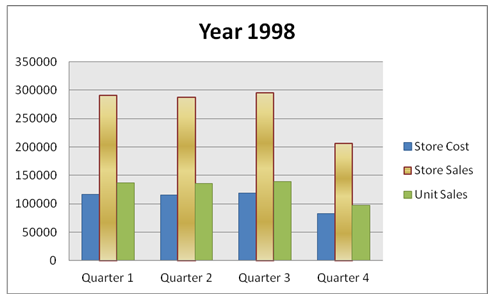 The below graph explains the unit sales of breakfast food in the three states namely Cereal, Mexico and USA. Breafast foods have the highest sales in USA and it is more than combines Mexico and Canada. The below graph also explains the demand in USA for each of the breakfast items namely Pancake Mix, Cereal, Waffles and Pancakes. The total unit sales of breakfast foods is 8502 in USA and it contributes about 51 % of total sales in USA followed by 40 % in Mexico and 9 % in Canada. Among the different breakfast foods, Cereal and Waffles are consumed to the maximum and that too in USA.

Below Pie Graph shows the total Breakfast Foods unit sales in Canada, Mexico and USA and as discussed USA unit sales stands at 51 % which is more than combining the other two states. 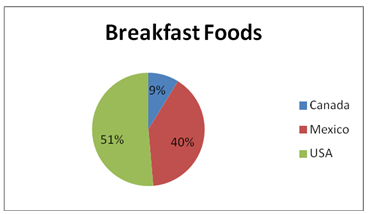 The figure below shows the unit sales and store sales in Oregon and Washington regions of Unites States of America. The unit sales and store sales in Washington Province is more than double than Oregon Province. It can be inferred from the graph below that demand in Washington is more than double as compared to Oregon. As the demand is double so does the consumption pattern as demand is in proportional to consumption. The reason can be because the Washington has higher population as compared to Oregon and as the population is higher there is higher demand and higher consumption and thus higher sales. 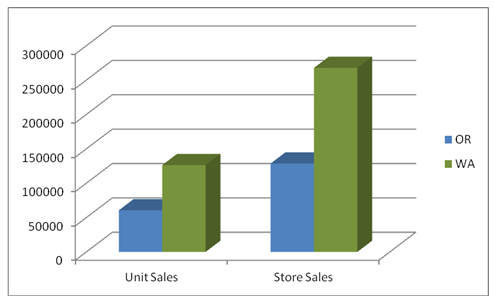 The below table represents the unit sales and store sales in the two states of America namely Oregon and Washington with Washington numbers are far higher than Oregon.

5.4 Creating report with product categories of beer and wine and their product sub categories by order of unit sales and comment on key trend observed.

The graph below shows the total sales of Wine is 74 % and Beer is 26 % and it can be inferred that beer consumption is nearly one- third of wine consumption. Also, the below table explains amongst Beer, ‘Good’ has highest number of sales and Top Measure has the lowest sales. While in the Wine category, Good is the highest selling brand with highest sales and Walrus is the lowest selling brand in the Wine Category. The demand of Wine is far higher as compared to Beer and Good and Pearl brand of wine are highest selling brands of wine. 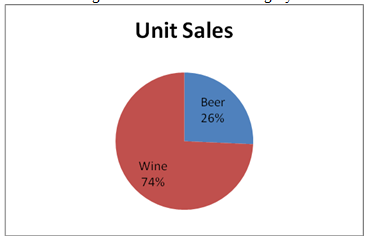 Titanic ship had more than 2200 people on board and over 1500 drowned and only over 700 could be saved when the ship capsized on 14th April 1912. This study is carried out to understand and analyse the survival chances of passengers on Titanic. The data is collected and analysed by determining variables of significance namely Age, number of siblings, number of parents per children, body identification number and the passenger fare which depends on the class through which passenger travelled.

Data is analysed through rattle data mining tool and the techniques used is principal component. The correlation coefficients is determined which helps in identifying the relationship among variables. A predictive model is also developed through decision tree analysis and the significant variables determined are number of siblings, port of embarkation, passenger fare and number of parents on the Titanic ship. This Model helps in determining the chances of survival of passengers based on above variables.