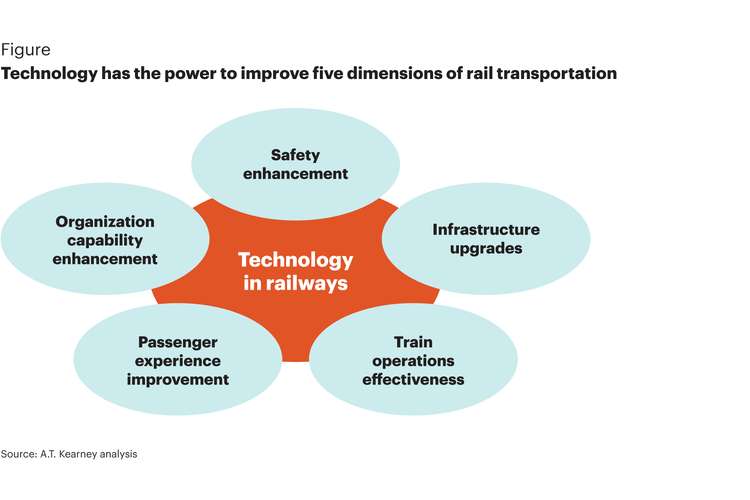 Railways is one of the oldest developed system of transportation. Over the centuries, the railway infrastructure sector has had immense evolution in terms of freight sizes and capacity, technology, track networks, distances, modes of energy and functionalities. In Australia, the railways were first built by private companies of New South Wales and South Australia in the mid-19th century. Since 1920, the federal government of Australia has substantially funded the Commonwealth rail security networks which in 1997 was privatized and set up as the Australian national railway corporation (ANRC). The Australian rail track corporation (ARTC) was then established in 1997 which was responsible for developing and maintaining the railway tracks all over the country.

As there has been a tremendous increase in the development of rail infrastructure for transportation of freight and people, maintaining the infrastructure has become one of fundamental works. For proper functionality, safe transportation and safeguarding the economy it is essential to understand the maintenance and operational procedures. This research is based on the key factors associated with the rail infrastructure; deterioration modelling and condition assessment. As learnt from history, a well consolidated infrastructure system is one of the key contributors for economic growth and development of civilizations.

Rail infrastructure, accounts for more than one half of the freight activities in Australia, which is a 36% increase since the onset of the 21st century. Australian railways carried over 1 billion tonnes of freight in 2012-2013 which is an increase of 57% since 2007-2008, and in 2013 Australian heavy and light rail operators provided 850 million passenger trips, which is equivalent to 2.3 million passenger trips per day (Australian rail association). Maintaining the adequate infrastructure for the ever-increasing passengers and freight rail transportations has been a challenge in creating a complex and competitive rail industry. Billions of dollars have been spent on rail infrastructure for works such as upgradations and maintenance to the existing system of rail. The rail infrastructure in a composite system made up of numerous individual components of variable materials which have often been associated with defects and deterioration mechanisms. However, the condition assessment models for avoiding damages are limited which creates a challenge for performing the maintenance and upgradation works. Difference variables such as axle loads, train speeds, soil conditions, etc. are responsible towards affecting the integrity of the rail infrastructure. However well interpreted or expensive the assessments are to interpret the condition, it is a difficult and time consuming process which also varies due to different conditions and types of materials used in the rail network.

This research project’s primary focus is on developing and publishing a comprehensive railway assessment model that responses to the following:

The aim of this research is to undergo the process of compiling a set of analysis and inferences that are of publishable quality. In order to develop this research, literature of previously developed models, condition assessment reports published by railway experts, deterioration mechanisms for rail infrastructure, tools/techniques available for condition assessment and deterioration modelling are needed to be reviewed thoroughly.

In order to set course for developing and publishing this research, there is need to identify a path according to which this research will be carried forward. Having recognized the study materials and reference reports that are to be evaluated, the following methodology has been formulated.

Literature of articles, reports, thesis and journals on railway infrastructure is reviewed0 while setting the objectives and aims as milestones for this research.

Hierarchy of defects and deterioration mechanisms for rail components are determined.

Condition assessment of rail infrastructure and its individual components are described.

The severity levels of the deterioration mechanisms, defects and condition assessment grading scales are detailed on the basis of data gathered.

Examples of deterioration modelling and condition assessment of rail infrastructure are explained as case studies.

The inferences from case studies is combined with the research in order to detail defect-based model for condition assessment of rail infrastructure.

In this chapter, the literature review of railway asset management is summarized. The main inspection techniques are discussed in the railway condition assessment. Railway infrastructure manuals, specifications, decision making techniques are reviewed and summarized for their development.

Visual Inspection: Today this inspection is the most used technique all over the world which are done by experts tracking the defects and recorded. This inspection is very costly and time taking.

Camera Inspection: High speed cameras are used in this inspection which are used in collecting the images or videos of railway infrastructure. Automated visual systems are used in this inspection which are analyzed automatically, and images are captured. Special images are analyzed using software to identify the defects or components. Depending on the nature of the inspection, speed can vary from 60-320 Km/h. But this fails in collecting the internal defects.

Track Geometry: This is an automated track inspection which insects all the geometrical parameters and doesn’t obstruct any railroad constructions or operations. Track geometry defects results in developing dynamic forces between train and rails. These parameters are measured in gauge, alignment, position and curvature.

Ultrasonic: In 1927, Dr. Elmer Sperry introduced the ultrasonic inspection into the railway industry. In this inspection, ultrasonic energy is transmitted into the railways by beams. Transducers collect the reflected energy from the beams. The amplitude value results in the state of the rails. 90-95% accuracy is obtained. For safety and security reasons these are operated at 45km/h and in high weather conditions there are limitations.

LIDAR (Light Detection Ranging or Laser Imaging Detection and Ranging): This technology is introduced into the railway industry for measuring the ballast and surface of the track. Distance is measured and targets the other properties by remote sensing technology. By using laser and reflected it can analyze the distance.

Ground Penetrating Radar (GPR): This technique is introduced into the railways for measuring the ballast, radar pulses are used to track from top to bottom of the substructure. GPR also surveys the conditions in ballast and underground problems such as air voids, water considerations and inhomogeneity issues. These can track the speed of 180km/hr. Antennas are connected so that the speed is easily calculated.

Laser Crack Measurement System: 3D laser technology is used in this technique to measure the rail gauge and transverse railway infrastructure profiles. This is very economical and owned by all railway transit agencies because they are mounted on hi-rail vehicles. This is also useful in identifying the cracks and detects the broken or missing fasteners.

2.3 Manuals of the Railway infrastructure:

The first and fore most task in the condition assessment is the inspection of the rails. This assessment is used to decide, maintain and rehabilitate the service life of the rail assets. Henceforth different countries and companies have come up with various manuals to achieve the goals. These manuals explain about the defects in the rails and their limits also about the inspection methods of those defects. These manuals also explain about the standards of the safety that should be considered for the goods and passengers safety. AREMA (American Railway Engineering and Maintenance of way Association) (AREMA 2010), FRA (US Federal Railway Administration) (Office of Railroad safety 2014), and Rail Corp Engineering manual have been reviewed (Wilson, 2011).

American Railway Engineering and Maintenance-Of-Way Association (AREMA Manual) comprises of information, plans, standards and financial practices of building, outline and development of railroads (AREMA 2010). This manual is created by AREMA specialized boards of trustees in the US. The AREMA Manual can't be utilized as a support manual since the improvement of benchmarks or criteria for the upkeep of railroads, streets, tracks and structures has dependably been viewed as the right of individual rail routes, considering the nature and qualities of their plants and activities and the qualities of the topographical region(s) where they work.

Government Railroad Administration Manual created by the Office of Railroad Safety at the US Department of Transportation comprises of plan angles, investigation research methods and imperfections that happen; it additionally incorporates the security gauges of rail routes (Office of Railroad Safety 2014). The manual comprises of least security gauges and can't be utilized for upkeep issues

Rail Corp in Australia built up an accumulation of manuals for the diverse segments, examination strategy defects, upkeep procedures and plans for railroad framework. The diverse manuals are accessible online under the name of TMC manuals. These manuals are received for and are generally utilized in this exploration to characterize the imperfections and the defects in the rails and their severity. The two most utilized manuals are TMC 203 Track Inspection (Wilson 2013) and TMC 224 Rail Defects and Testing (Wilson, 2011). TMC 203 Track Inspection comprises of prerequisites, procedures and rules for the administration of track resources and investigation exercises. It likewise gives working points of confinement to track condition estimations and required compulsory activities when the breaking points are come to. The TMC 224 Rail Defects and Testing manual portrays the rail absconds, rail imperfection impediments and review procedures for the rail appraisals.

2.4 Research on the Infrastructure of the Rails previously:

The previous research on the rails have been referred to get a better understanding about the infrastructure, defects, assessments of the conditions of rails, maintenance etc. These researches help in assessment of the condition in the infrastructure. The assessment is done on the compartments of rails, sleepers, ballasts etc. (Sadeghi and Askarinejad 2011) based on the inspection done visually. The rail tracks are classified in to four components i.e. Ballasts, Rails, Fasteners and sleepers. A technique named weight deduction has been adopted to form a quality index for every component of the rail track. Hence four kinds of the indexes are formed such as the Rail quality index (RQI), Ballast quality Index (BQI), Fastener quality index (FQI), Sleeper quality index (SQI) and another index was formed for the overall quality assessment named as the track quality index (TQI). These mainly depends on the defects in the tracks and the level of their severity. The table below indicates the levels of the severity such as low moderate and high.

Table 1 Levels of severity in tracks (Sadeghi and Askarinejad 2011)