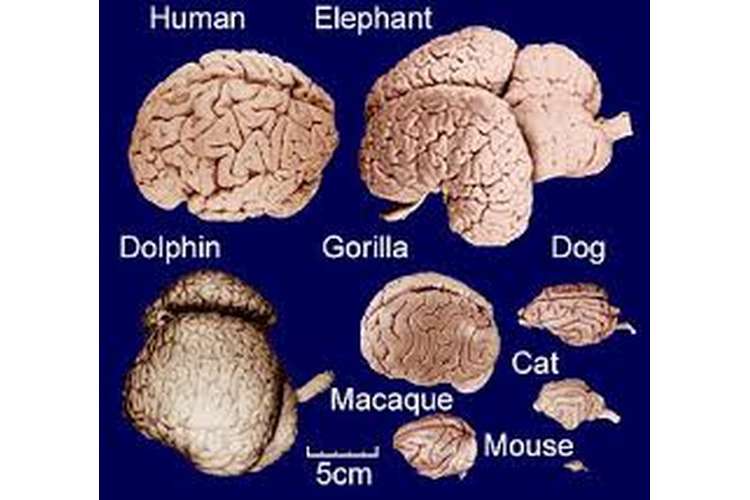 Several studies and researches have linked the size of the brain with intelligence. It is a general observation that the brains of men are bigger in size as compared to women. Then correlating the two observations, it can deduced that the intelligence level of men is higher than that of women. But whether this correlation holds valid or not in the real world is the question that needs to be answered via this study. Numerous studies have conducted analyses of the correlations existing between the size of the brain and intelligence.

Andreasen, et. al (1993) made use of magnetic resonance imaging scans to determine the relationship between the IQ levels and different brain structure measures, such as intracranial cavity, lateral ventricles and temporal lobes. The tests prove that some amount of human resource  is highly affected by the size of cerebral structures present in human brains. Some correlations between the full-scale and performance IQ and the brain structure measures are demonstrated by the authors. Halpern, et. al (2000) look at the sex differences observed in the level of intelligence of people. The authors demonstrate that while the level of general intelligence remains the same, the cognitive abilities of males and females differ due to various reasons.

Keeping the brain sizes and the sex differences in mind, authors like Nyborg (2005) have made use of different factors and scores to determine the relativity between sex, brain sizes and intelligence level. It is shown that males possess more gray matter and less of white matter and hence it is shown that a partial cause of male dominance in the society can be the brain sizes. The usage of different brain imaging techniques has also been used and tried to establish correlations between age, sex with the brain size. Rushton & Ankney(2009) has adopted this method and proved that the intelligence and brain size of humans are highly interrelated, however the brain size of any species or individual is shown to be highly dependent on the external conditions present around the individual.

Considering the results of the studies that have been conducted on the topic, one thing is clear that no study has established a link between sex, brain size and intelligence. Different authors have taken into account different variables and hence to get clear understanding of the topic, the data collected for the study includes different variables. In addition to the gender, the data provides scores of full scale intelligence quotient (FSIQ), which is an indicator of the cognitive abilities of a person. Other measures of intelligence include VIQ (Verbal Intelligence Quotient) that measures the language abilities of an individual and PIQ (Performance Intelligence Quotient) that examines the nonverbal and mental abilities of people. These variables are complete indicators of the aptitude of people.

In addition to the intelligence indicators, the data also presents the height and weight of the people in question, as the height and weight of a person are found to be related to the size of his/her brain. The MRI count also is indicative of the brain functioning and activity, as diagnosed with the help of magnetic encrypion technique. Thus, the data provides complete information that can help in establishing correlations between the brain size and intelligence level in people. In order to test the data for reaching adequate conclusions, a hypothesis can be derived that can be then accepted or rejected on the basis of data analysis.

Hypothesis:The brains of males are bigger in size than that of females and hence they are comparatively more intelligent. 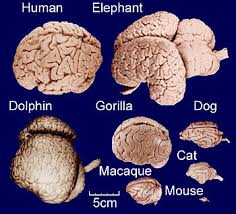 The general statistics of the given data can be summarized in the following table:

The table above gives a general overview of the data and how the data and the variables within have been divided. A gender wise presentation of data is what would help in explaining the differences observed due to different gender. 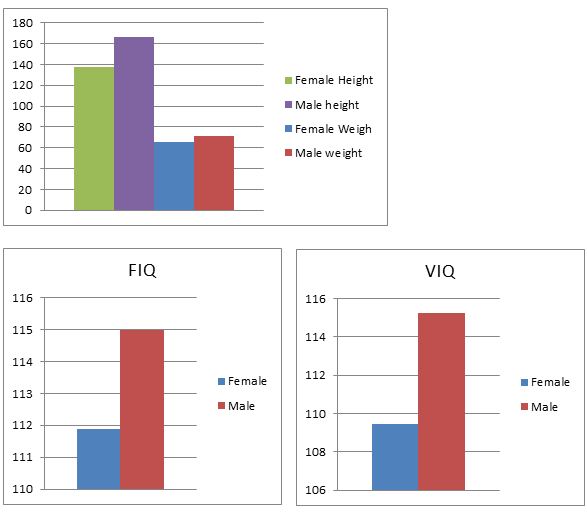 The average values of each variable have been taken and the same has been plotted against the gender. The size of the brain is considered to be proportional to the height and weight of an individual. It is shown that the average height, as well as the weight of the males is higher than that of the females. When examined the correlation between the IQ scores and the gender, it is observed that all the IQ scores are higher for males as compared to females. However, the differences are not very high. The IQ scores are more or less similar and hence it cannot be said for sure that males demonstrate higher IQ scores as compared to females.

For More: Nursing and Community

One thing that is clear from the analysis of the given data is that males have bigger brains as compared to females. With higher height and weight, their brain sizes are also bigger. This is even demonstrated by the MRI count of both the genders. The average MRI count of females is shown to be way lower than that of males. Females demonstrate an average MRI count of approximately 862000, whereas the average MRI count for males is 954000. This shows that the brain sizes of males are definitely bigger than the brain sizes of females. But if the brain sizes influence the intelligence levels is still a question that remains unanswered. The difference between the different IQ indicators is shown to be very low and less among males and females. Thought the full scale intelligence quotient and other IQs are found to be higher in men, the difference in their levels among females and males is very low. And hence it cannot be certain that the difference is because of the gender. And hence the impact of the MRI count on the full scale IQ score has been also determined, which shows that high FSIQ scores lead to higher MRI count and vice versa but again the relationship is not valid for all data points.

The development of the MRI and other technologies has made it easier for us to evaluate and examine the functioning of human brains. The data undoubtedly demonstrates a positive linear relation between FSIQ and MRI count but again the same is also found to be correlated to the body size. Though there are some basic relationships that can be established on the basis of the given data, nothing can be specified with certainty because there may be several other factors other than gender and body size that can affect the IQ levels. Hence, the hypothesis described above can be rejected. The hypothesis can only be proved with a bigger data size or by including additional factors to prove the point.