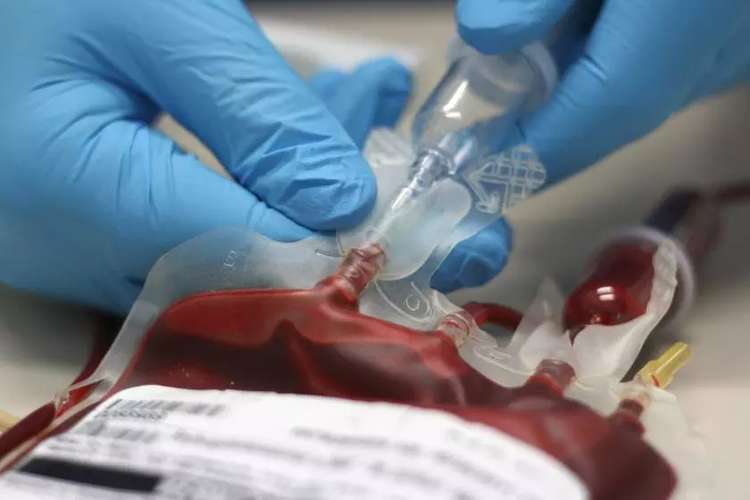 The cross match incompatible transfusion is consisting of infusing the red blood cells as donors into the body of the recipient those who have the antibodies against the antigens on the donor RBCs. In general field of the heath care profession, the incompatible transfusions of the red blood cells are strictly avoided as it has some side effects associated with it. Hemolysis of the transfused RBCs can occur to the potentially fatal outcomes in a negative manner. This occurrence is named as Haemolytic transfusion reactions (HTRs). But some cases the cross match incompatible RBCs transfusion is done purposefully. Thus, the report has discussed that in which method the transfused incompatible RBCs are cleared out from the circulation so that it will not cause any further harm or any circulation problem inside the human body.

The transfusion therapy of the red cells are most common in the health care and clinical practices. During any application of the drugs to the human, along with the blood circulation process, the unwanted and incompatible RBCs get generated. To maintain the proper flow of the circulation all over the body for the proper organ functionality, the removal of those incompatible RBCs are require. The study of various researchers have revealed the fact that Alloantibodies against the incompatible RBCS can cause the haemolytic disease of the fetus and the new born to the pregnant lady resulting to the adverse situation like Substantial morbidity. To avoid the situations, it is required to have a clear idea regarding the mechanism so that the unwanted and incompatible red blood cells are cleared out from the circulation through the definite mechanisms so that he substantial morbidity rate can be decreased.

In this case scenario, the occurrence of haemolysis which is the resultant factor of the antibody infusion can be described with the help of two mechanisms. The Intravascular haemolysis can take place in the RBC transfusion at the time when the complement is activated enough to for the MAC (Membrane attack complex). This is causes completely due to the immunoglobulin binding to the surface of the RBCs. It also occurs some time IgG. The RBCs also can be opsonized which is considered as the best immune process and injected by the phagocytes. This process is effectively referred to as the extravascular hemolysis. This, both the intravascular hemolysis, and the extra vascular hemolysis take pace. In this process if complement activation will not lead to the formation of MAC, then the intravascular hemolysis take place in a rapid pace. Thus, C3 get deposited on the surface of the RBCs.  The deposited C3 can get converted to the C3B and iC3B. Here, the complement receptors can target the C3b coated RBCs. As the second option, the opsonisation of the antibody infusion can take place as a result of Fc domains of IgG those are bound to the RBCs. This reaction is identified with the help of the extravascular process on phagocytes by Fcγ receptors.

After the discussion of the infusion of the incompatible RBC transfusion, the canonical pathways will be discussed as the clearance option. This suggested method doesnot contain the complementprocessor the FcγRs process. The antibody binding process can be given preference with the direct effects of the targeted RBCs which are required to be cleared out from the body. The programed RBC death can be done with the help of the process of Destabilization of the membrane of RBC to be cleared out those are incompatible with the circulation. In this process, the antibodies can be mentioned as the media of the direct induction of the phosphatidylserine which is caused due to the ligating phosphatidylserine searchers receptors of the phagocytes. On the other hand , the mechanical induction if Ca2+ influx to the target RBCs leading to the eryptosis also can be mentioned as the direct impact on the surface binding of the antibodies in an effective manner. The above mentioned pathway usage are exclusive and there are also chances of these pathways to get overlapped during the application process. From the aspect of the HTRs, the usage of these two pathways have raised the questions against the mechanisms, but they also have been identified in Vitro. Thus, these pathways processes’ results for the clearance of the RNCs are in doubt. This has resulted to find some other mechanical way to clear out the unwanted RBCs from the circulation.

As an alternate method, the utilization of Vivo murine model of the incompatible RBC transfusion use to involve the IgG antibodies against hGPA (Human glycol A). During the implementation of the model, the 6A7, and 10F7 mouse monoclonal antibodies use to identify the antithetical M Human blood group antigen or hGPA. As an example, the experiment can be done on the animals to reflect the successful rate. The mouse has been selected for the experiment of the removal of the unwanted RBCs for the circulation. For the application of the process of the RBC cells removal for the smooth circulation inside the human body, both the extra vascular and the intravascular methods are justified. 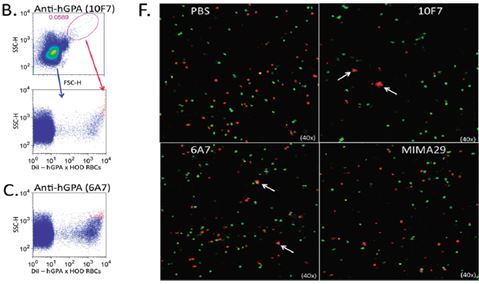 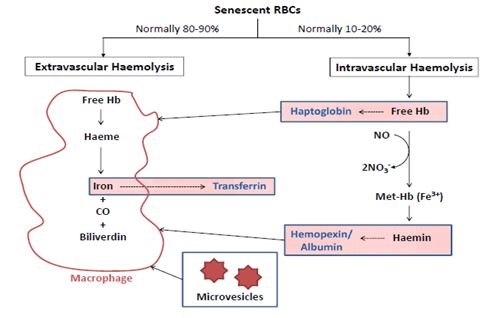 Once the haptoglobin scavenging capacity use to get increased, the remaining incompatible free RBCs get scavenged endothelial derived NO in order to form methemoglobin. The formed methemoglobin use to get converted to the haemin. It use to get rapidly cleared out from the circulation and also get transferred to the liver membrane by haemopexin and also by albumin.This conversion use to protect against its potent pro inflammatory and the pro oxidant effects. In this manner, the intravascular clearance of the incompatible red cells protects the circulation process from the toxic effects due to the free haemoglobin and haemins.

The extravascular haemolysis process involves the reticuloendothelial macrophages which use to recognise and phagocyte not only the incompatible red blood cells senescent ( old red cells those are also treated as the incompatible red cells for the effective circulation process) but also recognises the haptoglobin – haemoglobin and haemopeixn – haemin that use to form during the intravascular process. During these process, the scavenged haemoglobin and haemins are catalysed by the haeme – oxygenise – 1 to carbon monoxide, and also to iron. The major portion of the removed iron is buffered and also use to get stored with the macrophage and the remaining portion get released into the circulation where it is compelled by the iron carrier protein transferrin.

Figure 3: Schematic of proposed mechanism of biphasic HTR involving neither C3 nor Fc domains of bound antibodies binding to 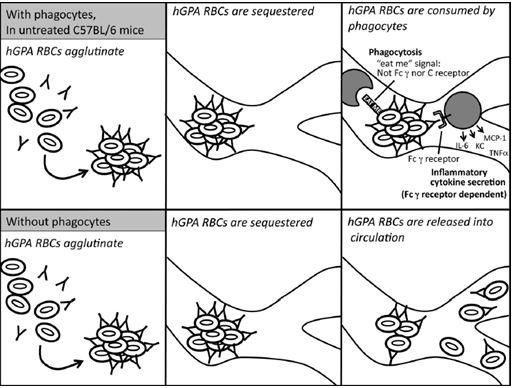 It is also important to discuss that as during the progression of the first phase , a burst of the serum cytokines takes place , the FcγRs are not required to clear out the hGpA RBCs bit , it is required to  clear out the serum cytokines in an effective manner. This process sue to indicate the fact that RBC attached IgG antibodies are tied up with the surface  FcγRs surface and also send the signals into the cytokine secreting cells in continuous basis. In this manner at the time when the sequestered IgG layered RBCs hits a phagocyte, two different signalling events takes place. They are as below:

1.FcγRs are tied up with the cytokine bursts

2.Signals other than FcγRs , and C3R persuades inside the phagocytes

Though the clearance process through theFcγRs and complement has discussed but the proper implementations on the humanbeing have not been proved up to the ark and the tests have been done on the lower levelledanimals based on the incompatible transfusions and the different antigens of the blood groups. In the complete discussion of the transfusion process of the incomputable RBCs, it is most importantly required to mention that the failure of the complete clearance of incompatible RBCs do not indicate the aspect of lack of the efficiency of the process. In the course of this discussion, if the FcγRs will not be able to completely clear the incompatible RBCs, they are well efficient to reduce the rate of the morbidity due to the effect of the cytokine storm in an effectivemanner. Thus, the prevention is supported by the usage of FcγRs rather than complete cure by removing the incompatible RBCs for the target body to maintain the smooth circulation. Thus this support will be proved as beneficial for the autoimmune haemolytic anaemia. Therefore though C3 and FcγRs are likely to play an important role in the prevention, the alternative pathways such as Intravascular and the extravascular transfusion are required for the complete removal of the incompatible RBCs in an effective manner.

Over many years, we have observed the continuous progress in the field ofthe removal of incompatible RBCs for the proper circulation of blood all over the body along with the properfunctioning of the body organs. The discussion has revealed the fact that C3 and FcγRs are the good controller and the preventer of the ill effect of the incompatible RBCs, but they are not sufficient enough to remove them completely. In this aspect, the alternate pathways in terms of the intravascular and the extravascular transfusions can be recognised as the important process. The report also has revealed the fact that all these process have been proved good on the lowerlevelledanimals rather thanhumanbeing. But, the recent studies are progressing to reflect the implementation of these processes for the removal ofincomputable RBCs for the human bodyin an effective manner.