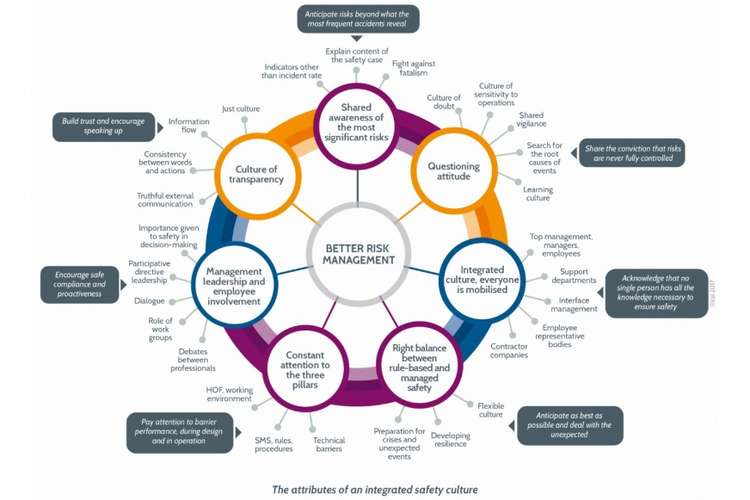 The assessment of offshore safety environment in workplaces has been an overarching research topic in the last few decades. Most of the time, this topic has been assessed by use of Likert-scaled survey instrument and previous results have shown that there are potential number of latent factors that do account for offshore safety environmental perceptions. This research will aim to study the organizational Safety Culture of MDPC Company basing on both qualitative and quantitative measures. MDPC is a joint venture company between SBM Offshore and MISC Bhd. The company has a total of 145 employee benefits and the highest reporting rank is the board of directors. MDPC is headquartered in Kuala Lumpur Malaysia but has offices in Labuan and Monaco. All the administrative work, as well as financial/accounting, procurement and HR duties, are carried out in Kuala Lumpur while Labuan deals with logistic issues and Monaco deals with Tech related issues/support (e.g. production and maintenance).

Offshore environment are areas that are located next to large water bodies; seas, oceans, lakes and rivers. Such areas are exposed to various calamities arising from the ocean either natural or man-made[ CITATION Har98 \l 1033 ].

Climatic and weather patterns have always resulted to rising sea levels, earthquakes and floods resulting to the loss of lives[ CITATION JKM01 \l 1033 ]. Large ships transporting gases and oils have caused several deaths whenever spills occur in the oceans. Mining operations with the areas have also resulted to emission of gases and dangerous minerals that have for several occurrences polluted water and the water users.

Improving awareness involves adjusting the already existing means of creating awareness and coming up with new ones that can ensure maximum control to the catastrophe arising from the offshore environments[ CITATION JKM01 \l 1033 ].

To cope well with this, people in such environments should be made aware of the problems and how to avoid them. This calls for the study on how awareness will be improved in the offshore areas.

Offshore environments have for the past times experienced several calamities. This has taken course in several sectors; manufacturing, transport, mining and even natural calamities. Attention is therefore diverted to ways through which such can be prevented. Creating awareness being one of the means, should be promoted among the workers, manufacturers and residents in the offshore environment. Proper awareness created either quantitatively or qualitatively or both will result to reduced incidents of catastrophes associated with the offshore environments. This makes the statement of the problem.

The main objective of the research will be to determine better and effective ways of creating awareness in the offshore environment. This will include both qualitative and quantitative measures.

The research questions will include:

The significance of the study

The study will be relevant in reducing the accidents and catastrophes experienced in the offshore environments. From the qualitative and quantitative ideas given by the people, people will be aware of the times of hurricanes, weather flows, increasing ocean levels. People will be able to handle properly spills like oil spill in the seas hence avoiding death of living things. Individuals will be much aware of the risks incurred in sea operations for example, how to dress up among the workers in the offshore drilling of oil and even how to handle gases emitted from the mining process.

Significance to the Industry

The study will be of relevance to the company as well as other players in the industry in coming up with measures to reduce the accidents and catastrophes experienced in the offshore environments. From the qualitative and quantitative ideas given by the people, people will be aware of the times of hurricanes, weather flows, increasing ocean levels. People will be able to handle properly spills like oil spill in the seas hence avoiding death of living things.

From the extension of offshore drilling operations, there has been a result of more complex and risky borderlines. The steady and worrying risks arising from this has diverted industrial focus on the situational awareness and safety processing[ CITATION Har98 \l 1033 ]. The operations always experience additional monetary problem and time wastage whenever there is failure at any of the accounts. Workers have also reported instances of either psychological or physical or both problems which stimulates luckless and unfortunate incidents.[ CITATION Har98 \l 1033 ]

Situation awareness (SA) is believed to be rightfully associated with meta-cognitive abilities of mankind. It has been conceived as directly associated with meta-cognitive faculties of human, yet enumerating the mental abilities of man while operating the systemic atmosphere tangibly is a far-fetched idea. The door to such ideas is basically the Eye-tracking. This is a long time idea that has taken several diversities in implementation to various fields such as aviation, weather and climate and even in the field of medicine. From the experiments conducted in the Virtual Reality Drilling Simulator (VRDS) equipped with eye tracking technology, the ocular activities of participants were recorded and analyzed to bring on board their behaviors. The cameras in the device recorded the characteristics of the participants’ behaviors. From this, the size of the pupils and the eye fixation count were all recorded which was later used for answering hypothesis[ CITATION Kan15 \l 1033 ].

The change in weather patterns and climatic trends also require the weather men to give proper and on time conditions so as to make the people aware and the authority concerned to act.

The Bureau of Safety and Environmental Enforcement (BSEE) in the US interior department has a goal of developing, administering and implementing control program that ensures lessees, operators and contractors operate an environmental friendly manner during the exploration of minerals such as oil, natural gas and the renewable energy sources [ CITATION Kac16 \l 1033 ].

Quantitative method involves measurement of observable phenomena while qualitative methods engages ideas, opinions and trends of events. This involves several methods for biodiversity and ecosystem management[ CITATION Bur98 \l 1033 ]. This implies that the project will engage both factors in arriving to a conclusion of proper ways of promoting awareness.

Limitations of the Research

The study will experience several limitations but not limited to:

1. Cost of transport to the offshore environments may be high;
2. Uncooperative and unruly respondents who may give insincere answers;
3. Offshore areas being with sometimes unfavorable weather and terrain, there will be a challenge in travelling

Situation awareness (SA): this refers to informing the people affected/ to be affected on the possible dangers of a specific activity that is likely to occur in the area.

R-program, STATA and SPSS: these are statistical packages applied in data analysis.

The Bureau of Safety and Environmental Enforcement (BSEE): This is an environmental body in the USA in charge of controlling offshore and seas operations to ensure the environment is well protected.

Eye tracker- this is a kind of technology where eyes are dressed with the machines capable of reading the pupil sizes and movements that will then translate to the drilling effects on the eyes conclusion.