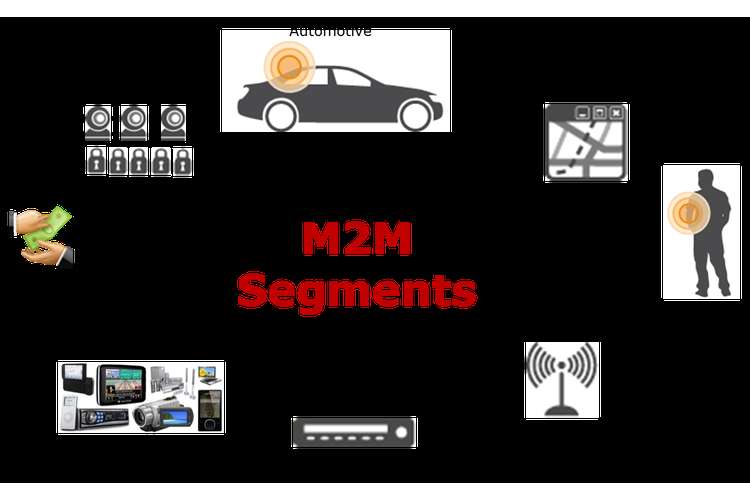 M2M communication technology is one of the most growing fields in present age but brings lot of challenges related to security which are not being addressed by the traditional communication channels. Since M2M communication devices comes with low cost, unguarded and works over distributed channel so it is difficult to manage security systems in these devices. There are several challenges which are still unattended for these devices and present paper would tend to look into various threats related with M2M communication devices. Present paper would explore the various threats related with M2M technology, use cases for M2M technology, TRE application for subscription management and development of trust environment in order to safeguard against possible security threats.

Machine to machine (M2M) communication technology is used to communicate with similar device through wireless and wired system. M2M communication process is an integral part of the Internet of things (IoT) and there are lots of benefits sought by businesses through M2M. Some of the key applications for M2M communication process would include smart citizen, health, defense, industrial automation and logistics etc. In present technological age internet protocol version 6 (IPV6) would be required so that large space required by the IoT can be accommodated. Success of M2M as an integral part of IoT would largely depend upon the adoption of IPV6 in coming time (Leicher et al, 2009).

There are several challenges offered by M2M communication technology along with the key benefits. The major issue faced with the M2M communication technology is security feature which has not been addressed by traditional machines till date. Since machine to machine technology and wireless devices networking come with the feature of mass deployment, low cost and unguarded so they invite range of threats in relation with the security of these devices. The security threats prevailing in the M2M technology can’t be completely addressed by the use of security systems deployed in these devices.

There are several use cases defined for the M2M communication systems by the standard organizations around the world. Present section of the report would deal with the important use cases and requirement of security in the particular use case for M2M communication technology. Use case or applications discussed in the present section would be having some common security requirement for M2M but due to critical information handled by these devices it is of immense importance to ensure security of devices being used in the organization. Use cases for M2M communication technology are given as under:

a. Traffic cameras: It has been generally observed that traffic cameras with cellular connectivity are being used in the general motorway or passways in cities. These cameras are being used to manage and monitor overall traffic on the road. These cameras deployed in entire city would be connected to each other so that continuous monitoring can be done. Connectivity between these cameras is established with the help of WLAN connectivity. One of the major benefits for connecting these cameras deployed on road would be to measure the average speed of the vehicle (Camenisch, 2014).

b. Metering: In every households and offices there are meters deployed in order to measure the utilization of gas, water and electricity. Usage measuring process is time inefficient and therefore becomes the costly affair. Automatic meters are deployed in order to record the utilization and send this data to central database system wherein bills are being issued based on the utilization. With implementation of the smart metering technology it becomes compelling for household and offices to monitor the usage of these vital resources so as to optimize use of energy on real time basis.

d. Asset/cargo tracking: These devices are being used in order to allow user to monitor movement of cargo, critical parameter tracking and performing remote commands given by user. Usage of M2M communication technology is done for cargo tracking in areas where in physical access to the cargo is not possible. Such kind of environment is created in order to protect cargo from threat and resist theft (Chaum, 2009). Placement done for cargo in this way would lead to the fact that it is costly to physically access cargo.

Some of the key features for which M2M devices are being used include low cost, does not require human intervention for long time, small and can communicate through WLAN or WAN. There is not much requirement for human intervention in M2M devices and they can operate through remote. Further it has been observed that most of M2M devices would be deployed in large quantity and would be mobile due to which it is not feasible to deploy personnel in order to manage these devices. Due to these features there are several vulnerabilities introduced for threat in M2M devices and wireless communication systems over which communication take place. Some of the key categories of security vulnerabilities associated with M2M communication technology can be given as under:

Protocol attack on device:These attacks would be directed against the device connected to M2M communication system. Some of the protocol attacks on devices would include man in middle attack for the first time network access, compromising a device with exploitation of the active network services and attack on the OAM.

Identity privacy attack:These attacks would include eavesdropping for other users or data sent over the UTRAN.
All these threats are having high importance as there can be loss of data, intrusion from unauthenticated user and undesirable activities in the M2M communication system established. Vulnerability level of each security threat mentioned above would depend upon the importance level of data present in the system, type of attack, intention for the attack and capabilities of the security systems to safeguard the data or systems against such attacks.

a. Introduction for the trusted environment 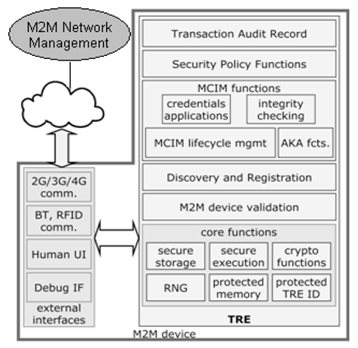 Figure 1: Showing the components of TRE in M2M device

b. Requirement, functionality and interface

As shown in figure 1 above that software and database management systems present in the M2M communication devices are separated from the communication system developed in the system. This would help in developing trust environment and ensure safety of the data and software present in the system (Gross et al, 2011). Database system and software are divided into two parts which are core functions and subsidiary functions. Core function of the system would include secure storage, protected TRE ID, protected memory, RNG, crypto functions and secure execution etc. Subsidiary functions involved in the device would include M2M device validation which would help in authentication of the device, discovery & registration, MCIM lifecycle management, integrity checking, security policy functions and transaction audit records etc.

Trust environment would provide the cryptographic functions in order to ensure security of the system. These functions would include symmetric and asymmetric encryption and decryption process. Storage data can be inside the TRE or outside the TRE but there would be high level of security formed for data. This data would be encrypted and a key would be stored inside TRE to decode the data. TRE would also establish the secured channel in order to make communication with the other parts of the device but these parts needs to be outside TRE. There are two types of interface which can be present in the present system and these are protected interfaces and unprotected interfaces (Morales, 2013). Protected interfaces would be providing integrity protection and confidentiality of the data present inside the system. Security protocols can be used in order to maintain confidentiality of the data. In case of usage for security protocols inside the organization it is important to deploy the authentication methods for suitable TRE communication.

(v) Verification of trustworthiness for M2M

There are two major aspects for the specific requirements and security threats available in M2M communication related devices are demand for high flexibility & configurability of the equipment and unpredictable connectivity to the core network. Both these aspects of M2M devices would take place at the particular instant of time and interaction with the network should be taken into account so as to apply this for the broad range of use cases in M2M communication systems. These systems can provide highly effective in order to implement the cost effective and optimal systems for M2M communication systems (Bernstein, 2014). Security would be an important element in order to resolve technological problems encountered above and to fulfill the below given two goals:

These objectives are most critical element in order to play the protection goals and to change the status of goals in controlled way. Stakeholders, M2M device owners and network operators have suitable interest in order to validate the M2M devices. Validation can be defined as the process to check the state of security relevant properties for a particular system. Testing means for a system would be different in its pre deployment and after deployment phases. There are basically three types of validation which can be done for the M2M communication devices and these three are autonomous validation, remove validation and semi-autonomous validation. Autonomous validation is being done for the closed systems such as the smart cards etc which do not have any communication with the exterior devices for communicating their state information. 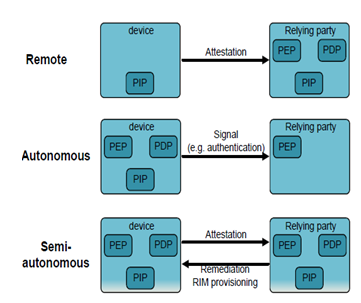 Figure 2: Showing the mapping variants for the validation process

For 2G and 3G mobile services subscription is being offered with the help of UICC card which is deployed in the subscriber identity module. Figure 3 below shows the network architecture of the architecture alternative: 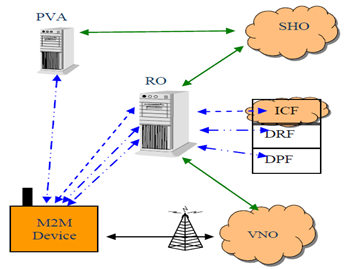 As shown in the figure 3 above that M2M device can be obtained through air interface provided in VNO. Provisional IP connectivity is provided by the registered operator (RO) with the help of initial connectivity function (Chaum, 2009). Discovery and registration function is also provided with the help of RO system. This functionality would help the M2M device to search for the selected home operator (SHO). Once M2M device would find SHO then it will download the SHO subscription network in a trusted network environment. Before allowing the download it would first check the authenticity of the device. Authenticity of the device is checked with the help of platform validation authority (PVA).

Usage of M2M communication systems are growing day by day and have lead to several use cases for the M2M devices in the organizational context. Due to the nature of M2M devices being used in the systems having characteristics such as unguarded and using distributed network there are lot of security threats arising for these devices. With evolution of these threats for the M2M communication devices there is requirement for the new security measures and requirement of flexibility as well. It is imperative to build the paradigm shift which would lead to development of the trust environment in organizational settings. There are two important building blocks for the formation of trust environment within these systems and these two building blocks are local state control which is developed through secured boot and semi-autonomous validation. With help of implementing unique requirements for M2M markets it is important that remote management of platform and subscription management is possible for M2M devices. The ideas presented in the above paper would help in order to explore for the new business opportunities in field of M2M communication devices. Further in order to enhance security for the M2M devices it is imperative to build hardware backed security so that threats for M2M communication devices can be avoided.