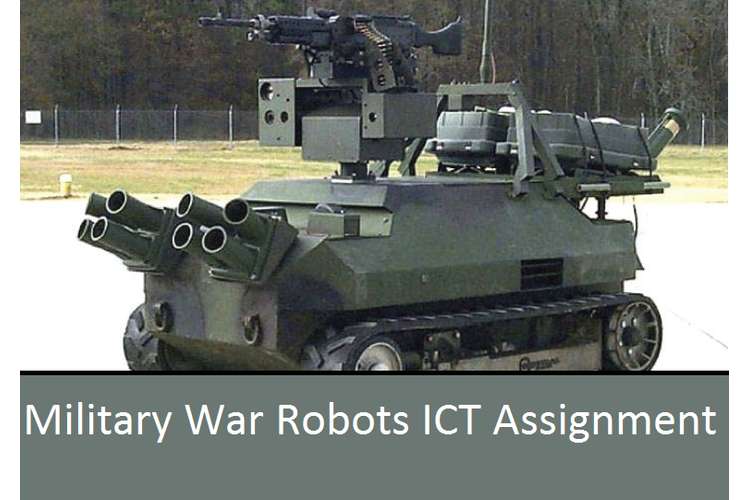 This Solutiuon of Military War Robots ICT Assignment in which explain information and communication technology used in military autonomous robots.

The augmenting application and burgeoning information and communication technology use has experienced an uprising and has attained support by means of manifestation and advancement of novel computer technologies. The techniques and approach of making use of the accessible information has caused some ethical and moral dilemmas, which are acts that are ethically questionable (Williams, 2013). In some of the years in the past, people’s everyday lives have gone through a conversion and revolution by internet being introduced. This was a prevalent accomplishment in the sector of ICT. Internet is a remarkable mode for interconnecting computers. These kinds of developments in the field of information and computers carry with themselves certain ethical dilemmas as well, with the various benefits, which they are meant to offer.

One of the prevalent and currently discussed sectors, where questions of ethics are being debated is Robotics. Robots are designed mainly for carrying out intelligent interface with the environment. In many forums, it has been stated that there is great influence that robotics will bring to the lives, and this impact would be more or less be the same extent that has been done by the internet (CCC, 2013).

The war robots refer to the autonomous robots or devices that are controlled by remote and are used in military/war applications. The concern is thecommunication development of ''autonomous targeting'', where military ground vehicles and the unmanned planes are engineered in a manner so as to automatically lock on to whatever and whoever their computers onboard may assume to be an enemy. There is an ongoing research for enabling ground vehicles and unmanned aerial for working collaboratively; making sure that every machine chooses a distinct target. The manufacturers of defence equipments maintain that there would always be a man available who would be controlling in the loop for authorising operations and that the war robots are much lesser unsystematic as compared with the bombing of air force saturation took place in World War II. (Fairfax Media, 2010) An ever going debate is ongoing on the use of the war robots and all the more now because of the speedy production of armed robots and military drone planes. The debate revolves around the subject if these robots should be subjected to international legal controls. There are certain groups which support the robots and mention their advantages such as, they are faster in processing information systems with humans, and they do not panic, fear, have a longing for vengeance or other emotions, which may cloud judgment by human. Robots can be used to acquire more accurate battlefield data that can help to target fire more precisely and in the process may save lives. (Bruce, 2013)

There are several concerns raised and hence there are curbs requested on the manufacture of war robots. There are fears reinforced that the strikes of unmanned aerial vehicle, anywhere the fights are fought in the future would tend to augment death tolls. As highlighted by a professor of robotics and artificial intelligence, Noel Sharkey, at Sheffield University, one of the major concerns is that these autonomous systems may also select the targets themselves and in this case they will pose threat on event their own army men. Another issue includes the possibility that in case they cause death of someone who was not supposed to be killed, who is to be held responsible for such an act.  There is a huge cost involved and there is need for high technology for every research and trial. There is dispute raised by the groups of human rights on the ability of such robots for meeting the international law requirements, including the capability of distinguishing amid combatants and civilians or for assessing proportionality. These kinds of programming machines may encourage more wars and may turn it out to be more problematic for holding anyone answerable for crimes of war. (NDTV, 2013)

The groups which will be impacted are the army, the general civilians, the other countries, and the manufacturers as well as the approvers of the use of these war robots. The groups may be benefited by these robots since they would save several lives by replacing lives of people in the tasks that are very dangerous. However, there is threat of more wars and of various unexpected and undesired killings that may be done by these robots if they select targets themselves or malfunction. In case of disagreement, an unacceptable incident of harm can occur.

There should be commitment, mutual trust, and integrity between all stakeholders. There should be clarity of the purpose and the features hat should be incorporated must be agreed upon by all the stakeholders. Realistic definition of scope is required, which should be based upon professional designing, prioritising needs ethically, and there should be ongoing support provided to the users. It is important to understand the actual needs of the war robots and should be maintained with best possible quality.

It is significant that the rules and regulations that are robotics related are improved enough that they are capable of dealing with the issues. It is essential that laws exist to determine, who would be held responsible in the instances of any unexpected or incorrect results in robots’ performance. If it would be the designer, programmer, manufacturer, or the machinist who would be accountable, should be established. To allocate such accountability, there should be comprehensive logs that must be retained by the independent systems. (Leaders, 2012). Appropriate arrangements can be made for the humans controlling the war robots.

Amongst all the available options, the best option that appears to be worth is that of collaboration between all the groups that are involved in the operation and functioning of war robot. They should all lay certain guidelines for the effective performance of the robot. This method would assist in checking all the possible ways and would present a war robot, which would not cause any harm.

It is equally vital that the dignity, effectiveness and the honour of the ICT profession is upheld by the groups involved. This can be understood with the codes of ethics laid by the Australian Computer Society (ACS). The conformances to the values of ACS include giving primacy o the interest of public, enhancing life’s quality, competence, honesty, and professionalism.

The robots’ replacement to fighters in wars would tend to violate Code of Ethics, as well as certain clauses to the Code of Conduct established by the Australian Computer Society (ACS) (Australian Computer Society, 2012). According to clause 2.2, it is important to protect the stakeholders’ interest under Primacy of the Public Interest. The  induction of war robots, as of now, is unable to protect the interest of the stakeholders, particularly the stakeholders who would be present on the war field. It still demands higher level of research and lateral thinking for correcting the judgment that may have to be made by these robots in an emergency situation.

As per the clause 2.3, an ICT professional must protect and defend the health and safety of those affected by their conduct. The issue with the war robots is that, in case of any kind of malfunction and disagreement, they can prove to be unsafe..

Clause 2.4 is about honesty that is required to be kept up through providing the information to public as well as the specific users, of the likely harm which may be caused by these robots so that people are aware how to manage the robots in adverse behavioural situation. There should be instant assistance in case of occurrence of an adverse event.

It is apparent that the domain of war robots is still unable to meet all of the codes of conduct. This is the reason why there are stringent laws observed in this field of science. The ICT sector growth considerably affects the community and people’s lifestyle. Nevertheless, like any other technology, some negative impacts are also present in the ICT sector. It is worthwhile to approach the sphere of influence ethically and to identify and curtail the unfavourable effects. The code of conduct as well as code of ethics laid by the Australian Computer Society must be adhered to and must be re-iterated to the manufactures, designers, and users of the war robots, while simultaneously expressing the results of the violations. Information, honesty, transparency, and collaboration are the prime conducts to maintain the ethical standards of robotics.

This technique of analysis is based on asking questions. The order of questions asked is very important so as to analyse the situation appropriately.

Q3. What are the issues?

Q4. Who is affected?

Q5. What are the Ethical Issues and Implications?

Q5. What options are there?

Q6. Which option is best?

The best option is the collaboration of all the teams to lay down rules for the effectiveness and performance management of the robot. This is because, all the possible ways would be checked and the robot will be prepared so that it causes no harm in anyway.