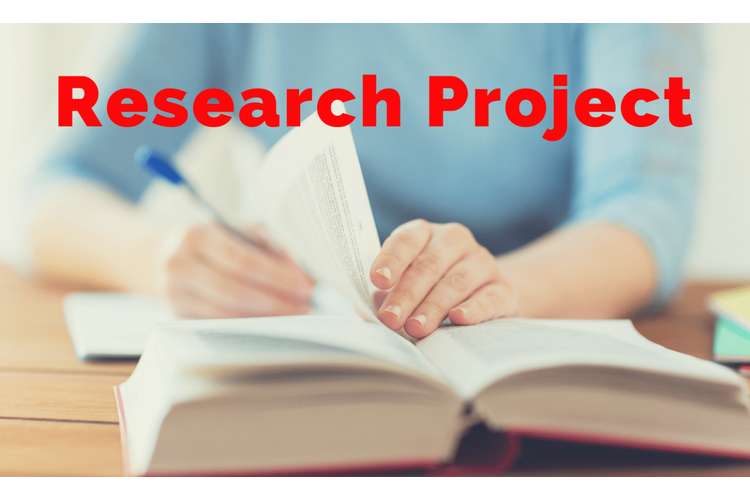 Various governments around the globe have passed legislation touching on the issue of climate change. These legislations are expected to reflect on the reduction in the number of carbon emissions in the respective countries. The legislation are however dependent on the implementation plan by the relevant governments’ agencies and most importantly compliance from the stakeholders in the climate change agenda.

This research paper investigates the roles that legislation and size of a company in terms of energy consumption, have in climate change. This is done by citing the case of three countries in the Americas; Canada, United States of America and Brazil.

Industrial contribution to activities that have fuelled this fast change in ecological conditions leading to catastrophic implications for the future generations have been since then widely discussed and addressed across all spheres. Industrial role in curbing climate change is therefore pose to be one of the prime challenges today (Liesen et al. 2015).

Taking into cognizance the social awareness as well as the real threat to the future implications, companies have been drawing up strategic policies that work to curb activities which are identified as the sources of the problem and committing to report on their activities as checks to such behaviour (Bebbington and Larrinaga 2014).

Greenhouse and carbon emission are one of the main information that many organizations are expected and encouraged to disclose as per of the carbon disclosure project (CDP). This is done with the motivation to reveal the strategies and commitment of the firms to reduce their carbon output which is one of the main avenues by which industries have affected climate (Hahn, Reimsbach and Schiemann 2015.).

Stakeholder theory deals with the ethical aspect of the managerial division of a business or any other organization. It is a conceptual frame work for policy making that considers the moral accountability of the organization and its management (R Edward freeman).

According to the normative theory of identifying stakeholders, any person or a group of people or another organisation who may or may not be an internal member of the organization with whom the organization’s interest ally is a stakeholder. They include consu3mers, shareholders as well as competitors and partners. The first people who come to mind when considering who holds the stakes at an organization are the shareholders.

However, besides the obvious, stakeholders include all whose actions and contributions influence company performance, like employees, customers and business associates other than shareholders (Bridoux and Stoelhorst 2014). These people hold the position to continuously challenge the organisation in how they manage and allocate their resources thus influencing their operational policies (Herold, Lee and Gunarathne 2018).

The stakeholder salience theory speaks about how stakeholders influence the management in their decision making process. They argue that stakeholders such as the consumers, shareholders as well as competitors and partners who may build pressure on certain issues could influence management to come up with the disclosure data as a testament to their commitment (de Aguiar and Bebbington 2014).

However, none of those have been seen to be consistent. Again, existing research, notable among which is Schreck and Raithel (2018)shows that firms commit to reporting on emissions out of the belief that by doing so they would establish image as environmentally conscious and therefore cater to the growing environmentally conscious consumers in the market. Liesen (2015). This study in particular makes use of stakeholder theory and statistical data analysis to explore the problem using empirical research.

The following section shows the conceptual model of the study. The control variable for this case focuses on the market pressures from consumers that is experienced by the firms and how they may interact with the size of the firm.

The following figure shows the conceptual model for the study. The IV is the independent variable, size of company (in terms of energy consumption), the CV is the control variable(s) and DV is the dependent variables which is the carbon disclosure level.

Figure1: Describing the Conceptual model for the Research

The sample data contains information on firms from all the industries that were available in the original dataset of the CDP Survey. The decision to include all the available industries was informed by the acknowledgement that every industry is a contributor to climate change.

An industry might be at the final stage in the cycle of a product, such as at a shopping mall, but the industry remains responsible for the other stages that the product has gone through. These stages start from the raw material stage all through to the supply chain. Therefore this research considers all the firms form all the available industries in the analysis.

The Account Name Variable represents the name of the firm or company whose data is being collected for analysis. In this research, this variable will be a control variable (CV).

The Country Variable represent the country in which the firm or company is located. For the purpose of this research paper, consideration has been given to the Americas. The data was collected for countries that are located in the following countries in the Americas; Canada, United States of America and Brazil. These four countries represent the four biggest economies in the Americas. The countries are high industrialized, hence making climate change an issue of interest in these countries. In this research, this variable will be a control variable (CV).

The GRI variable represents the nature of industry in which the firm operates. The research covers all the available industries from the CDP Survey dataset. This is aimed at get the net effect on all industries. In this research, this variable will be a control variable (CV).

The Carbon Emission Reduction variable represents the percentage reduction in carbon emissions between for the year 2012. The research considers one year as the period of study for the trend in carbon emissions for the firms and company’s in question. In this research, this variable will be the Dependent Variable (DV).

The results from the analysis represented in this paper can generally be considered as reliable and applicable for all the firms and companies in the Americas regardless of which industry the fall. The conclusions are however limited to the Americas and can only be applied to other regions in the world with extreme caution. The Americas may have political environment, social environment or economic environment that is specific for that region and significantly different from other regions globally.

However, the choice of countries (that is: Canada, United States of America and Brazil) does represent both Developed and Developing worlds. This can therefore allow the conclusions from the analysis in this research paper to be applicable globally to some extent.

The sample data had no missing values. The data was collected for 60 firms from the three countries; Canada, United States of America and Brazil.

The summary of the descriptive statistics of the independent variable, Climate Change Integration, is given in Table 1 and Table 2 below:

The summary of the descriptive statistics of the independent variable, Percentage Investment in Energy, is given in Table 3 below:

The summary of the descriptive statistics of the dependent variable, Carbon Emission Reduction, is given in Table 4 below: 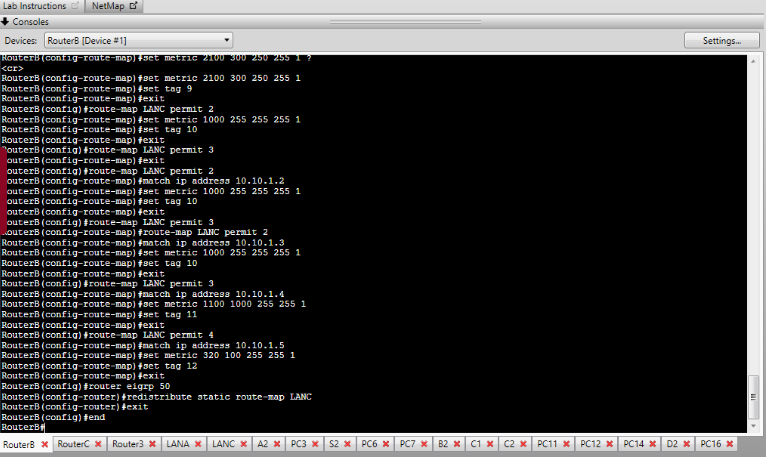 The normality for the Percentage Investment in Energy variable is given in Table 5 and Table 6 below: 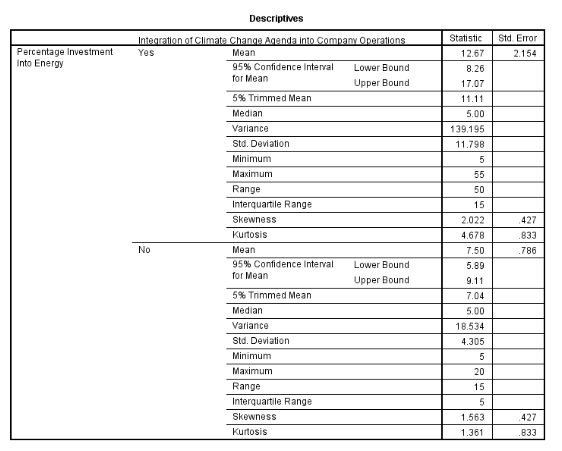 The analysis is Table 6 above show that for the companies that have integrated the climate change agenda into their operations the statistics for the Percentage Investment in Energy variable are as follows: Range = 50, Interquartile Range = 15, Skewness = 2.022, Kurtosis = 4.678.

In the case of the companies that have integrated the climate change agenda into their operations the statistics for the Percentage Investment in Energy variable are as follows: Range = 15, Interquartile Range = 5, Skewness = 1.563, Kurtosis = 1.361.

The normality for the Carbon Emission Reduction variable is given in Table 7 and Table 8 below:

The analysis is Table 8 above show that for the companies that have integrated the climate change agenda into their operations the statistics for the Carbon Emission Reduction variable are as follows: Range = 488.98, Interquartile Range = 12.38, Skewness = -5.385, Kurtosis = 29.281.

In the case of the companies that have integrated the climate change agenda into their operations the statistics for the Carbon Emission Reduction variable are as follows: Range = 26.60, Interquartile Range = 7.88, Skewness = -1.268, Kurtosis = 0.874.

The graphical analysis of the independent variable, Climate Change Integration, is given in Figure 1 below:

The graphs representing the relationship between the Carbon Emission Reduction and Climate Change Integration is given in Figure 2 below:

The analysis results presented in Figure 2 above show that there are one key outlier value on the boxplot for the Percentage in Carbon Emissions variable of the companies that have integrated Climate Change policies into their operations. This is the data point 29.

In order to have accurate analysis results, the outlier data point will be removed from the dataset by omitting the entire observation of the data point. This results in a dataset that is free of outliers.