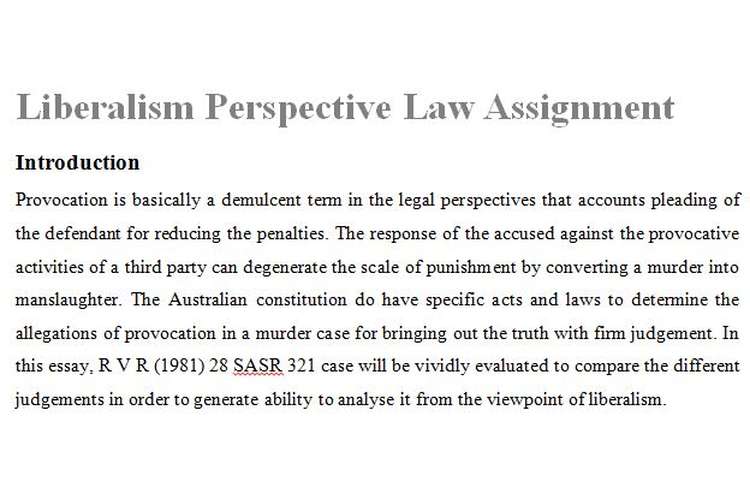 Provocation is basically a demulcent term in the legal perspectives that accounts pleading of the defendant for reducing the penalties. The response of the accused against the provocative activities of a third party can degenerate the scale of punishment by converting a murder into manslaughter. The Australian constitution do have specific acts and laws to determine the allegations of provocation in a murder case for bringing out the truth with firm judgement. In this essay, R V R (1981) 28 SASR 321 case will be vividly evaluated to compare the different judgements in order to generate ability to analyse it from the viewpoint of liberalism.

The judgement of Zelling J, Kings C.J and Jacobs J is vehement in this case to ascertain the ultimate verdict by the honourable court. The defendant had murdered her husband in the course of sleeping with a big axe. Based on her appeal of provocation, the judges did not leave that matter of consideration to the jury. The judges did this intentionally to recall the basic principle of homicide under the law of Australia. A murder due to momentary loss of self-control and ability of determination can be proved as a provocation under the law to diminish the level of retribution. The majority judgement in this case went in favour of the appellant whereas only one judgement went against her with sheer distinguishing factors between them. The appellant had managed to produce a number of evidences with important eyewitness like her daughter Denice. The information derived from Denice subsequently suggests that the killer person was brutal and inhuman to his children and wife. Besides constant beating, he used to intercourse with her daughters with force that suggests adequate causes for the appellant to bent upon killing her husband[1].

In this judgement, the notion of battered woman syndrome has been quoted to establish the state of provocation of the appellant. The witness of Denice and other children of the appellant have quenched the requirement of providing some proper accounts to prove the existence of utmost provocation that compels the appellant to kill him. The low self-control and traumatized condition of the appellant is the very evidence of provocation according to the modern criminal law of New South Wales[2]. The Crimes Act 1990 reveals that extreme provocation is a sort of self-defence from the constant oppression and brutal domination by the victim that substantially urges for reducing the level of penalty for murder.

The judge referred the case of Holmes v. Director of Public Prosecutions for establishing the context of provocation in the case of the appellant. The appellant had become rendered to temporary passion with an upsurge of anger and revenge that was beyond her capability to control. The Court of Criminal Appeal has the authorization to evaluate the worthiness of the provided evidence under the guidelines of the criminal laws to procure ease in the process of generating a verdict. The judge had suggested starting a new trial based on new information and investigation.

The principles of aid to the disadvantaged and the rule of criminal law are at stake and it is addressed by the honourable judge in the course of making a verdict in the case of the appellant based on existence of provocation. Denice termed her father as completely insane that is a viable point in this case to prove the violent and brutal nature of the victim that has compelled the appellant to kill him. The colloquial descriptions of the witnesses are helpful in this case to provide a vivid account of the unbearable rage of the victim. The evidence of Mrs. Kalemba revealed the inhuman tortures of the victim upon the appellant that provides a edge to the appellant in legal conflict through The Household Violence Act 1963[3].

In the case between Bullard vs. The Queen, Lord Tucker evaluates the aspect of provocation that can exist at the same time with a desire to murder. On the other hand, Holmes v. Director of Public Prosecutions case shows that the specific evidences can be verified by the court to provide ease to the juries to come up with a proper verdict on deciding between manslaughter and a murder. The section (23) of the Crimes Act 1990 ventilates that the juries can come up with not guilty in this case but a judge cannot influence the juries on this regard of decision-making. The section (304) of Criminal Code Act 1899 has suggested that any unlawful murder by the oppressed needs to be proved with relevant evidences for establishing the notion of provocation in order to decrease the punishment level[4]. The judge explained that the appellant can be taken as an accurate subject for compassion and mercy due to the past history of this case. 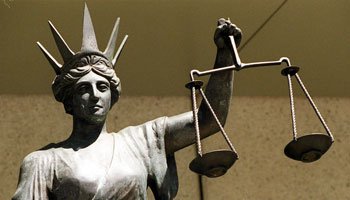 The judge vehemently expressed his concern to avoid correlating the motive of the murder by the appellant with the issues of provocation that is yet to be proved in front of the honourable jury members. A matter of homicide cannot be ever treated as an excusable matter as per the guidelines provided in the subsection (3)(c)(i) of the Criminal Codes Act 1889. The manslaughter is a difficult thing to prove and even after proving, the appellant must be penalized in order to practice lawful actions. In the case Greeen vs. the Queen, the judges and juries have ventilated verdict against the notion of provocation for the subjected matter of brutality that is present in the homicide.

Based on the cases like Parker vs. The Queen and Moffa vs. The Queen, the fragmented aspects of the evidences of provocation can be eradicated because of very uncertainty of the parallel viewpoints of murder. In some conversations between the prosecutors and the appellant, the demoralized conditions and violent gestures of the woman has ventilated that simply denies the chance of potential provocation from the husband. The judge has also raised the concern of ventilating the requirement of showing the loss of self-control through different inferences rather than producing immense witnesses and evidences. According to Jacobs J, this case does not have adequate potential to fit the aspect of provocation in front of the juries and thus, it requires further trail with new investigation results[5].

The article “The' Ordinary Person' In Provocation Law: Is The "Objective' Standard Objective?” deals with the matter of provocation on the different aspects of men and women in order to provide a solemn account of the liberal principles in the cases like R Vs R (1981). The exculpatory notion of terming a homicide as an act of reason under the provocative perspectives is been discussed in this article to establish the idea of partial defence with reference of Australian criminal laws that is pivotal in this case . The heinous activity of a monolithic person outside the guidelines of law cannot be justified with the aspect of provocation even with relevant evidence. The Model Criminal Code Officers Committee has ventilated the concern of eradicating the impact of provocation in homicide as a murder cannot be justified with anything that is reflected in the judgement of Jacobs J. The elusive context of ordinariness exists in the legal provision of Australia that is sympathetic to the criminals of murders[6]. The domino centric attitude of the juries are effective to shed light on the matters of domestic violence in comparison with the Australian criminal laws that can be analysed in the context of the case of R Vs R (1981)[7].

The article “A Provocation Defence For Battered Women Who Kill?” briefly emphasises on procuring a basic policy regarding provocation that can be used in the cases like R Vs R (1981) to help the appellant for producing legitimate evidences in support of her claim about the violent brutality of her husband. The absolute plea of battered women like the appellant is revealed through this article by advocating a compromise in the criminal offense laws of Australia. This journal also reveals the unarticulated provinces of the proposition of homicide that suggests a murder through provocation is inferior in blameworthiness to a pre-planned cold-minded murder. This article also formulates a legal prospect for the judges of the criminal court room report of Australia to take up the responsibility for implementing provocation provision for the battered and tortured women like the appellant that can reduce the level of punishment. The liberal principles of rule of law and aiding the disadvantages are vehemently relevant in this context of provocation in a murder case for providing support to the appellant for reducing the punishment. Based on the liberal issues, the cases of provocative murders can be gratified for helping the juries to get to a definite verdict that accounts both the severity of murder and existence of provocation[8].

Liberalism urges the right of equity for both the gender and beyond the barrier of cultural or ethnic discrimination. The liberal values can provide liberty and freedom to the civilians of a particular society. The central values of liberalism are freedom, rationalism, individualism, tolerance and justice that are profound characteristics of a liberal society. In the very case of R Vs R (1981), the liberal values of freedom, tolerance and justice are very much relevant in order to evaluate the criminal offense by the appellant and the possible verdict on this case[9].

In the judgment of three judges, the liberal value of tolerance and justice has often reflected for making abrupt decisions based on the provided facts and figures of this case.  The laws of provocation conjure the aspect of tolerance that the appellant executed with utmost level of composure. The massive outbreak of her calmness caused the murder of her husband. King C.J has opined about the term of tolerance that is a sheer sign of provocation that has compelled the appellant woman to kill her husband in sleep. The matter of justice has also been considered by the judges in the course of the trial for providing an accurate decision that can provide justice to both the victim and the accused. Jacobs J has mentioned the need to provide justice to the murdered person through the verdict of the juries. The facts of this case trigger the existence of freedom that is an identical liberal issue in this context to foster the level of provocation. The appellant and her children were brutally treated by her husband that had created a sense of subservience for the woman[10]. The subjugation in the family and the brutal torture on the children played a pivotal role in crafting provocation for the woman to make some activities for ensuring freedom for herself and her children. The judges had not mentioned the liberal issue of positive freedom in the course of evaluating the case to eradicate the controversial consequences. In order to establish the role of freedom behind provocation to murder a human, can face tremendous legal turbulence under the criminal laws. Thus the matter of freedom was evident in the case as the urge to get freedom from brutality and oppression had worked as a major driver for the appellant woman to kill her husband.

The Australian criminal laws and regulations generate a specific guideline for the cases of homicides but, the cases with prolific existence of provocation is dealt with different set of laws and liberal values. Efficient and legal following of the liberal issues can be the most fruitful process to derive apt verdict for the benefit of all the people related with this kind of cases. The matters of provocation need special attention to avoid partiality or vagueness in the legal verdicts for providing equality to everyone to obey the values of liberalism with sheer aptness.