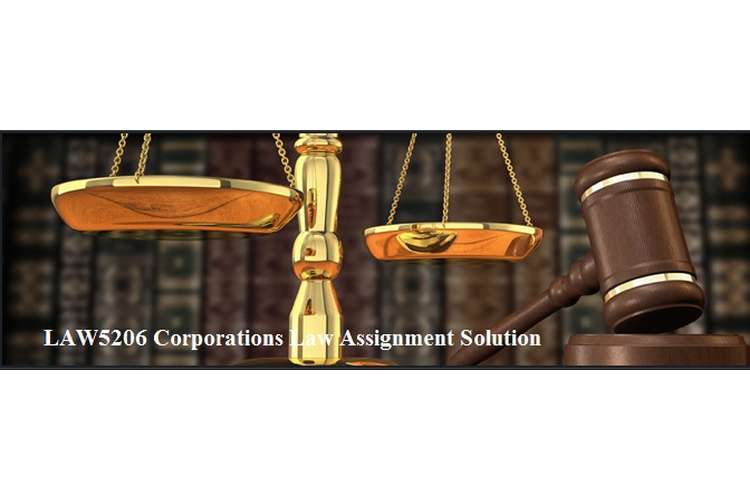 This LAW5206 Corporations Law Assignment Solution is focused on different type of undersection relevent of corporation law and its advantage and disadvantage.

The given circumstances give rise to few issues. That same are submitted herein under:

The above raised concerns can be analysed in the light of the provisions of the Corporation Act, 2001.

The role of the Directors in any company is very important. There are heavy duties and responsibilities that are allocated upon the Directors of the company. The main steps that can be undertaken by the directors in order to protect and fulfil their duties in regard to a company are, first, to seek the help of professional advisors; second, to keep them and other officers updated with the current scenario of the company; third, to allocate a necessary compliance and management programme and fourth, proper insurance coverage should be maintained. Thus, the role of a Director cannot in any circumstances be mitigated as the progress of any company depends upon the working of the Directors of the company. [Baxt, B, 2005]

The Directors are the part of a company which has its legal existence under the Corporation Act, 2001. There are several companies that prevail in Australia, such as, private company, public company, foreign companies etc, however, the role of a Director does not varies with the nature of the company. Rather the role and responsibilities are stagnant and must be furnished by Directors in every situation. The concepts of the importance of Directors are highlighted in Deputy Federal Commissioner of capital taxation v austin (1998).  [Lucy, J, 2006]

The Directors of the company are allocated with several responsibilities, such as, duty to act in the best interests of the company, duty to act in good faith, duty of care and diligence, duty to mitigate any conflict of interests, duty not to misuse the company information are the duties which is in compliance of all the other duties. These are the duties which are imposed upon the Directors and are owned towards, creditors, shareholders, fellow directors, employees etc. The importance of the duties was highlighted in NRMA v Geeson (2002). [PWC]

All essentials duties of a Director are submitted below:

Mainly the duty of care and diligence was for the first time formulated in AWA Ltd v Daniels & Ors (1992). The duty of care submits that it is the responsibility of the Directors that they must take heed to the affairs of the company. The duty of care and diligence was specifically obligated on the shoulders of the non-executive directors and was held in Daniels v Daniels (1979)  & Darvall v North Sydney Brick & Tile Co Ltd (No 2) (1977). In order to deal as to whether the care and diligence has been attributed by the Directors or not it is necessary to judge the actions of the Director in the light of what a normal reasonable man views. Along with this the position of the company and the directors are to be looked into in order to analyse whether the duty is properly furnished by the Directors or not. However, many a times the defaulting partners for the breach of section 180(1) of the Act is guarded by the application of business strategy rule. However, it is important to submit that the rule has its allocation only with respect to the duty of care and diligence. Section 180 (2) of the Act deals with business judgement rule. The director is relieved from the breach if he can prove that:

If all the above submissions are made than it can be said that the director is not breach of duty of acre and diligence and is protected by the framework of business judgement rule. The concept of business judgment was highlighted in Talbot v NRMA Ltd (2001).

Duty to prevent Insolvent Trading [Worreells, 2011]
One of the most important duties that are imposed upon a Director is to avoid insolvent trading. Section 588G of the Act deals with this duty and is established in Woodgate v Davis (2002). The duty submits that no trading must be incurred by the company when the company is not solvent or will become insolvent if trading will occur, trading includes raising liabilities on behalf of the company. A director is held for breach of section 588G when he was aware that the company is getting involved into trading which will make the company insolvent and does nothing to stop the same. However, a Director can be safeguarded from the breach of section 588G of the Act, if he is able to prove the defences availed in section 588H of the Act. These are:

Thus, all the directors are in breach of one or more of the duties.

All the Directors are in breach of duty of care and diligence and other duties and can rely on the business judgment rule and the defences only if they can prove that they acted in good faith and all reasonable care all catered by them before involving the duties. That they played with full honesty and diligence.

Conclusion
To conclude, it can be submitted that the Directors are the essential part of every company and thus should follow the obligations imposed upon them so as to avoid any consequences.

Letter of Advice in regard to options best suited under the external administration procedures under the Corporation Act, 2001.

As per the given facts submitted by you, the three shareholders and Directors of your company Stone Pty Ltd are Eric, France and George (your good self). The company operated by you deals in supply of food products to cafes around Toowoomba. It was submitted at your end that the company is facing difficulty in its financial position because several large customers of your company are not paying the invoices on time. This has resulted in having not funds to pay the bills, particularly rent. The owner of the warehouse has also warned you that if the rent is not paid on time he will evict you from the premises. Also, as submitted by you, the employees are taking industrial action in an attempt to receive a pay increase. This strike stops deliveries from the warehouse for two days, with several customers cancelling their supply contracts with the company.  Further, the company’s bank, Eastbank Ltd, threatens to appoint a receiver over the company if the monthly interest is not paid within two weeks. From all the above stated facts it can be concluded that the company is not in sound financial position, thus, there are several external administration procedures that can be availed by you for Stone Pty Ltd. All the procedures are dealt one by one and a brief analysis is drawn with respect to its pros and cons,

Voluntary Administration– it is submitted that it is a process which is formulated by the Corporation Act, 2001. Part 5.3A of the Act deals with administration and its object is engraved under section 435A of the Act. The process of administration is very short @ one month. [Marshall R]

Process of voluntary administration [Herat A, 2013]
As soon as an administrator is appointed, he takes the control over the affairs of the company. He is responsible for the decisions in regard to the company. The administrator must conduct a creditors meeting within 5 days of his appointment. After 28 days, another meeting of the creditors is called under which a report is submitted by the administrator submitting that whether a deed of company arrangement or liquidation is preferred.

Advantages of administration [Herat A, 2013]

Liquidation - There are two types of liquidation that is prevalent in the corporation Act 2001. These are: [Marshall R]

If you want to liquidate and cease the company and does not want its control retained then this option can be availed.

The liquidator can submit the report on the conduct on the actions of the directors. If the directors are found to be in breach of insolvent trading then they can be disqualified;

Thus,
After understanding all the three options, it is suggested and recommended that the best option that can be availed by your company is opt for administration, rather than liquidation or receivership. This is so because by appointing an appointer the company can retain its financial position back and the company remain alive. By option receivership or liquidation there is cessation of the company. Hence, it is advised that the company must be voluntarily administered.