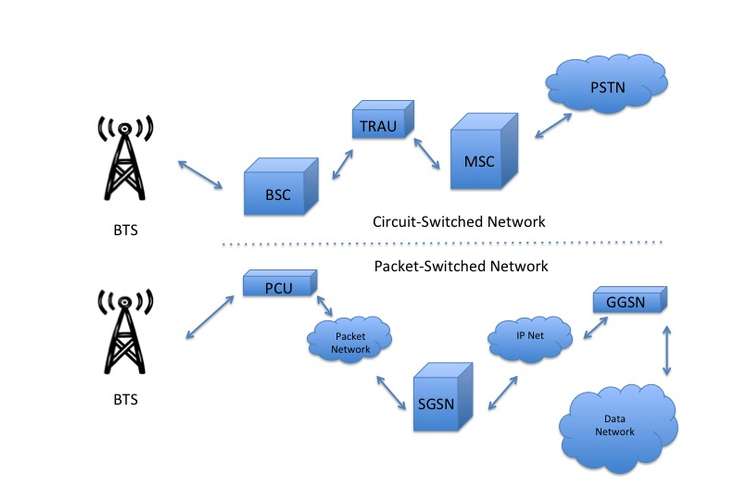 The following packets are transmitted in a SCTP session. The marked packet is lost. What are the complete contents of the packet including the SACK chunk from Node 2? 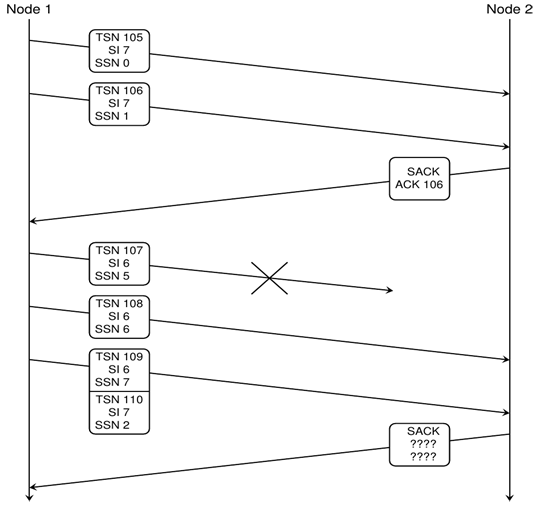 Solution:The SCTP uses the TCP protocol so in this transmission the TSN 107 packet is lost during the transmission. So the return Sack will contain the following information
1. ACK 110

A) Is a table-driven routing protocol suitable for high mobility scenarios? Justify your answer with reasons.

Solution:The table driven routing is already used in the traditional internetworking model. And it is working perfectly fine. But the main problem comes it with the Mobility solution. As the latency introduces in the mobility network due to the presence of the wireless medium. Now the table driven routing work perfectly on the fixed installed system since now. The problem arises with the wireless medium. We can’t control the number of theuser present in one part of the wireless medium zone. So it increases the overhead on the router. And the router is designed according to the specified load it can handle.

So the traditionally based routing will become ineffective. And the performance of the network will go down significantly. As the number of usersis growing everyday on the network. And the high power router installation is not cost effective. So the in order to deal with this situation. The routing mechanisms have to be changed from the table driven routing process to other. The one is proactive routing in which the prediction mechanism is used to route the packet in the network. The other type of mechanism may include the offloading the routing process on the mobile device using some enhanced routing mechanism protocol.

B) Consider the topology shown below. Simulate the DSR protocol to establish a path from node 1 to node 10. Find the paths found and the ratio of the number of Route Request packets sent out in thenetwork. 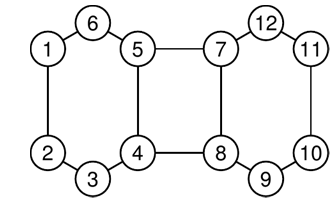 As we know that the Dynamic Source Routing (DSR) protocol is based on the temporary processing of the route no keeping any information for the future use. It is used for the Multi-Hope Wireless Networks. It basically works in the similar ways as the traditional routing does. Only the differences are that the routing searching always done only if the destination node is unknown.

Now the simulation of the given network topology diagram is given below step by step.

1. At first, the Node 1 sends the Route Discovery packet with aunique ID in it and the source and destination address 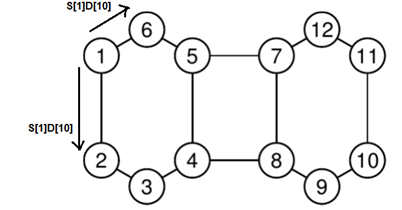 2. After receiving the packet at the node 2 and node 6 they again forward it to the adjacent node, But with their address in it for the reverse route for discovery. 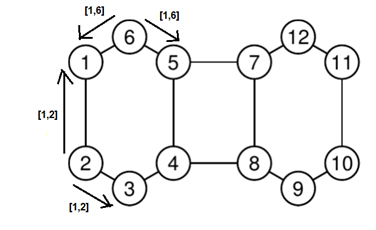 3. After sending the packet from node 2 and 6. The node 1 regards the same request as it is generated from this node. And this request is received by the node 5 and 4 depending on the arrival of time one packet will be discarded on the node 4 for node 3 and 5. We have chosen one scenario. 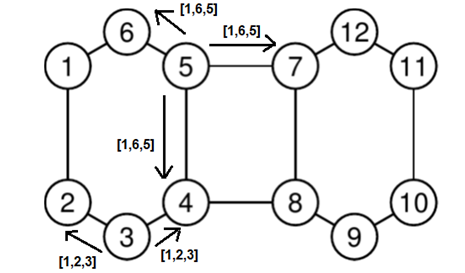 4. After receiving the packet at 7 and 4 nodes they again forward it to the node their adjacent node where node 3 and 5 discard the same request. 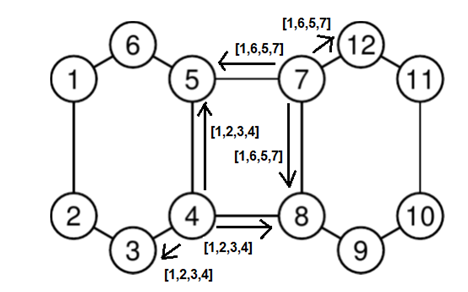 5. Now after receiving the packet at nodes 8 and 12 then they retransmit to their node. 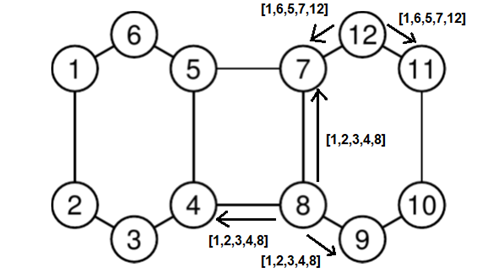 6. Now comes the final nodes 9 and 11. They receive the request and forward it to the neighboring node. And this time the node actually reaches the destination. 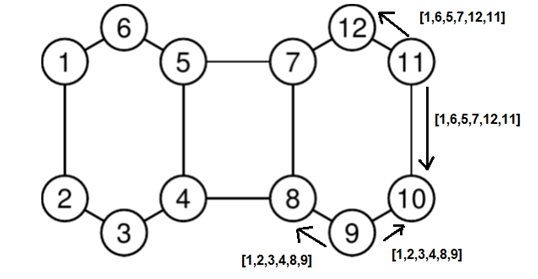 7. After receiving the packet the destination node 10 transmits the route from the node 1 to 10 from choosing either of the received packets first. We have chosen the path from 1,6,5,7,12,11. 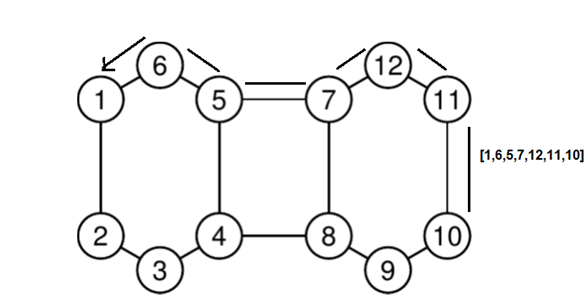 There will be multiple paths depending on the first request arrived at the neighboring nodes. Basically,there will be three paths may exist and they are given below.

But only the first two paths will be discovered due to the collision the other paths are not available. So the ratio of path the total number of request sent is given below

So the ratio will be 1:13 for the given route discovery in the given network.

A) The Ad Hoc network shown below (including node Q) is currently operating. The network is running the AODV routing protocol. Show the steps required to route a packet from node N to node I. In particular, what state is maintained at each node in the network.

B) What changes occur to the route, and how are these determined if node Q drops out of the network? 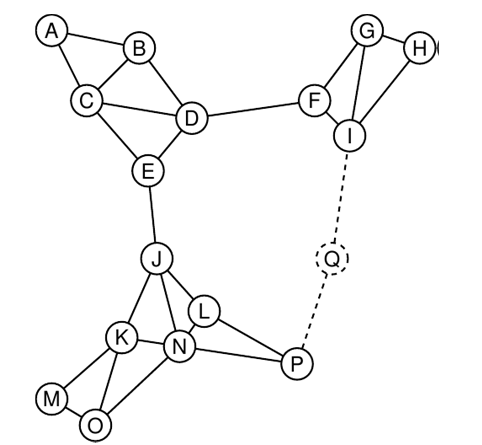 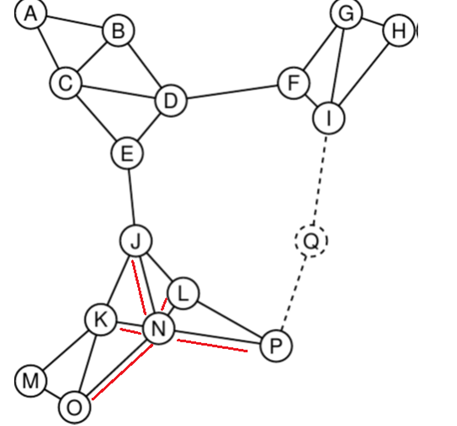 2. Now the nodes J,K,L,O, and P receives the request and put the reverse route entry in the routing table.
dest=N, nexthop=N, hopcount=1
3. Now all the nodes which receive the packet not have the route towards the destination node so they create another request and sent it to the neighboring nodes. But this time some packet may collide due to the request for the same destination. 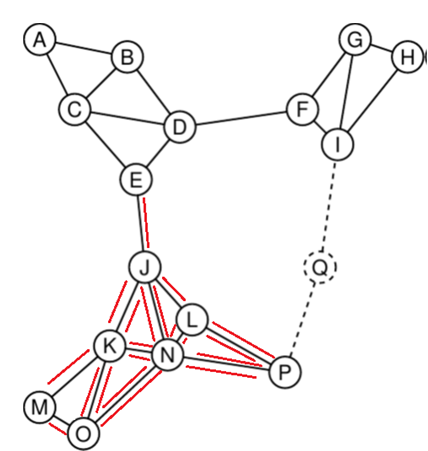 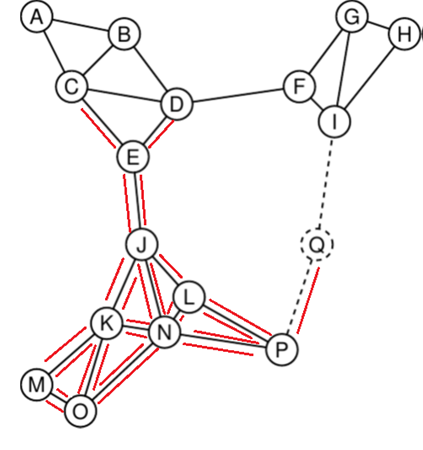 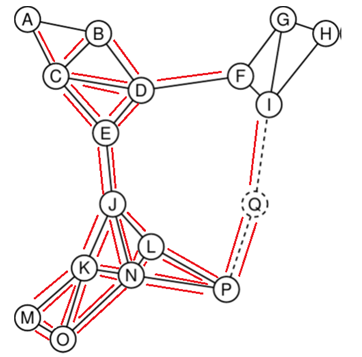 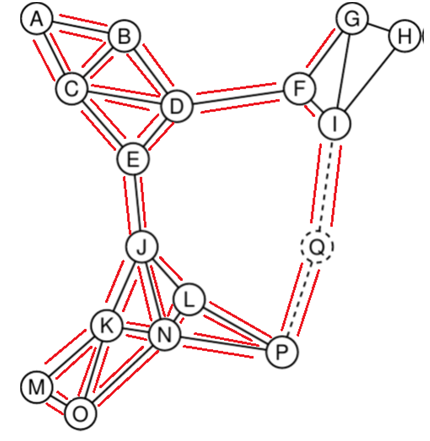 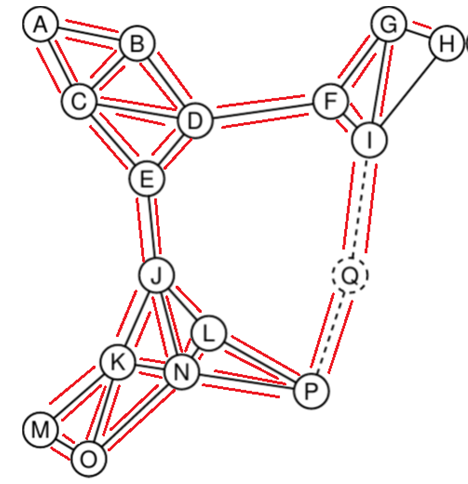 12. The information which are updated on the H tables are for the reverse route is given below
dest=N, nexthop=G, hopcount=6
13. The traveling of the broadcast packet now reached to all the nodes in the network and it will store information of path N. and the traverse is given below. 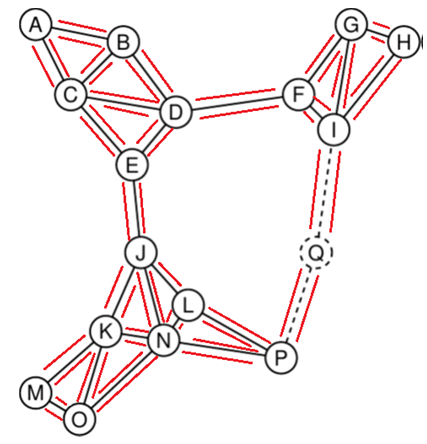 B. Solution:The changes that can occur if the node Q goes out of the communicating network. The different path and information are stored in the N nodes for the same destination. And the protocol uses the timeout for the hello packet which is comes from the neighboring nodes. If the timeout expires the route will not be valid anymore for the Travers. Now the Node N will use the least number of hope count route from its routing table. 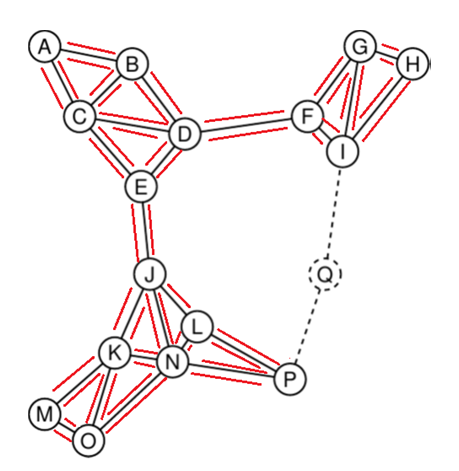 Now the path which will be used is from the J,E,D,F. Because it contains the least number of hop counts. And to avoid latency in the network.

Consider the scenario wherein a mobile host (MH) is communicating with a fixed host (FH) through Mobility Support Router (MSR-1) using the Indirect TCP (I-TCP) protocol. The MSR sends to the MH the packets P1, P2, P3, P4 and P5 in that order. Packet P3 is dropped but packet P4 reaches the MH causing it to generate the first duplicate acknowledgement (DUPACK). Before this DUPACK packet arrives at the MSR it has already sent out packet P5. Write down the sequence of steps that will be performed by the MSR and MH to bring the system to a consistent state.

The MH now moves from MSR-1 to another cell (MSR-2). Detail the sequence of step required to move the connection to the new MSR.

Solution:Indirect TCP connection works similarly to the original one but the only difference is that no direct TCP connection is established between the MH and the FH. Instead, two separate connections are created one for the MH host and the other one for the FH host.Now it is basically used in the mobile communication to overcome the issue of the wireless medium. In order to bring the system to a consistent rate the MSR and MH have to use the Snoop protocol and the steps that are taken in the MSR are a follows.

Now in order to move the MH from the MSR-1 to another cell (MSR-2), the following steps will take place

The whole process is the called the I-TCP Handoff and during this transmission, no data is lost. 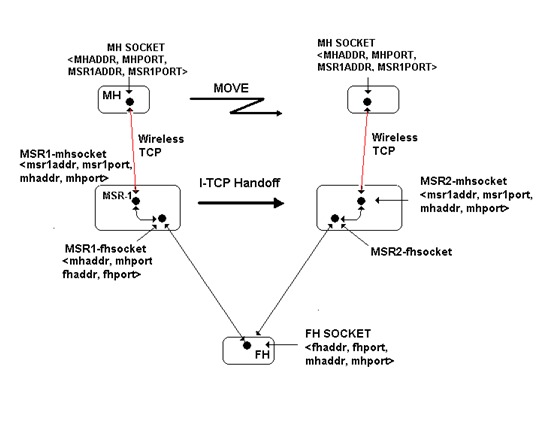 A mobile network is built with a cluster size of 12. Draw an example cluster arrangement below centered on cell A.

Traffic in cell A increases such that the cell must be segmented using cell sectoring. It is decided to use 6 sectors in the cell. Draw the additional sectors and relabel the cluster such that frequency reuse distances are not violated.

Solution:The answer to both questions is given below.
1. The cluster of the size 12 is configured given in the diagram. 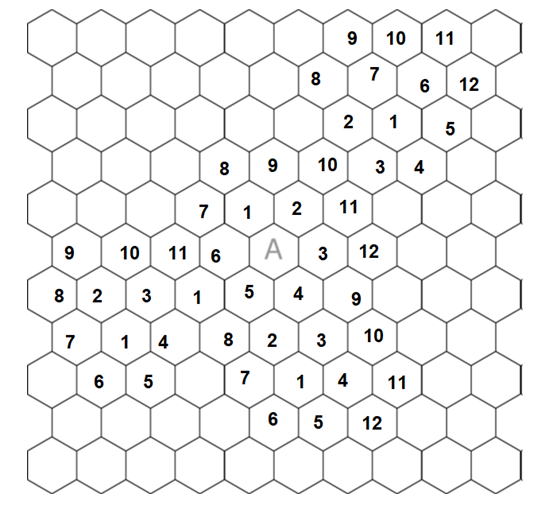 2. The sectoring of the network cell is given below 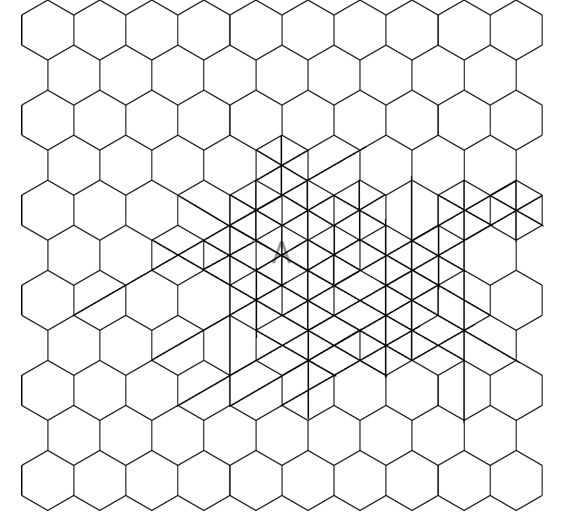 A voice call was initiated in cell A. It is currently in progress in cell B, and is continuing to use the channels from cell A. The mobile host moves so that cell C is now the better base station. Cell C currently has no free channels. Describe in detail under what circumstances the call can continue in cell C, and when the call will be dropped.

What reasonable steps could be performed to avoid dropping such calls in the future?

Solution:Call admission control is the most important part of the wireless network. There are various handoff priority-based CAC schemes that are been used in the communication system. The base station in the cell is better but the problem is the no channel is free to continue the call. If this happens in general circumstances the call will be dropped normally.In order to prevent the dropping of call the cell, the system uses the guard channel scheme. The main idea of this scheme is to reserve some backup channel which is only used when this type of situation arises. Now the user will able to continue its call connectivity and also the C is the base station. And the system will provide the reserved channel to continue the call without disconnecting. And this channel will be set to reverse. And these channels are used until all the reserve channel will be exhaust. This type of situation rarely arises and this only happens in the urban areas where the number of usersis very large and in order to continue the QoS this channel are used.

Now in order to avoid this type of situation there, certain types have to be taken and some of them are as follows.