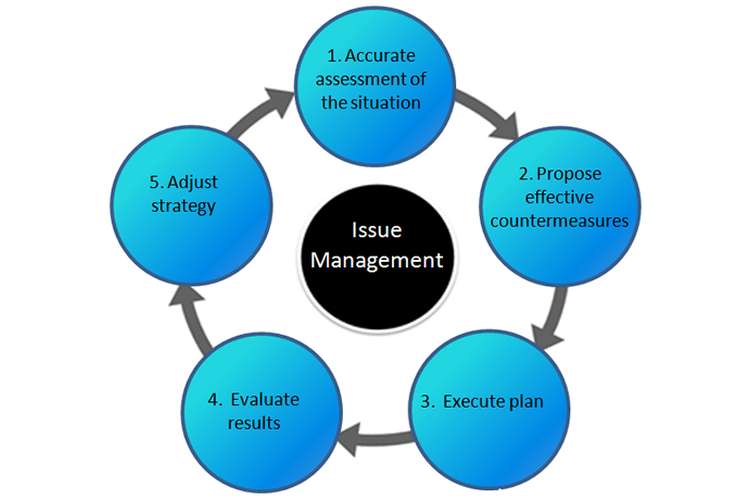 In this assignment, an issue management plan has been developed. The issue selected for the assignment is “Manchester Suicide Bombing at Ariana Grande Concert killing more than 22.” Company JW Marriott has been selected as case study.  It has been found that this incident of bombing has increased the security concern of visitors in UK. Based on this issue, a management plan has been developed for the company. It includes steps such as monitoring, identification, prioritization, analysis, strategic decision, implementation and evaluation.

On 24th May, 2017 an incident of suicide bombing took place at Ariana Grande Concert of Manchester, which killed 22 people. The name of the suicide bomber is Salman Abedi. It has been observed that this vicious attack has created huge social and political turbulence in UK (Riti et al.,2017). It has affected the British election as well. The tourism industry of UK is most affected by it. Tourists have been more concerned about their security while travelling to various destinations of UK (Riti et al.,2017).   In addition to that, this bombing attack has affected JW Marriott and all other tourism companies economically as well. Due to this attack, the tourist visit rate in UK, has been decreased by 50% (Morakabati & Beavis, 2017).

From the media report of Daily Telegraph, it has been found that the family of the bomber lived in the Fallowfield area of south Manchester for at least 10 years (Almohammad & Speckhard, 2017). It has been mentioned in this report that it is the third most populated area in UK, which is considered as “sound and safe.” This attack made local people “shocked” and “surprised” (Berezina et al.,2017). After this attack, people and tourists are showing concern about their security in social media like Facebook and Twitter. It gives rise to an anti-Islam trend in UK, which is affecting the tourism business of JW Marriott significantly (Almohammad & Speckhard, 2017).

After assessing the present business environment of UK tourism industry, it has been found that, the element of security has become the most important one. It has been assessed that for the last few years getting Visa to travel in UK has become easier (Brondoni, 2016). People from all over the world can easily get Visa to travel in UK. They consider UK as a safe and secure place to travel as well. Government of UK has also taken the security of visitors as granted (Berezina et al.,2017).  It made UK, a vulnerable area for terrorist attack. As a result, incidents like “Suicide Bombing at Ariana Grande” took place. After the incident, tourists have become more concern about their security while travelling in UK. They are getting widespread support from tourists all over the world (Ryan, 2016).  Hence, hotels like JW Marriott are increasing their investments to enhance security. Without proper security measures the life cycle of any type of tourism package will be reduced (Brondoni, 2016).

It has been assessed the increased concern to tourists regarding security will have far-reaching impact on tourism industry of UK. George & Swart (2015) stated that, in future people will like to prefer those places where security measures are quite high. They will prefer those hotels Tools such as fire extinguishers; security cameras and metal detectors will become necessary for all hotels in UK. In addition to that, people have to go through various checking before they get Visa for travel (Hardy, 2015). Hence, the tourist rate will be decreased. It means profit and reputation of tourism companies such as JW Marriott will be at stake due to the increasing security issue (Hua & Yang, 2017). In order to get sustainable position in the highly competitive tourism market of UK, the company has to implement various new strategies such as increasing the number of security cameras, metal detectors and bomb detectors, increasing the number fire extinguishers and surveillance dogs (Jokar et al.,2016). The company also has to include various training programs to deal with situation of crisis. It will increase the cost for the company. It will reduce the profit margin of the company as well.  The increasing concern about security will reduce “the freedom of movement” for tourists. Hence, it has to be considered as an immediate threat.

The strategic response of the company will be “to enhance the security measures for customers.” They will send a message for the UK government and the tourists, which is “security first.” The target groups of the company are UK government and the tourists coming to visit the country. Increasing strategic measures is the only strategic option available for the company. Silke and Schmidt-Petersen (2017) stated that both financial resources and human resources are required to enhance the security measures of the company. The management of the company needs to implemented security measures like metal detectors, bomb detectors, and security camera and fire extinguishers (Stojmenovic et al.,2016). Proper communication strategy needs to be developed within employees to ensure security (Silke and Schmidt-Petersen, 2017). For example, a walkie-talkie will be provided to every employee to maintain communication. Digital media can also be used to maintain communication. 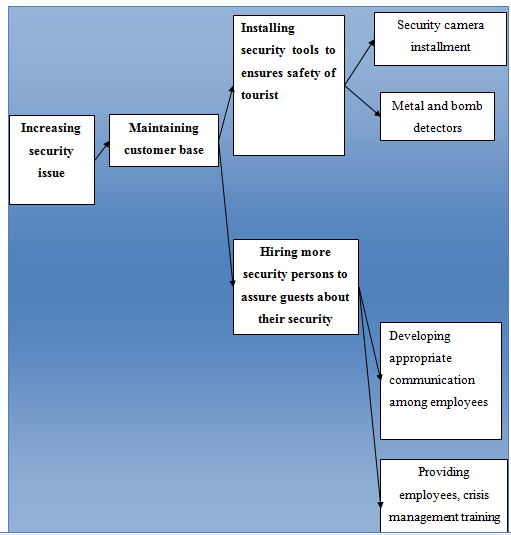 The incident of “Manchester Suicide Bombing at Ariana Grande” has given rise to concern related with ethical issue security among visitors. Many guests have canceled their trip to UK, after this attack. Due to this reason, occupancy rate of hotels like JW Marriot has become half of normal.

1. To maintain customer base by increasing their safety and security

1. Installing security tools to ensure safety of tourist of customers

2. Hiring more security persons to assure guests about their security

1. Including security cameras at all corners of the hotel

2. Increasing the number of metal detectors and bomb detectors

3. Increasing the number of surveillance dogs

4. Increasing the number of fire extinguishers

The company has developed various security policies and programs to ensure safety and security of visitors and employees. They are discussed below:

Security policies for visitors and employees

There is various security programs have been implemented by the company. They are discussed below:

In order to discuss about the policies and programs implemented by the company, a tactics flowing table has been used. The table has been provided below:

Considering the current situations and the anarchy that has followed it is of extreme importance for the administration of JW Marriot to implement the different security measures in the organization. There are a number of measures that can be adopted by the organization. This includes installing new and more advanced security cameras. A proper surveillance room with proper monitoring system should be implemented in the organizations. The organization JW Marriot has planned to develop a proper communication system in the organization.  They strongly feel that a proper and effective communication systems should be implemented as it will help the employees to warn each other about any suspicious ongoing cited by  them. The adoption and the implementation of the different security cameras as extinguishers have proved to be extremely useful for enhancing the overall security of the organization. However, usage  of  the different metal detectors have not proved to be effective. Owing to the advancement of technologies, there are a number of bombs or other explosives that cannot be detected by the different metal detectors. So in many cases, they prove to be a complete failure to detect the different explosives or the sleeper cells that are entering their hotels.

However, Almohammad& Speckhard(2017) had emphasized much on the usage or rather the monitoring    by the sniffer dogs. The effectiveness of these dogs is quite appreciable and they can detect the presence of the different explosives from a good geographical distance. Moreover, in the words of Berezina et al.(2017), there is a number of instances that have pointed out towards the failure of the application of the security cameras and   the metallic detectors in enhancing the overall security of the organization. So only relying on these mechanisms for ensuring the security of the organization will never be a much realistic idea for JW Marriot. It has decided by the authority that the sniffer dogs will now also check the luggage’s   of the visitors as well as the individuals as this will help them to provide more secure services to the customers. Considering the current trends, the organizations have also decided to opt to cloud storage. Previously the organizations have the capability of storing the video footages of the past 7 days. But now they have decided to store these videos for a span of 6 months. This step is expected to be extremely impactful, as it will help them too restrict the different future terrorists’ activities as well. The hotel has already started implementing the other security strategies in accordance with the different government policies for assuring   the safety and security of their premises.

The above project concentrates on the different effects that have been monitored owing to the suicide bombing at the Ariana, Manchester on the 24th of May, 2017. The project has provided a detailed background of the case study along with the different security measures that can be adopted for preventing such incidents in future. With the help of SWOT analysis has pointed out towards the strength as well as the weaknesses of such incidents along with the impacts of these incidents in the overall customer base of JW Marriot. A number of security measures such as security cameras and fire extinguishers along with other bomb detectors are already implemented in the organization to ensure full proof security. However, the organization needs to implement more appropriate security systems. The organization already has a proper kennel of sniffer dogs who are effective. Previously the organization had the ability of storing the video footages for a maximum of 1 month. But now considering the current situations they have decided to store the footage of the past 6 months. This has been estimated as one of the effective steps towards ensuring the safety and security that can be taken by J W Marriott in the current times this will helps them greatly to fight back the claws of terrorism that   has been in existence in the current times.

1. Almohammad, A. H., &Speckhard, A. (2017). The Operational Ranks and Roles of Female ISIS Operatives: From Assassins and Morality Police to Spies and Suicide Bombers. International Center for the Study of Violent Extremism, 23.