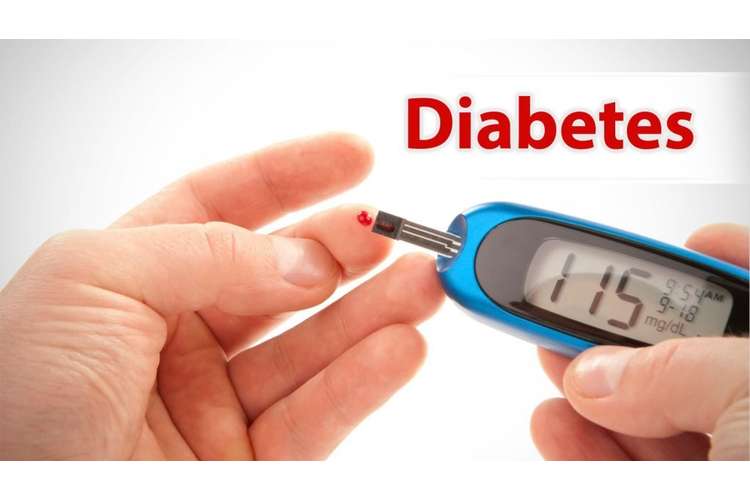 Alex is an Australian woman who belongs to the Aboriginal community in Australia. She is a 45 year old woman who reported symptoms such as GP with fatigue, blurred vision, tingling in her feet etc. The most significant factors were that she felt very thirsty for past few days and had been going to urinate frequently. Her diagnostic test reports disclosed that she had a high blood glucose reading and glucose level in her urine. She was trapped by type 2 diabetes.

Australia is facing an epidemic situation because the number of diabetes patients is unbelievable and they are still increasing. Diabetes is a chronic disease in which the blood pressure of a person goes extremely high and this is because of two reasons. Either the body is not able to produce enough amount of insulin or even if it produces, the cells of the body do not respond to the insulin produced. (Diabetes, 2017)

There are 2 types of diabetes:

Type 1 Diabetes:Here the insulin producing cells which are present in the pancreas in the body suffer from autoimmune destruction.

Type 2 Diabetes:In this case, the body does not produce insulin or the body tissues do not respond to the insulin produced in the body. (Diabetes and its impact on Australia, 2012)

Incidence is the occurrence rate at which any disease occurs frequently. In case of type 2 diabetes in the indigenous Australians, the incidence rate in males is 1.5 times higher than in females (83 in comparison with 56 in every 100,000 respectively) as shown in the graph. 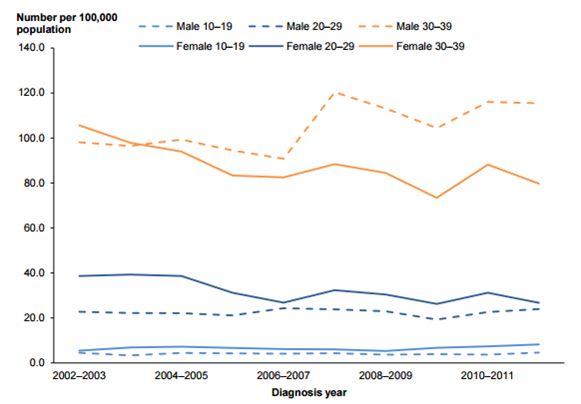 Fig: Incidence of derived type 2 diabetes by year of diagnosis, sex and age among Aboriginal and Torres Strait Islander people in Australia. The graph shows that variations in the number of people affected by the type 2 diabetes in the time period between 2002 to 2011. There are separate plots for male and female of different age groups marked with different colors and dotted or straight lines. The incidence is more on the people who belong to the age group of 30-39 among the population of Aboriginal and Torres Strait Islander people.

Prevalence is the proportion of population that is suffering from diabetes at a specific point of time. Diabetes is highly prevalent among the Aboriginal and Torres Strait Islander people in Australia that is approximately 881,000 people are suffering from this disease who are 10 years and above age.  These 881,000 constitutes 4.5 % of Australia’s total indigenous population. The below shows the statistics of prevalence of type 2 diabetes: 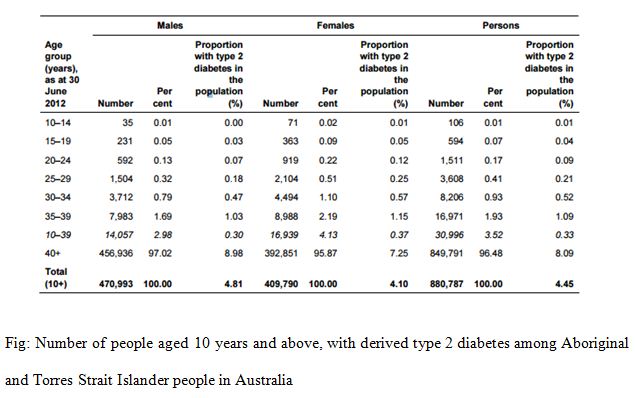 The mortality rate of type 2 diabetes sufferers among the Aboriginal and Torres Strait Islander people is quite high in Australia. According to statistics and information obtained from surveys, this disease causes approximately 10% (in indigenous group) of all the total deaths in Australia. This 10% account for 15, 700 deaths of indigenous Australians according to AIHW National Mortality Database in the year 2014. 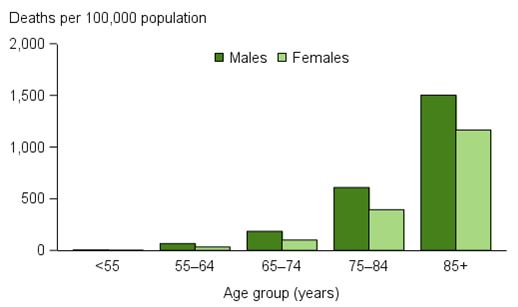 Fig: Deaths due to diabetes (underlying or associated cause) by age and sex (Mortality Rates, 2017) among Aboriginal and Torres Strait Islander people in Australia. The graph shows the number of deaths in a sample of 100,000 population in between the age group of 55 to 85. The deaths after the age of 85 in the Aboriginal and Torres Islander people in Australia is far more as compared to the other age groups.

According to the graph, the indigenous people who are aged above 75 years are majorly dying from type 2 diabetes and in Australia. When compared between men and women, female sufferers are more but men are more likely to reach death levels because of type 2 diabetes.

a. Improper secretion of insulin by the body

b. Increased resistance to insulin that is already produced in the body.

Impaired Insulin Secretion by the Body

This factor is usually progressive in nature and the process of progression includes glucose toxicity and lipo – toxicity. When the disease in untreated, the glucose toxicity and lipo – toxicity causes a decline in pancreatic β cell mass; this was known after animal experiments. When pancreatic β cell does not function in a proper manner then it highly affects the control of blood glucose in the long term. In the early stages when the patients show an increment in postprandial blood glucose due to increased resistance as well as impaired secretion of insulin then pancreatic β cell mass keeps on decreasing which eventually results into a permanent inflation of blood glucose. (Zhang et al, 2001)

It is a condition in which the insulin produced in the body does not work sufficiently in proportional to the concentration of blood. The organs that are majorly affected by this disease are liver and muscles. The resistance to insulin develops and affects before the disease onset. The resistance to insulin in concerned with genetic factors as well as the environmental factors that includes free fatty acids, hyperglycemia, inflammatory mechanism etc. (Shoelson et al, 2006) The genetic factors include insulin receptor, insulin receptor substrate (IRS) – 1gene polymorphisms that affect the insulin signals and the polymorphisms of thrifty genes which are β3adrenergic receptor gene, uncoupling protein gene etc. To improve the increased resistance, adiponectin (adipokines that is adipocyte derived bioactive substance) is used. There are varieties of clinical tests that are helpful to assess the extent of resistance to insulin. Some of the tests are insulin sensitivity test, minimal model analysis, homeostasis model assessment for insulin resistance (HOMA – IR), steady state plasma glucose (SSPG) etc. Nowadays, the Mastuda index is considered as a better procedure to calculate the insulin resistance in muscles and liver. (Pathophysiology of type 2 diabetes, 2010)

Symptomatology is explained as the collective set of all the characteristics or symptoms that are observed in any person during any medical condition. In many cases when a person is suffering from type 2 diabetes, he may not exhibit any symptoms. The major reason behind this is that type 2 diabetes is detected at a later age as a result of the routine medical check – ups and screening tests. This disease has a lot of complications because it is diagnosed at a later stage so disease has already affected the body. Some of the symptoms in type 2 diabetes are:

1. When a person urinates frequently as compared to the usual number he urinates. In case of Alex, she has also displayed this symptom.

2. When the vision of the person starts getting blurred and this symptom is also observed in Alex.

3. When the genital areas of a person are affected by an infection or the skin becomes itchy such as thrush.

4. One major symptom is that the person feels extremely thirsty even just after drinking water as observed in Alex’s case.

5. Feeling tired and pain in joints is also another major symptom of diabetes.

7. When a person gains weight in a very less time then he must check for diabetes. (Symptoms of Diabetes, 2015)

It is immensely important to diagnose diabetes at an early stage because it becomes more severe with time and it affects the body and thus the immune system becomes weak. If it is diagnosed at an early stage, then it can be treated and its effect can be minimized or controlled. The diagnostic procedures for type 2 diabetes are explained below:

In this test, a blood sample is taken from the vein of the person’s body and then the sample is sent to a pathology lab. There can be three types of test in this case:

1. A fasting sugar test (Glucose test) – In this test, the person must do fasting for minimum of eight hours. For instance drinking and eating overnight,

2. A random glucose test that can be done any time in 24 hours.

3. An oral glucose tolerance test (OGTT) – here also the person needs to do fasting. The person has to drink a sugary drink and then blood sample is taken after 1 hour and then again after 2 hours. The person must eat and drink in sufficient amount that is 150 grams per day of carbohydrates or starchy foods for continuously 3 days and then he is eligible for glucose tolerance test. (Diabetes Diagnostic Procedures, 2016)

This is also a blood test which is commonly known as the HbA1c test. In this test also, blood sample is taken from the veins and then the sample is sent to the pathology labs. This test determines the percentage of haemoglobin molecules present in the blood which have a sugar molecule associated to them (Haemoglobin molecules are those molecules that makes the RBC-red blood cells red). (Diabetes Diagnostic Procedures, 2016)

There condition at which diabetes is diagnosed and they are:

1. The fasting sugar level after is greater than 7 mmol/L that is taken on two separate occasions.

2. When the glucose tolerance test (OGTT) is greater than 11 mmol/L that are taken two hours after having the sugary drink and on two distinct occasions.

3. The level of HbA1c (glycated haemoglobin) is greater than 6.5% that is taken on two distinct occasions.(Selvin et al, 2004)

NDSS is an initiative of government of Australia to provide help and support to the diabetic patients. It offers numerous services like it provides products such as insulin pump consumables (IPCs) and other equipments for testing like syringes, needles, urine test strips and blood glucose test strips which can be obtained from NDSS access points or the community pharmacies. Moreover, the patients with type 2 diabetes can obtain subsidized test strip for first six months. NDSS also educate people about diabetes and its causes cures, symptoms and self care management. (NDSS Services, 2015)

Management and Care of Diabetes Type 2

The medication should be decided by the doctor because it is dependent on blood sugar level and other health factors and the medication is completely different for every patient as per his medical history. Some of the medicines for diabetes type 2 are:

Self-Care and Monitoring of Type 2 Complications

Self care includes that patient must go for checkup regularly, complete medication, keep his diet maintained and have healthy and balanced eating habits, avoiding stress and anxiety etc. In case of monitoring, a person is not required to do much self monitoring because even if he monitors nothing should be done without doctor’s consult. Some patients prefer to self monitor their blood glucose level but according to statistics there are no beneficial and evident results. (Funnell and Anderson, 2004)

Diet and exercise are two important factors to minimize the complications of diabetes. The diet plan for one day:

Exercise has a lot of advantages but the most important one is that it maintains blood sugar level. Suitable exercises are:

Empowering individuals regarding their health conditions is of significant importance. According to World Health Organization (WHO), the patients must be provided knowledge and ability to count carbohydrate, adjust their lifestyle accordingly and monitor the insulin level and to motivate them to maintain their regular activities.

The sources for obtaining education about the type 2 diabetes in Australia are DESMOND (Diabetes Education and Self Management for Ongoing and Newly Diagnosed) education program, Stepping Forward which was a one day educational event, EXPOsing Diabetes, Got Suga etc. (Educational programs, 2017)

Symptoms of diabetes (2015) (online) available at https://www.diabetesaustralia.com.au/type-2-diabetes last accessed on 18/3/2017

Food choices for people with diabetes (2012) (online) available at http://diabetesnsw.com.au/wp-content/uploads/2014/12/DA-15-Food-choices-for-people-with-diabetes.pdf last accessed on 19/3/2017

Frequency of testing (2010) (online) available at https://www.nps.org.au/australian-prescriber/articles/self-monitoring-of-blood-glucose-in-type-2-diabetes last accessed on 19/3/2017