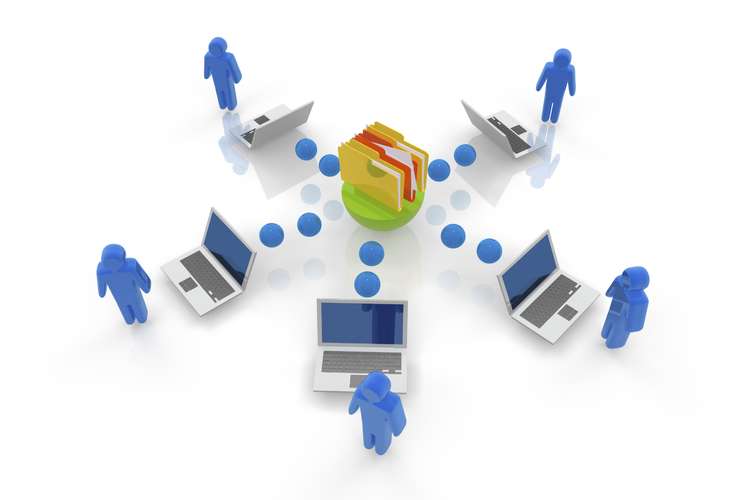 The aim of this report is to make Mashup Software, which will get the location of the clinics located in the various regions of the country. These Clinics are owned by the same organization. This is achieved in three phases:

1.Use of petl module to extract and load data from csv files to table and to convert XML file into the table which is later combined. Also, regex is used to clean the missing data from the CSV file.

2.In next step a RESTful WS is designed which is based on the Python Bottle Framework, it returns data in JSON format

3.In the end, a Mashup is developed which gives the GUI to the user, where a user could enter postcode of the known clinic state an get to know the location of the clinic.

To achieve this, IDE PyCharm is used and the code is developed using Python, HTML, CSS, and JS.

The data given by the company has missing values, which in turn will lead to the inconsistent results. Also, the data given is in different formats which are merged later into one.To solve this issue

Files that needed to be analysed for this project:

1.Clinics.csv:This is a Comma Separated value file. In it, fictional locations of the clinics are given which are owned by the company in the different Suburbs. Figure 1 shows the data in the clinics.csv file. 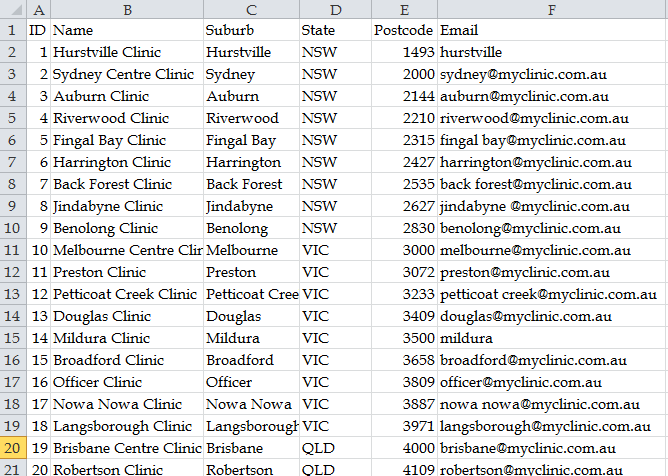 2.Location.xml: another file is an XML file in which contains Longitude and Latitude of Clinics in XML file. As it is independent of the platform so, no need to embed it with any other format. The below figure shows the XML data in the browser. 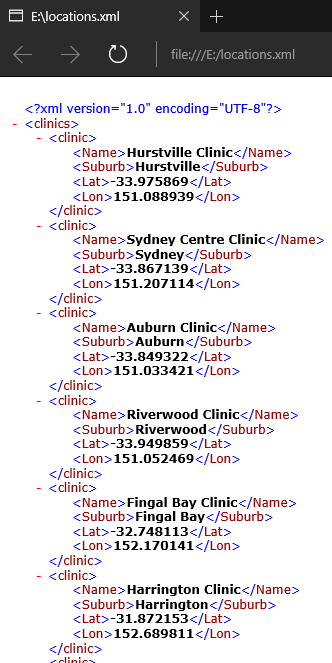 Figure 3: petl framework that converts the XML to CSV

As said earlier, the clinic data that is given in the form of CSV file (Comma-Delimited Values) have missing values. The Email Values are missing which have to clean before the Merging process. To make those Emails understandable Regular Expression is used, in Python Regex module is used which in turn complete the data. The figure below shows the missing data (displayed by Red arrows). 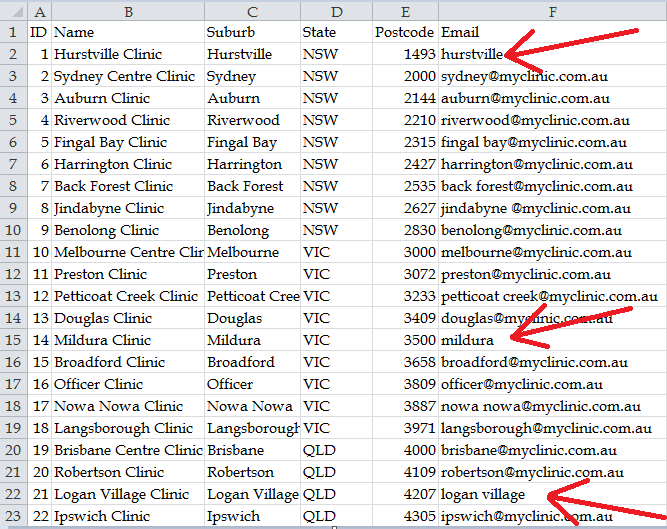 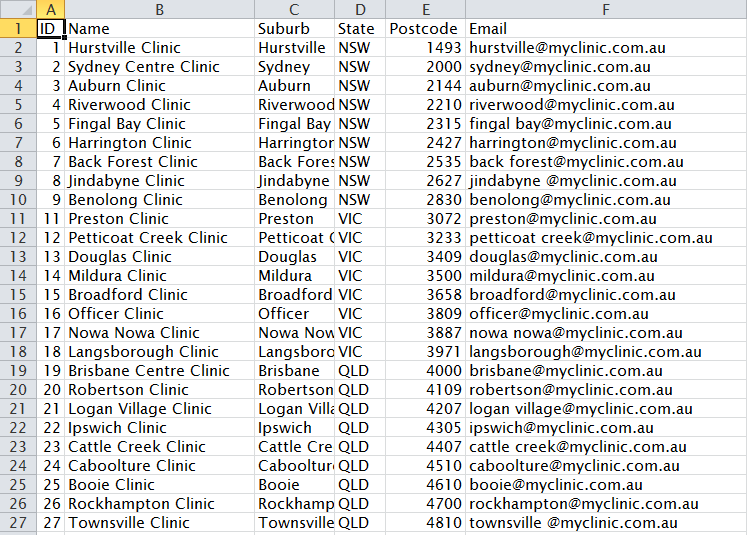 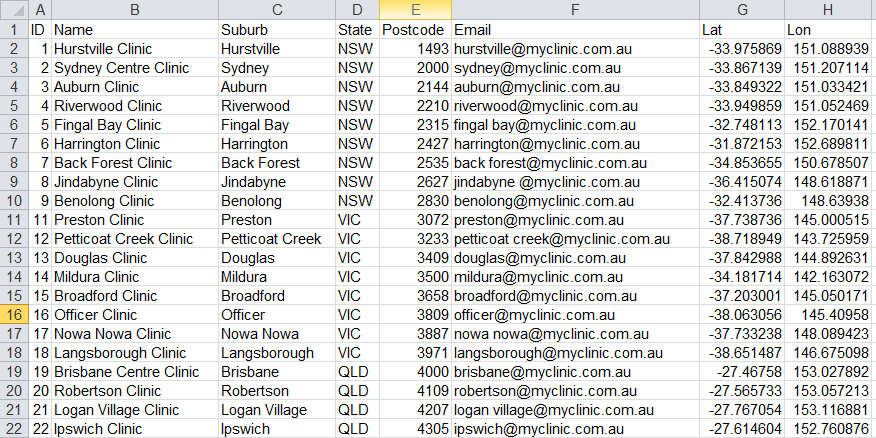 Whole code for Cleaning and Merging 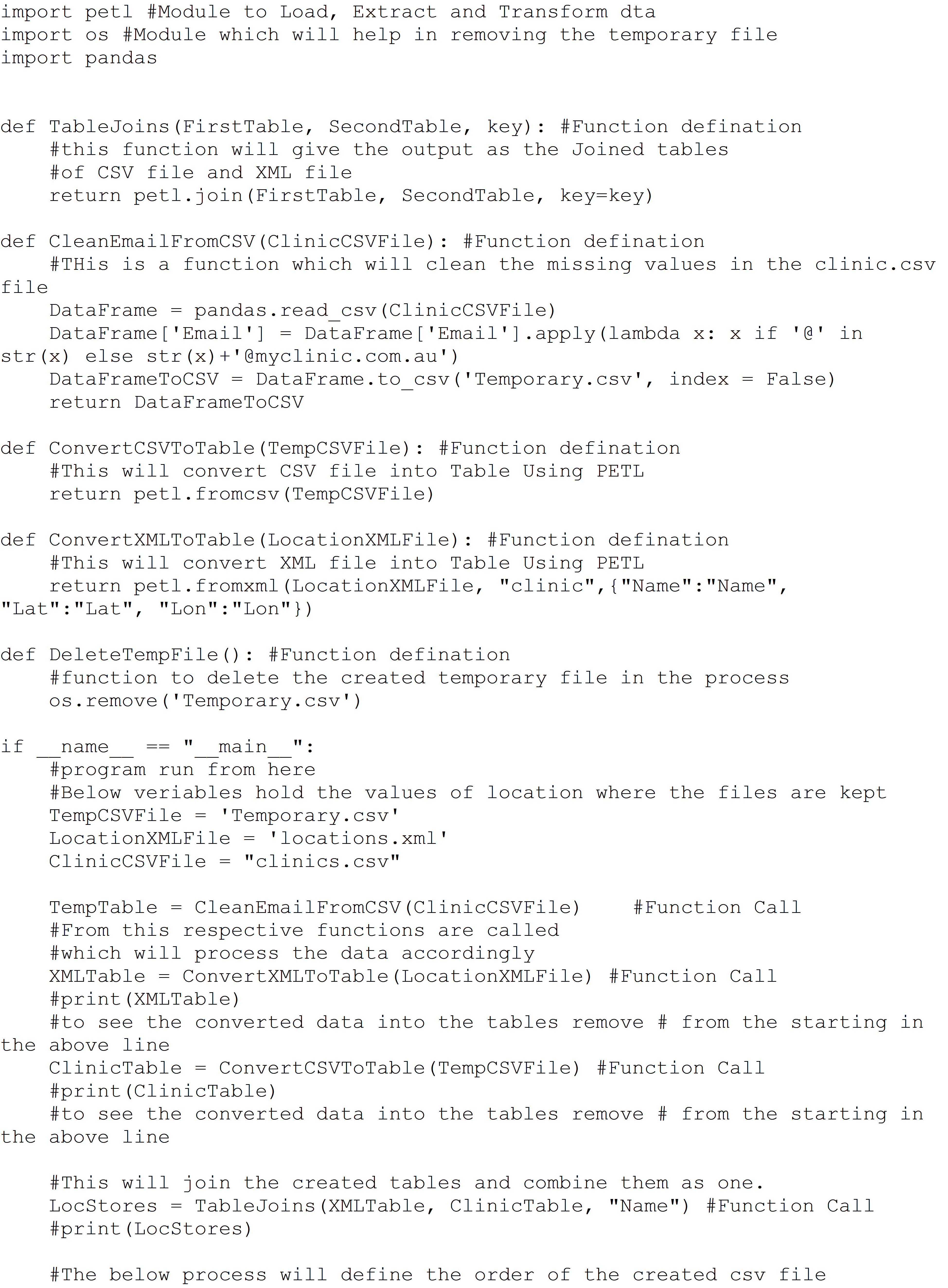 In this project, the URL used is

http://localhost:8080/getlocation?postcode=abcd (abcd is the postcode that the user will enter in the web browser to run this service)

To start the service there is a file called clinic_locator.py open that file in PyCharm and run it. This bottle implemented framework which will be running on default web browser. The data will be taken from the previously created csv file “clinic_locations.csv”. This web service will return the output in the format of JSON, which will be fetched later by the next process (discussed in next step). To run this process the system must have previously installed Bottle module in it.

Output in the PyCharm 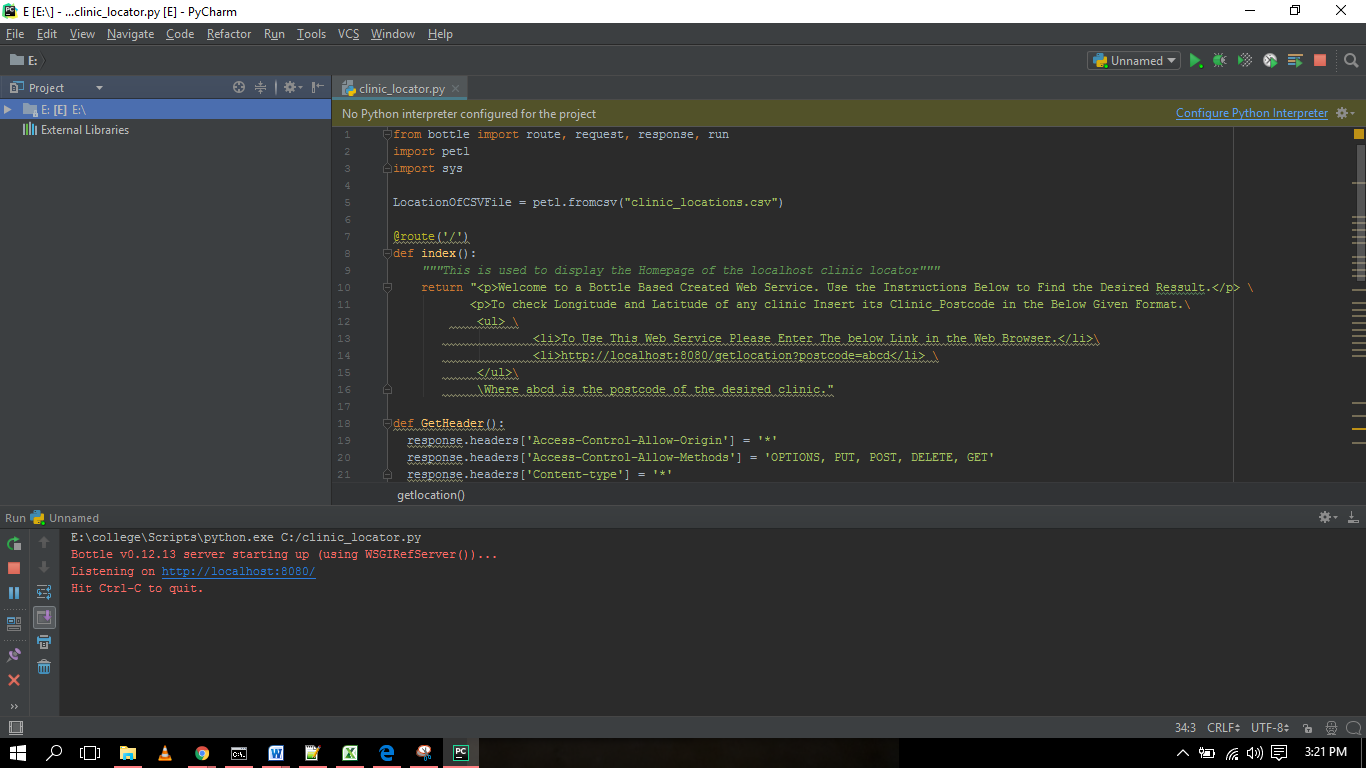 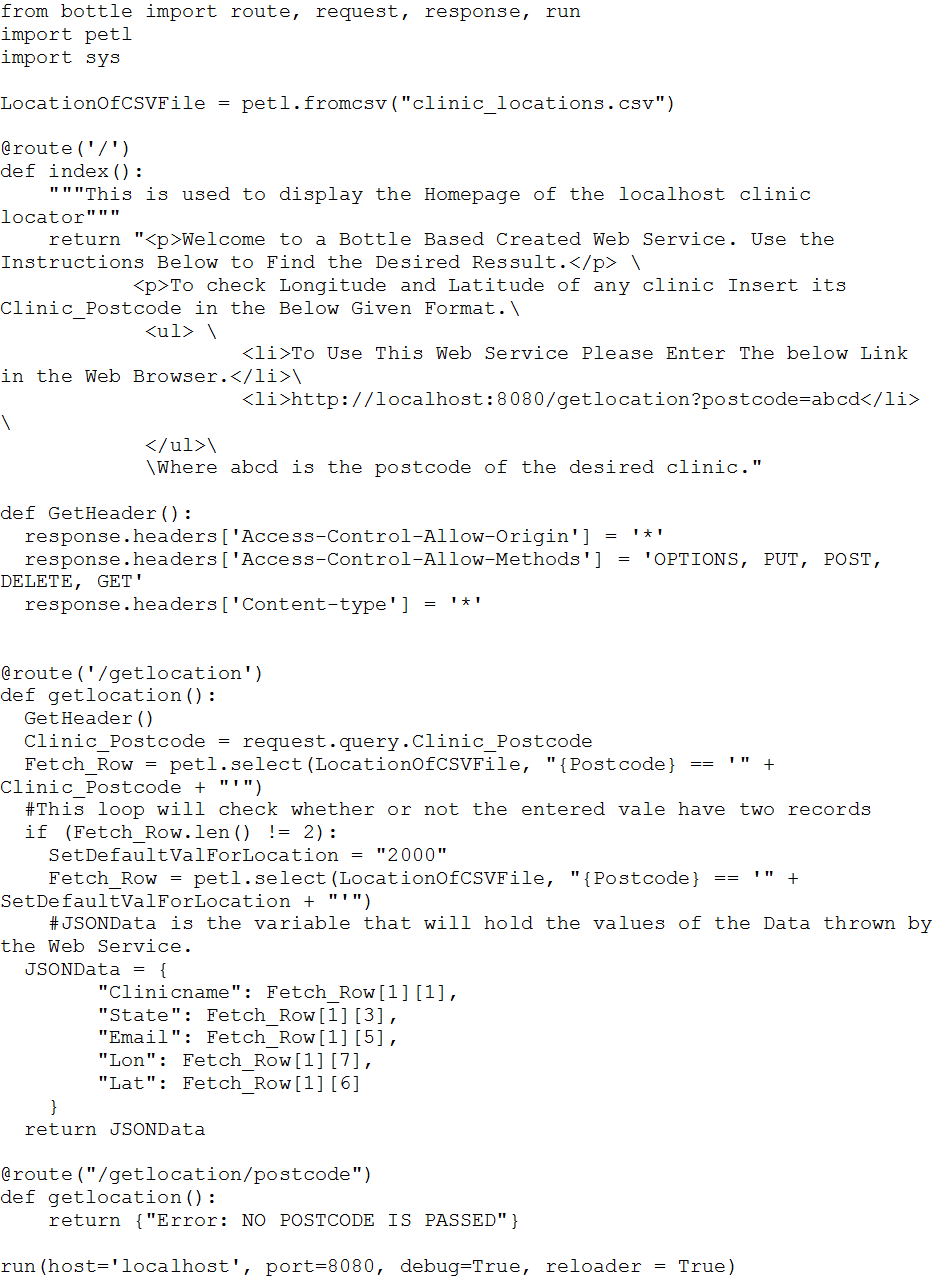 Output of this phase

The Figure 12 shows the output that we get after running it in PyCharm. The output is in JSON format because it will send the data over network in a structured way. Also, JSON is the most used format to communicate between the servers sometimes web applications.

The in above figure the postcode that is passed is 2000 which is postcode of Sydney.

The output has several values

1.A RESTful Web Service is made which takes input from the output of the python code written of the on system processing of the data

2.The Output of the RESTful Web Service is fed as an input to the Mashup application as JSON data and further processing is done.

In this,  HTML file is created with the help of CSS and JavaScript from scratch. The file created in this process is clinic_map.html. The Objective of this Mashup is:

1.The Created HTML web page will take input from user in the form of postcode

2.The HTML page will fetch the data from the RESTful web service created in the previous step in the JSON form and will display the location on the Google map.

For showing the Google map the Google API is used. From this API I could show the location of the clinic whose postcode is entered in the search bar.

Sources of this Mashup

There are two sources of this Mashup:

1.The clinic_locations.csv file which I have created in the first step after Data Cleaning and Data Merging processes on the Locations.xml and Clinics.csv files.

2.The RESTful Web Service That is performed in the previous step in order to start the Web Service.

Implemented code for this process

There are three programming techniques used: 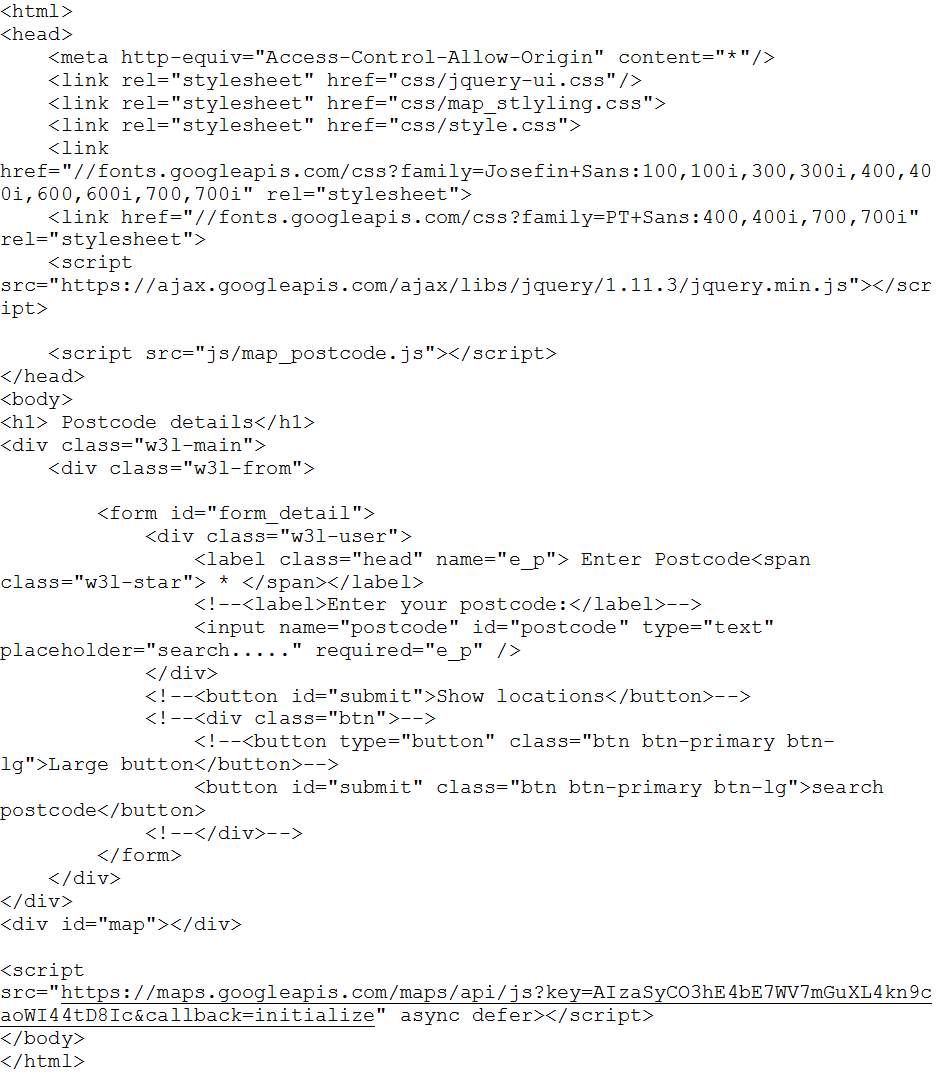 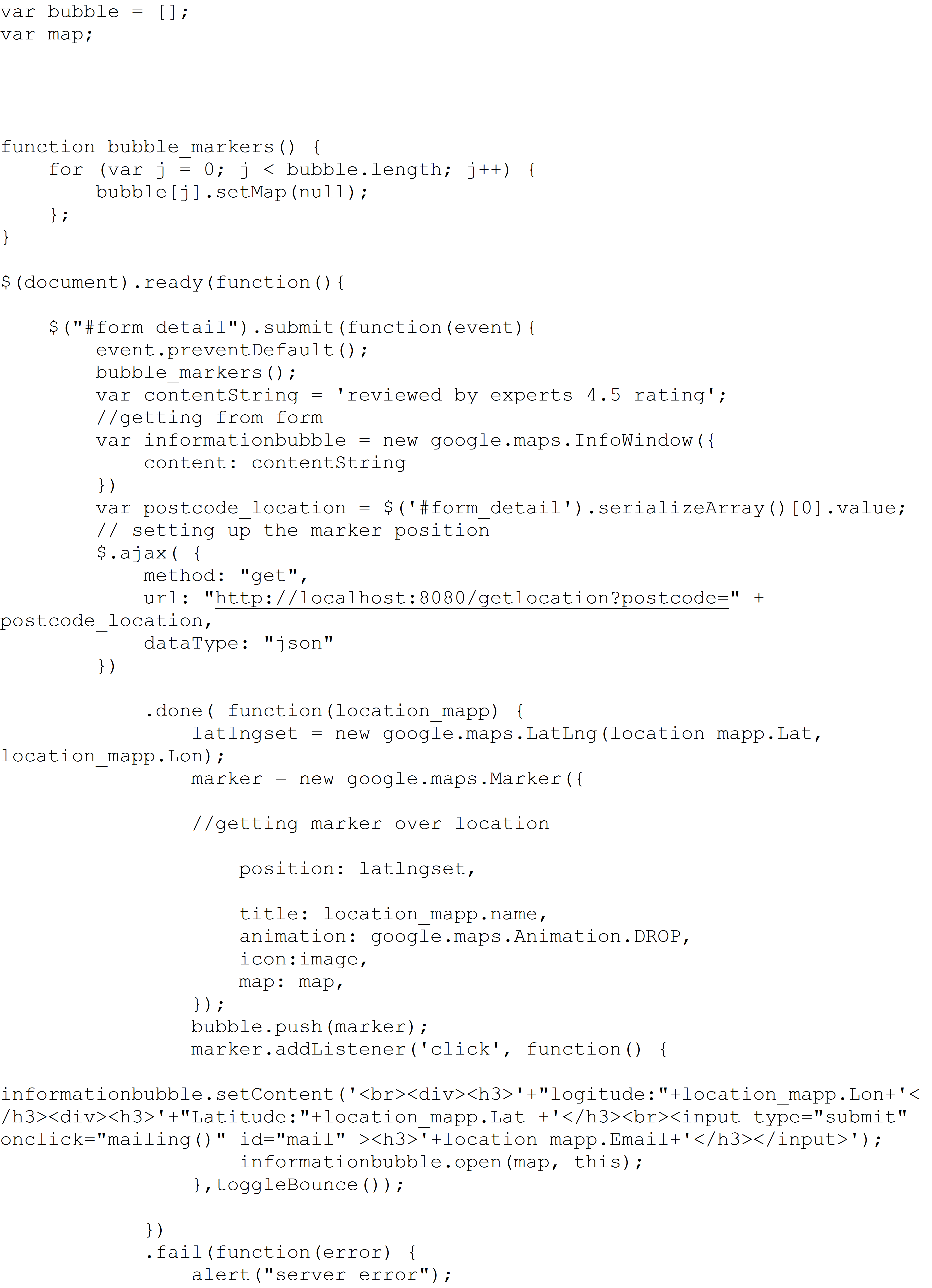 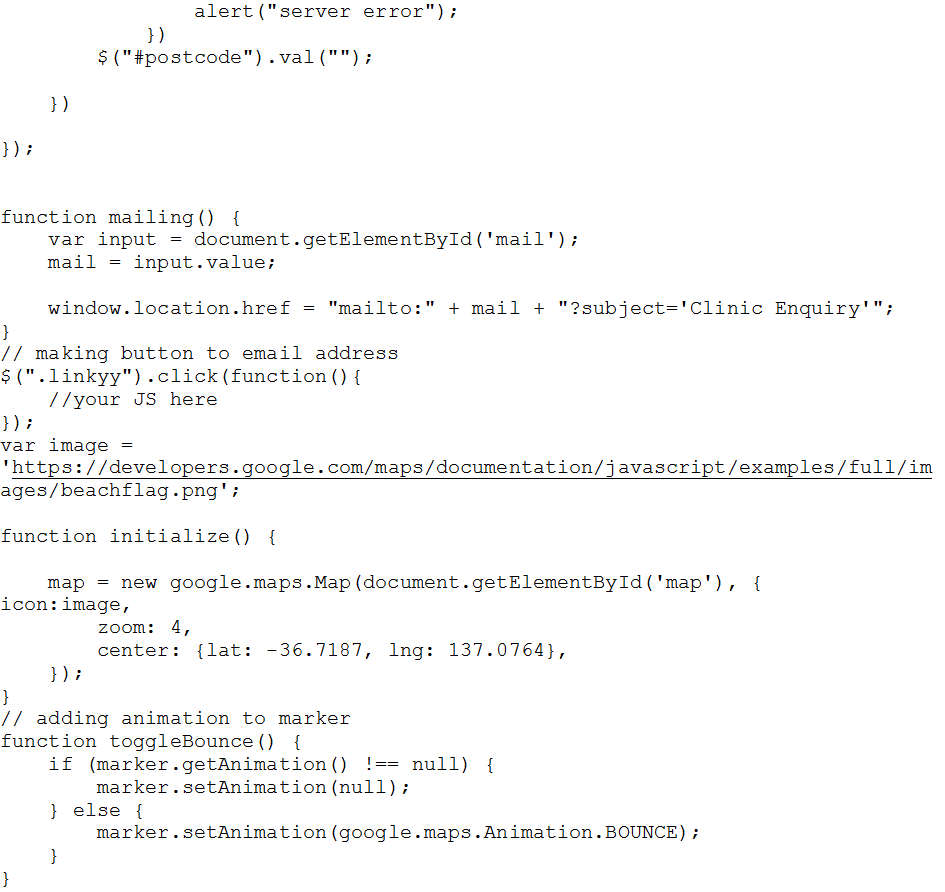 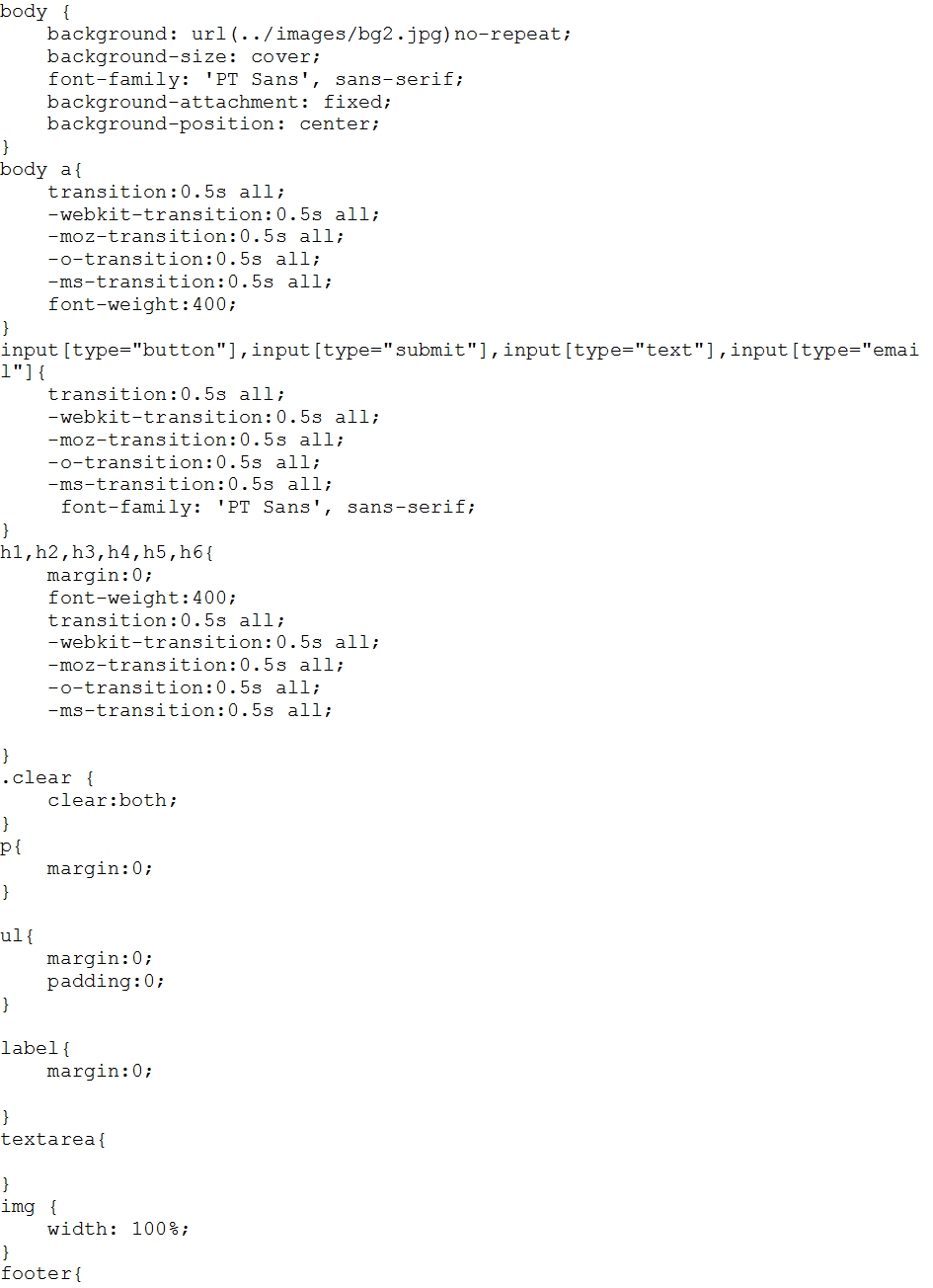 Figure 18: Style file in the CSS

Run Clinic_map.html in the browser 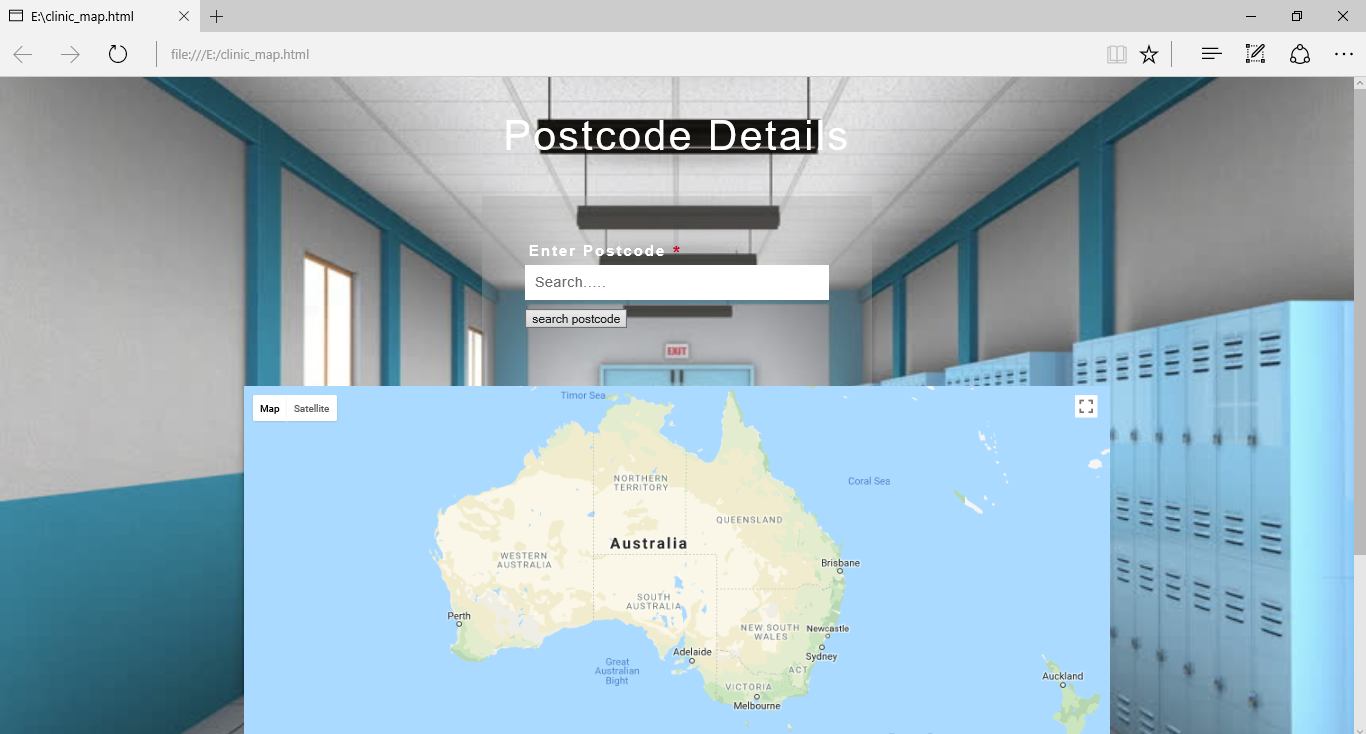 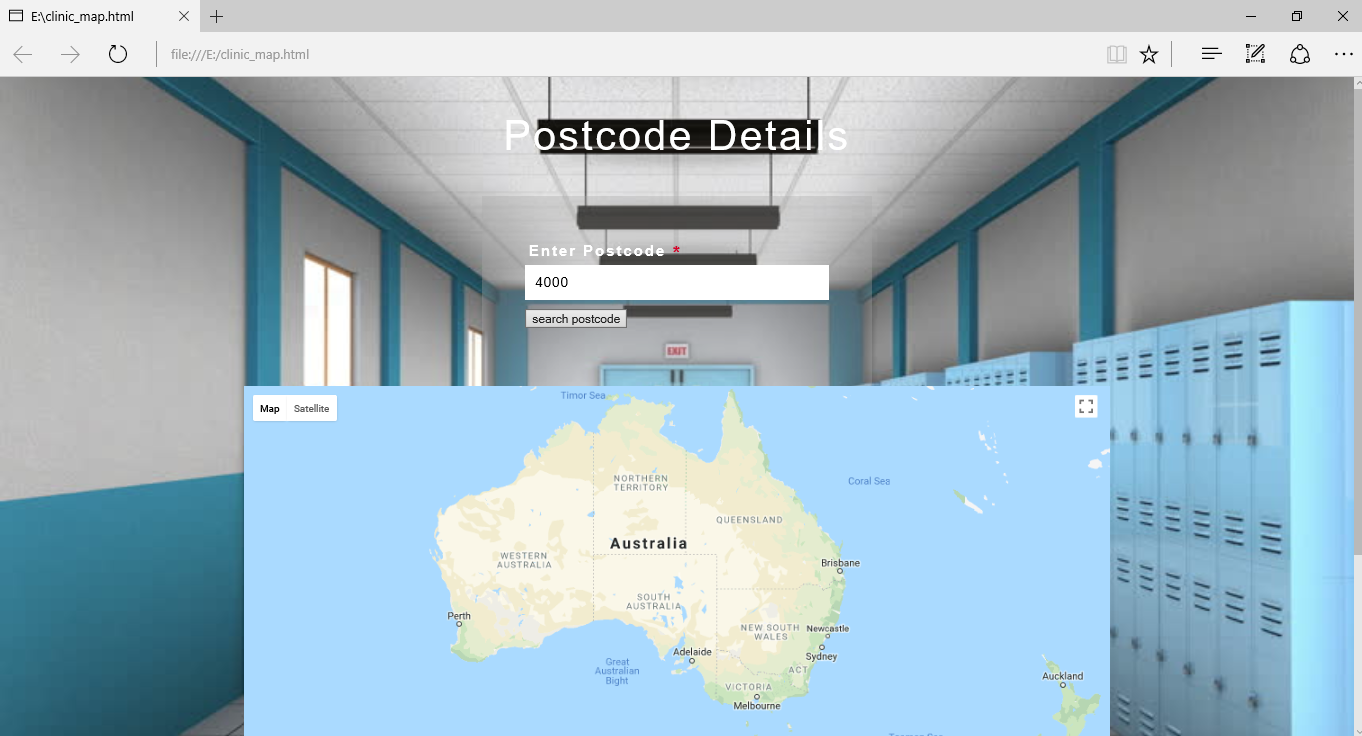 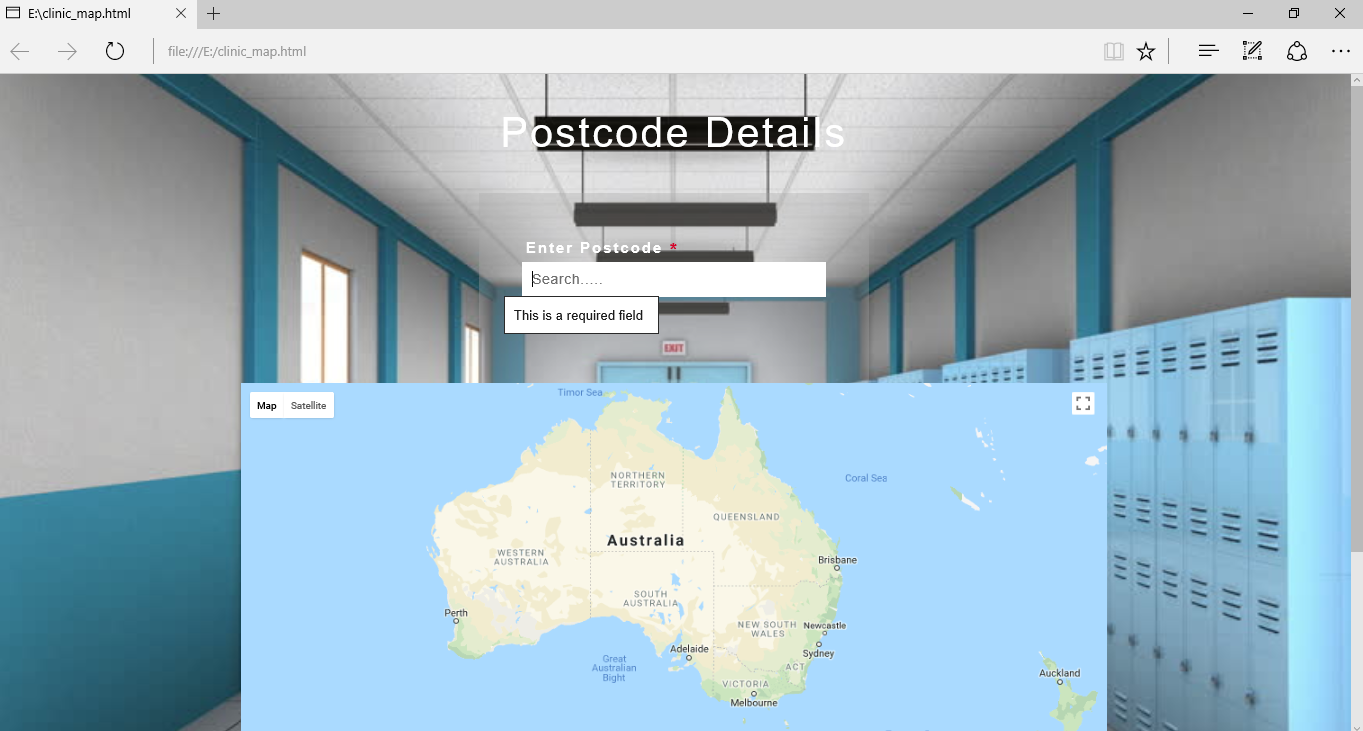 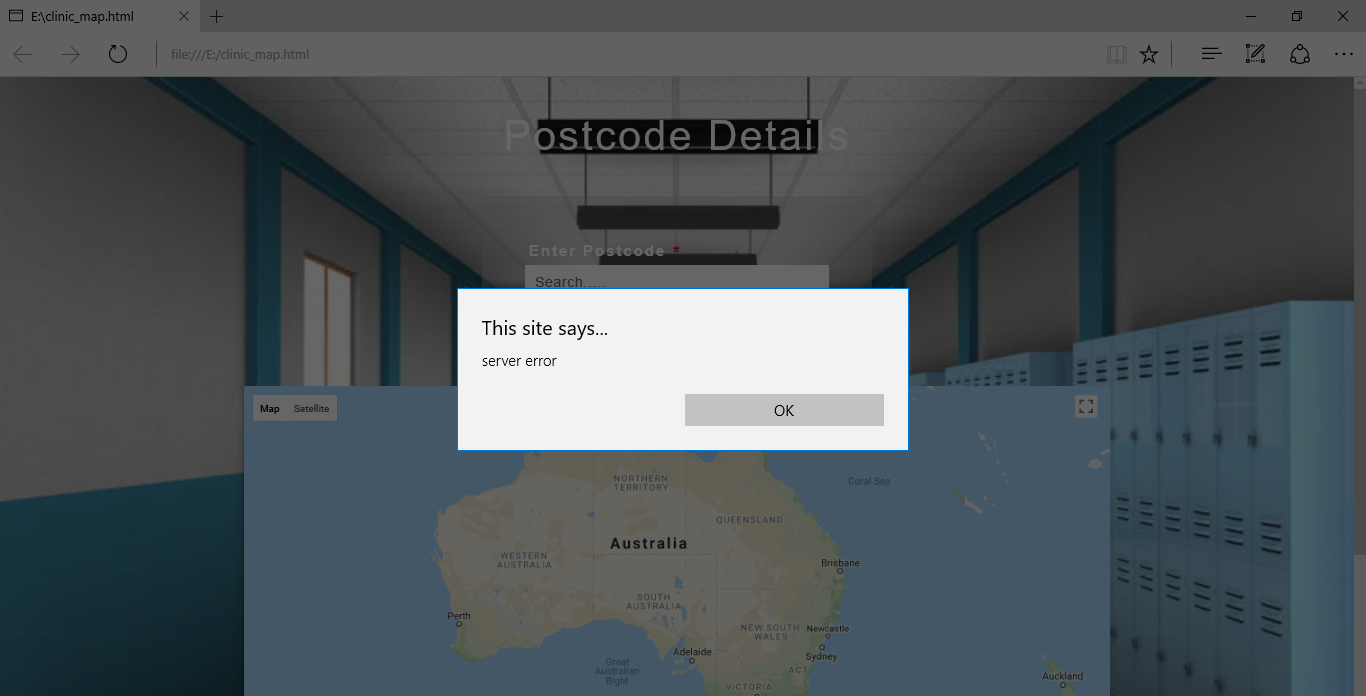 The submit query button will directly redirect to the mail client and the subject line will already be filled with the “Clinic Enquiry”.

The project is implemented in three Phases:

3.Bottle must be installed

For Data Cleaning and Data Merging

First, open PyCharm IDE in it 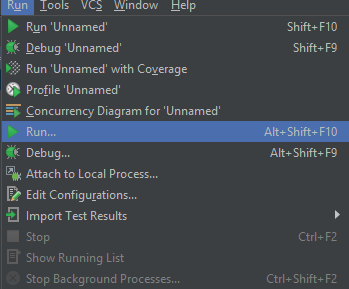 2.Find the specified path of the Python Interpreter 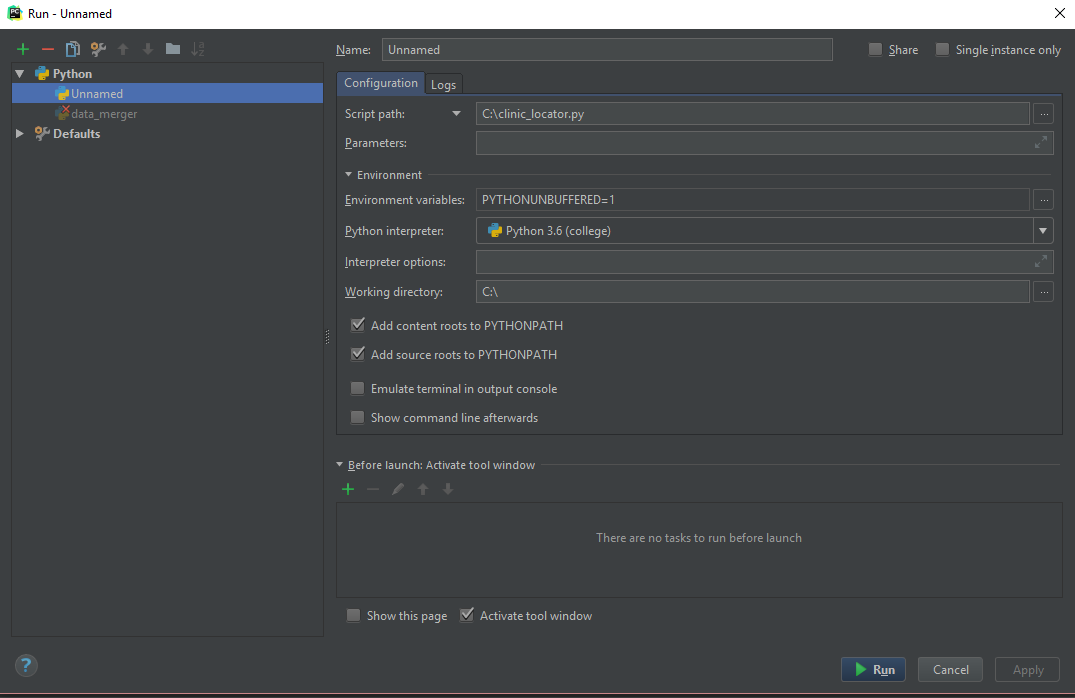 The process is same for this service also.

Just Edit the path and run the application

1.To run this the user must have an internet connection for the Google maps to fetch.

2.Now click on clinic_map.html file which will open it in your default web browser

Figure 31: Open in the default browser

1.You will see the figure shown below 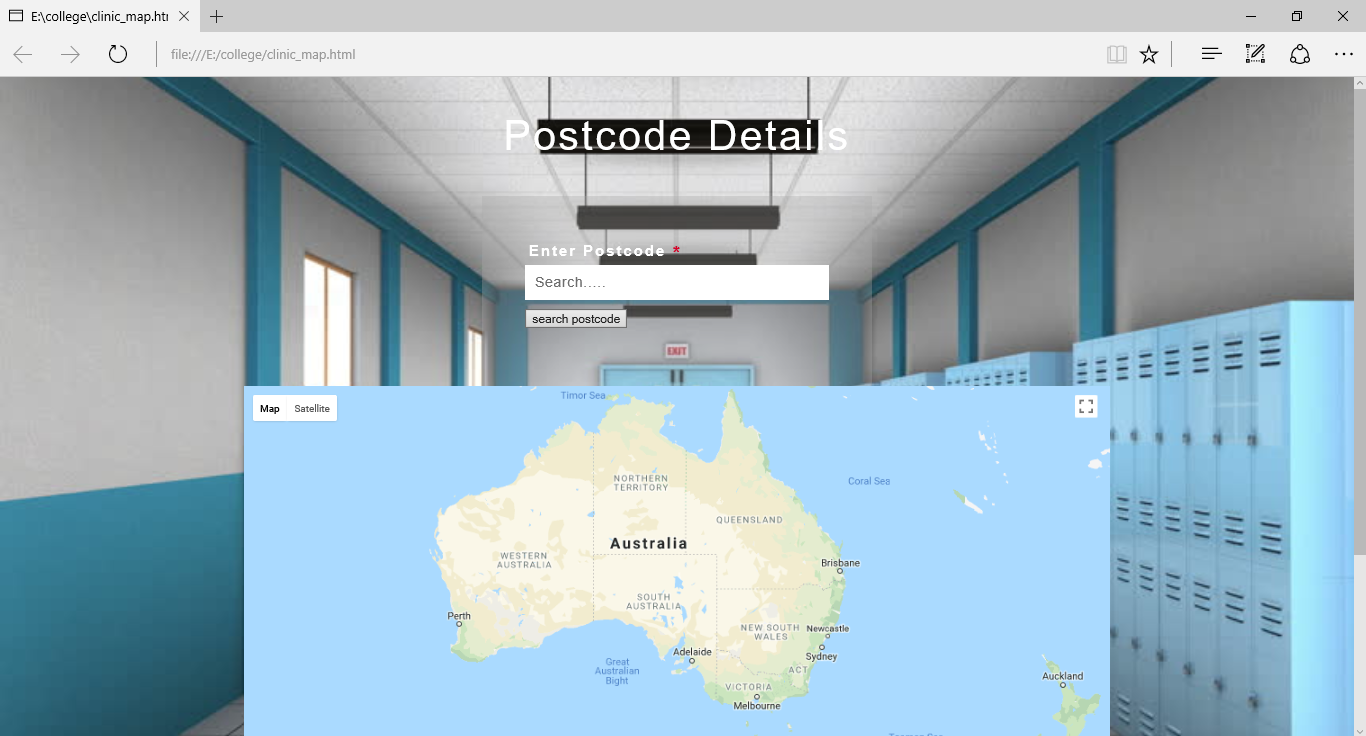 Figure 32: Homepage of the Mashup service

In the Nutshell, this report focuses on creating a Mashup application using which the patients can find the location of the desired clinic using the known postcode of that clinic. The postcode will search in the csv and match up with the location if the location is displayed it will be shown if not present the default location will be shown.

To achieve this, several things are done. At first, the data that is given is cleaned for missing values and then merged with the different file types. The output is then stored in a file which is used by both clinic_locator.py and clinic_map.html as an input file. This is an important step as it will change the entire result.

In the second step, a web server is designed using Bottle framework. It takes clinic_locations.csv as input and returns the JSON data which is later used by clinic_map.html to search and display the locations.

In the last step, a Mashup application is developed using above two processes. Using the files created above as input this Mashup application displays the location of the clinic by getting the postcode from the user. Also, an Enquiry button is given which will help the user to send a mail with an already filled subject line "Clinic Enquiry” in it.