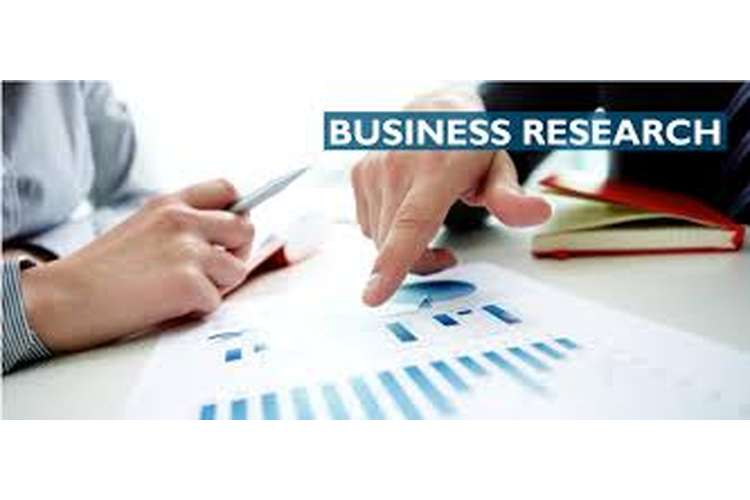 Therefore, type 2 disease has now emerging as a chronic disease affecting the employees wealth. This has made the organisations to focus more on the health and well being of the employees. Many health and safety professionals made this issue as their top priority mainly in the mining sector. Due to excess diabetes among the employees result in less productivity, high absentees, poor health issues etc. These aspects have been high among the male workforce in the mining industry.  The increased risk of the diabetes has further effects of overall productivity and mining employees well being. Type 1 diabetes is mostly an autoimmune which is diagnosed in childhood itself however the type 2 is mainly identified in adult hood and is mainly contributed based on the lifestyle issues. It is noted that in Australia, the employees in the mining industry possess high type 2 diabetes, mostly these are found in male employees. A higher diabetic employee tends to deliver low productivity, high in absenteeism and affecting their health. Therefore this study is to concentrate on the effect of workplace behaviours of the employees and its influence on diabetics on them.

The first step is to frame the aim and objectives of the research: The aim of the thesis is to identify the effect of workplace behaviours of employees influencing diabetic in the mining industry

1. What factors of workplace behaviours cause diabetics for the employees?
2. What is the percentage of employees currently suffering from diabetics?
3. What health initiatives need to be undertaken to control of diabetics among the employees?

The mining industry has entered a new era of health and safety. The present industry requirements is no longer in relation to just protecting the injury and environment hazards of the workers, it also includes in enhancing the wellbeing of the employees in mining industry. Type 2 diabetes is a serious chronic disease that is estimated to be 30 million Australians over the next 20 years. Described as a silent epidemic, many people suffer from type 2 diabetes for a while without the diagnosis. The term diabetes is a set of conditions where there is excess glucose (sugar) in the blood is high due to a lack of insulin or ineffective insulin. The most common type of diabetes are Type 1 and Type 2. The workers in the Mining industry are noted to have increased risk due to the presence of type 2 diabetes in many kinds of situation. Obesity is a major risk factor for type 2 diabetes. The mining sector has the highest percentage of overweight and obesity than any other sector in Australia, 76% of miners are overweight or obese. Minors have also shown that the higher rates of high blood pressure as the population are another major risk factor in diabetes and other chronic diseases. Moreover, at work - power and nature of mining work puts workers at risk of type 2 diabetes and other chronic diseases: (Ellis, 2014)

Mostly male workers are affected which is at least 80% of the total workforce. As independent risk factor for male type 2 diabetes, and men are more likely to be overweight or obese than women.

Shift based employees: the rate of diabetes among shift workers has a higher rate of obesity are working longer and more frequent changes. Shift workers are more likely to smoke and to follow a diet that risk factors for the disease.

Desk based jobs: prolonged sitting, such as increasing of many mining job associated with increased waist circumference and mortality.

Mining is an important industry in Australia. This is an important contribution to the Australian economy. iron mines in Australia, nickel, bauxite, copper, gold, uranium, diamonds and more ore. Every coal mine state of Australia. It is used as energy source. Despite the economic advantage, the mining industry has its drawbacks. The downside to health and the environment people live and work in the mines. The study of attitudes move health care in Western Australia. (Joyce et al, 2013) Most shift workers was fly-out (FIFO). Most workers FIFO male. suffered health problems as smoking, obesity, diabetes, alcoholism, etc.

According to a study of emissions - coal mining than zero (Australia) for specific diseases studied. It has also studied the incidence of certain diseases in the Hunter region of Australia. (Colagiuri Cochrane and Girgis, 2012). Important information study on the health of people living in the Hunter region. He found a prevalence of diabetes and heart disease in children and newborns in the coal mining community. The study also showed the indigenous people living in mining towns in the presence of type II diabetes and cancer. They have also shown a link to diabetes and particles. (Rajagopalan and Brook, 2012). Interception occurred in mining Pilbara found to be more than 53% of diabetes. (Ellis et al 2014). Thus, it is necessary that examined the health workers in the mining industry and the people in the mining towns. For this purpose, both in Australia and diabetes prevention programs under the Australian Government and type 2 diabetes control (Post et al 2015), the development of health in the workplace has a role in the treatment of cardiovascular diseases, diabetes. pre-procedure model (PPM) were used in Australia and the Australian government to implement diabetes initiative to control type 2 diabetes. The online survey was used to collect data. Diabetes roleplaying, received support and the process by which diabetes. (Speight et al 2012). Telemedicine has also been used as a medical treatment. They can be targeted to communities in certain diseases. (Sorenson et al 2015) 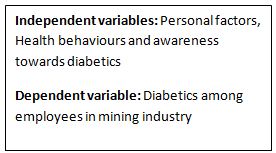 Null hypothesis:There is no significant relationship between personal factors, health behaviours and awareness on diabetics among employees in mining industry

Alternate hypothesis:There is a significant relationship between personal factors, health behaviours, and awareness on diabetics among employees in mining industry

3.Appropriate research methodologies and techniques to use for the research project 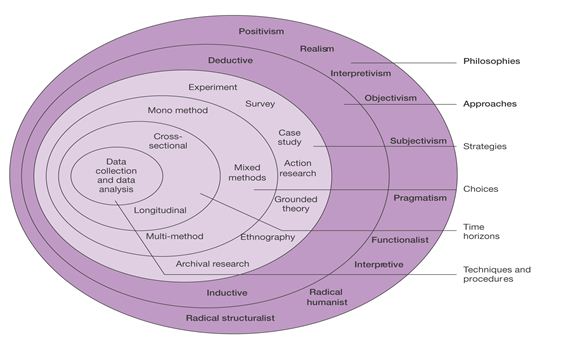 The first process activity in the research is to state the category of philosophy which the research scholar must undertake in order to do the stated work. It states in detail about the research background with focus on its nature and the mode of data collection etc. This research work will work on the function of realism research philosophy, the concept of realism concentrates more in terms of reality which currently exist in the environment. People knows that the causes of diabetics is mainly due to personal habits like smoking, high calorie food or health behaviours like sedentary lifestyle, high blood pressure etc. These are already prevailing in the environment therefore this research will adopt realism philosophy. After the philosophy, the research scholar decides to adopt, this provides the pattern of gathering the information. The researcher will use deductive approach, which is focused more from general approach to specific approach. The deductive approach also aims in first setting the hypothesis and test the hypothesis based on the data collection. This research will use quantitative research approach, because the primary objectives are to understand the factors which will influence diabetics among the employees in the mining industry. The data will be mainly generated through numerical data based on opinions, behaviours and responses received from the employees in mining industry

The sampling approach for this study is non-probability sampling i.e, the sample population and the data are sourced where the respondents who are present in the population based are not given equal chances, this is due to lack of time and other factors. The sampling type is purposive sampling method used, which means sample is stated with a basic purpose in mind. The research scholar will specify a predefined group, because this research is focused only in gathering the data from the employees who are diabetics. The next step is the method of sourcing the data from the respondents, the instrument used is Questionnaire method. This method will use likert scale rating method, with the options of Not important, Less important, Neutral, Important, Very important. 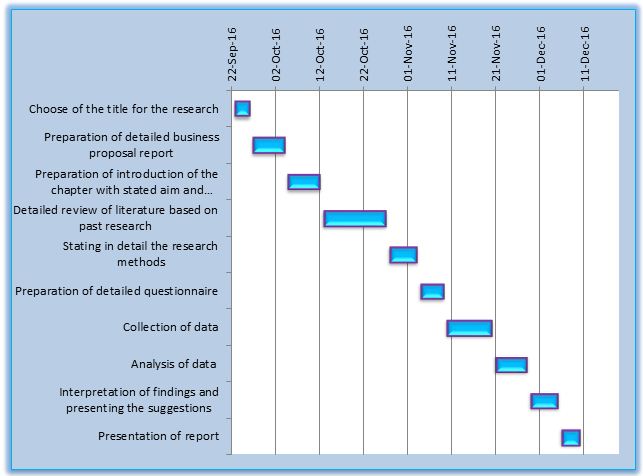 5.Description of the research process

The research process contains the series of steps which has to be carried out by the research scholar to measure the key factors influencing diabetics among the employees in the mining industry. The steps involved are:

Literature survey:Once the research issue is identified the scholar will do a extensive review of the literature which has already been carried out in the given issue.

Hypothesis setting: This research is based on realism which will enable the researcher to set the hypothesis.

Research design:Once the objectives and hypothesis is set, the scholar will state the research design and philosophy, mode of sourcing the data etc.

Findings and conclusion:After the data are analysed, the key findings are identified and conclusions will be stated. Once the entire research work is completed, the scholar will suggest the suitable recommendations

The data collection aims in sourcing the key data and information which will be collected by the research scholar in order to use them for the research work. This thesis will aim in collecting the data from secondary data source and primary data source.

Secondary data are those which will be collected from the existing sources like Books, Business magazines, websites, research articles etc. These data will supplement the primary data source. This data sources are cheap and less time consuming process and less flexible.

Primary data are real time data sources; the researcher will himself collect the data from the questionnaire. This is costly and time consuming process and directly benefits the researcher in performing the research activity. After the data is sourced through questionnaire, the data will be analysed using statistical tools, the scholar will use percentage rate method, chi square test, correlation analysis, multi regression analysis etc.

The basic purpose of the research is to identify the effect of workplace behaviours of employees influencing diabetics. The scholar will tend to use key empirical data in order to determine the effect of workplace behaviours. Many employees in the mining industry were affected by diabetics, due to various reasons like personal factors, food habits, awareness towards those disease etc. Previous study has stated that there is more employees affected by diabetics in the industry and a proper healthcare interventions will help them to recover from the disease and improve their wellbeing. The companies involved in the mining industries should focus on enhancing their livelihood and wellbeing by offering suitable programs and awareness on diabetics and take steps to control them.