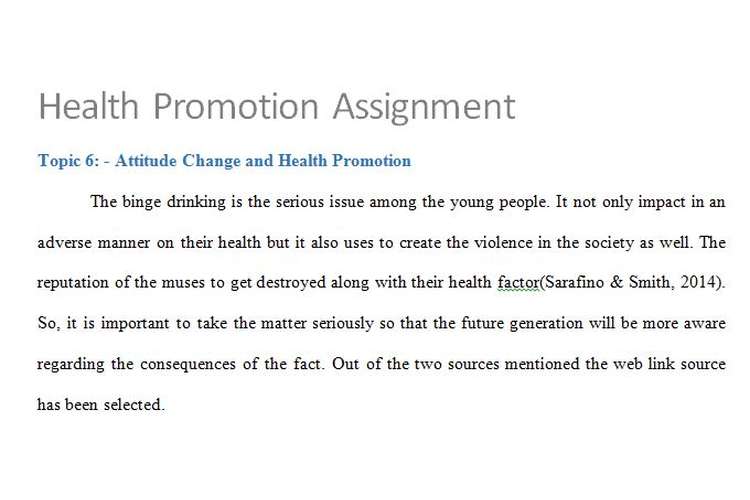 The binge drinking is the serious issue among the young people. It not only impact in an adverse manner on their health but it also uses to create the violence in the society as well. The reputation of the muses to get destroyed along with their health factor(Sarafino & Smith, 2014). So, it is important to take the matter seriously so that the future generation will be more aware regarding the consequences of the fact. Out of the two sources mentioned the web link source has been selected.

Still the three weakness of the resources is alack of information regarding the prohibition of the binge drinking, no definition regarding the binge drinking and the motivational therapy to be offered to the young generation to stay away from the binge drinking in a practical manner. Apart from the weaknesses here is the strength (Australian Medical Association, 2015). The first strength is that the free guides for the alcoholic binge person for the prevention from the drinking habit have been mentioned. The imitations of taking the alcohol by following the quiz of ten questions are perfect enough to support the people to advise regarding the maximum limit allowed for the consumption of the alcohol. The last strength factor is that the web source also has offered the direct contact number in the form of the proper assistance to the addicted people to get rid out of the problem.

Regarding the efficiency of the selection of the source rather than the brochure source, it can be stated that this source is based on the practical aspects by defining the limit of the drinking. It is also by offering the correct guide so that the people can control them from having the adverse life after taking the drink beyond their limits. The number for the assistance also has an added advantage. As this binge drinking sometimes use to get associated with the psychological problem, so the number mentioned I the website is quite capable of assisting the people to get the moral support as per their requirement which is likely to push them away from the adverse life that they use to spent. At the same time, and binge drinking related query are about to get a reply using the assistance number. These all practical information are not provided in the brochure. Hence, the web source has been selected.

A ) The case study is based on Alex, who is 42 years old lady. Before many years, Alex has started to smoke and till now she is continuing the fact. When Alex was asked that whether she has tried to quit smoke, she replied that she has tried but in vein. This is based on the delusion act, where people use to know regarding the negative part of the habit but is reluctant to stay away from it. It is one kind of the disorder. She has started the smoking from the fact of the high depression. It was one of the reasons that Alex used to perceive herself inferior to others. The removal of the hostile behavior, as well for the anger maintenance, and the maintenance of the anxiety, Alex has started to smoke. The complete reason behind the acceptance of the behavior was relatedto the psychological terms such as depression, the feeling of the inferiority, and the feelings of the hostility, and anger.

On the other hand, when she was asked regarding the reluctant behavior, she has mentioned that no such reason is there behind. It again reflects the term of the Delusion act. As per the delusion act, in spite of knowing the adverse effect of the habit, people feel that they are deprived of all his / her rights and wish to follow the same pathway of life as she is continuing. The motivational approach is likely to be offered to her for quitting the habit, and she has agreed with the fact. So, the term of the adherence has been reflected here. At the same time, this reluctant in the behavior of quitting the smoking also use to reflect the psychological term of nicotine ingestion. Here, the lack of the self-efficacy also is responsible for the behavior of Alex in such manner. So, in a nutshell, the three psychological terms related to the continuation of the smoking habit of Alex are Delusion act, the lack of self-efficacy, and the concept of the adherence in an effective manner.

B ) If one individual plan for quitting the smoking then there are two major factors where the individual is at the risk of relapse are as below:

There are strategies in the form of the action plan for the patients those are willing to quit smoking:

Topic 8: Alcohol Use and Abuse

The indigenous people of the Australia is using the alcohol in alesseramount, but they are using that Alcohol those are harmful to them than the non – indigenous people in Australia. So there should have some strategies those will likely to reduce the harmful, effect of the alcohol usage and also prevent the people from taking the harmful alcohol. The strategies to be used are as below:

In this aspect, the government of Australia should impose the greater amount of tax of the high rate alcoholic products than the low rated one. The restrictions should be offered to the places of Australia where the high leveled alcohol is used among the people of Australia(Smith, et al., 2013).

The alcohol diversion program has been established by the government to reduce the demand for the alcohol. Promoting the safer drinking environment also is required in this aspect. The proper education in schools and the colleges also have been implemented so that the future generation will be aware regarding the adverse effect in an effective manner(Gray, et al., 2014).

Though the strategies have been applied in an effective way.But the rate death due to the adverse effect of the alcohol has not been decreased in a large manner. The 7 percent of all the death of Australia has been reported due to the effect of the harmful alcohol intake by the indigenous people of Australia(healthinfonet, 2016).

To increase the effectiveness of the strategies, it is important to ban the harmful alcohol with the imposing of more tax of these products. At the same time, the continuous health checkup should be made mandate so that the intake of the alcoholic impact can be measuredin an effective way. The limitations of the alcohol consumption should be declared to the most affected people and also in schools and colleges by establishing the awareness program. The different organizations and NGO also should spread the health care important message from the negative effect of the alcohol consumption. At the same time, it is also important to the government for the continuous evaluation of the implementation of these strategies, so the successfulness of the strategies can be measured. It is also important so that the government of Australia will be able to take the innovative techniques to reduce the effect as well.