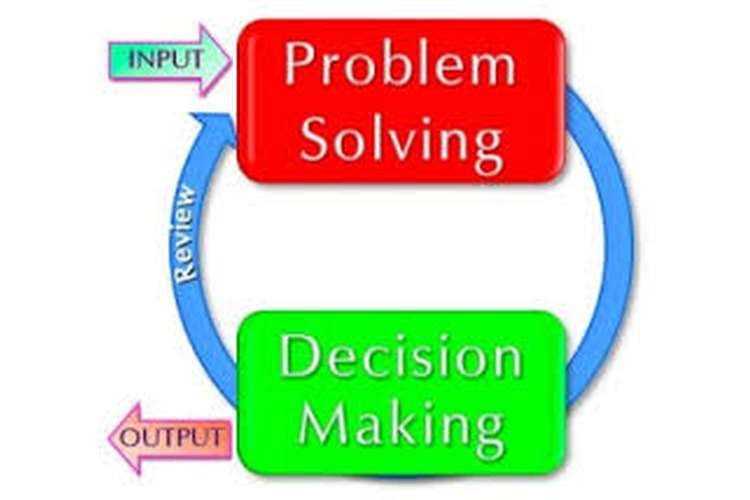 This is a solution of HC1062 decision making and problem solving assignment in which we discuss mobile telephones and a flat world, mobile telephones market, consumer behavior, research methodology and data collection and data analysis.

The mobile phone market has been growing tremendously and with the introduction of Smartphone’s in the market it has changed the communication philosophy in the world. The volume sales of Smartphone’s exceeded the previous generation phones in the year 2011 as consumers started adopted advanced features and applications which allow them to communicate faster (Euromonitor International, 2012). There are many companies that are operating in Australia and offers variety of features, schemes in order to gain the customers.

There are many things which make the mobile phone market complex such as price, quality, different features, and brand etc (Horst et al, 2006). The features can be segregated into two, one being core features such as voice calling, short messaging service etc and other being secondary features such as camera, internet availability, different software applications etc. The price of the product plays an important role along with quality of the product (Ling, 2004). The price is often associated to quality and the brand of the mobile phone significantly affects the sales of the product in the market. The launch of Apple iPhone 4S in the Australian market increased volume share of Apple to 45 % in 2011 from 37 % in 2010 (Marketing Magazine, 2012). The different companies offer the product with different features and price and are increasing their presence in Australia. 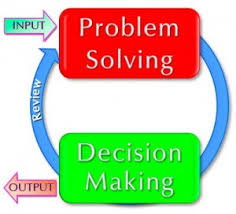 2.1 Mobile Telephones and a Flat World

There are many players in the mobile telephone market and Samsung, Nokia, Applet, HTC and LG are the leading players. Currently, the mobile handset market is governed by Smartphone’s in which uses are provided with enhanced features andoperating systemslike Android (Roxas, 2011). The Nokia has seen a decline in the market share in Australia in the mobile telephone market and the intense competition between Samsung and Apple has taken the market to new generation. The introduction of smart phones and with enhanced features including camera, internet and Bluetooth has not only increased the sales of mobile telephones but also has decreased the sales of other products like camera (Mobile Industry Group, 2012).

The Google Android has taken over Apple’s iOS in Australia and nearly three in five people in Australia are Smartphone owners above the age of 16 (Marketing Magazine, 2012). Android growths is affected only when there is new iPhone release and before and after the Android market shares are seen as growing at inclined rate in Australia. 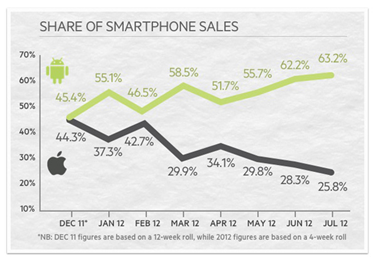 The access to greater range of services and applications through Android has toppled the market of iOS in Australia and it is seen the IPhone owners are those who lie in high income group and can own an iPhone (Roxas, 2011). The Nokia market has been declining since the introduction Smartphone’s and Samsung gained the major market share at the same rate.

The consumer behavior affects the purchase decision and helps in making the purchase. There are nearly 59 % of the people below the age of 16 who are Smartphone owners and the market consumer is getting more and more choices in the same price range (Marketing Magazine, 2012). The Price of the mobile telephone is the strongest factor that affects the purchase decision and that also affects the customer liking and disliking towards a specific mobile telephone (Munusamy et al, 2010). There are new features such as Camera and internet access that affects the decision for a purchase. Also, as the technology is changing at the faster rate the integration of other technologies in the mobile device will also affects the consumer to make a decision (Munusamy et al, 2010). The consumer liking towards Samsung and iPhone will shape the intense mobile Phone market in Australia in the future. Along with HTC and other brands would see a surge in the market share which would attract more and more consumers.

The sample size would be 50 respondents and the people would be known to us such as friends, family or at work.

The primary data is being used in the form of questionnaire (Crowther  et al, 2012) which would help us understanding the various factors responsible for choosing different mobile telephones and which suffices all research objectives

The secondary data analysis has been done through various journals, academic articles, newspapers, research papers, text books and various internet sites which would help us to understand the data and present us with some conclusion (Frenz et al, 2009).

Q 3: How long are you using the mobile telephone? 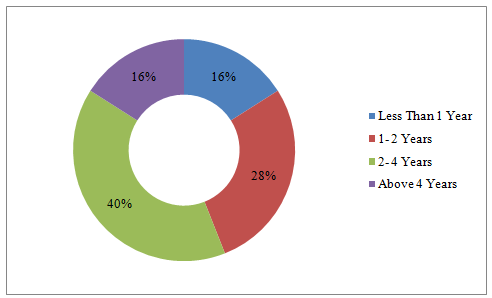 Q 4: What Mobile Telephone would you like to have? 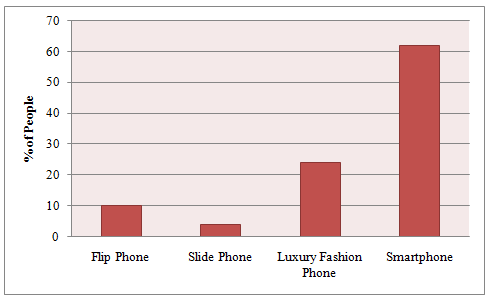 The above figure shows the preference of the people towards the various phones in the market overwhelmingly there are 62 % of the respondents who would prefer Smartphone to have. The importance of Smartphone is increasing and hence it is the reason the demand and market of Smartphone’s is increasing. Also, there are 24 % of the respondent who believe they would prefer luxury fashion phone while flip phone and slide phone is preferred by only 10 % and 4 % of the people.

Q: 5 What size of handset you prefer?

The size of handset is important which governs the user preferences and liking or a mobile telephone. There are 44 % people or 22 out of 50 people who prefer large phone and small and medium mobile telephones are being preferred by 26 % and 30 % of the people respectively. The companies have started manufacturing mobile telephones which are large in size and people preferences have changed since Smartphone’s have entered the market.

Q: 6 Please rank the below options you consider based on their level of importance when choosing a mobile telephone? 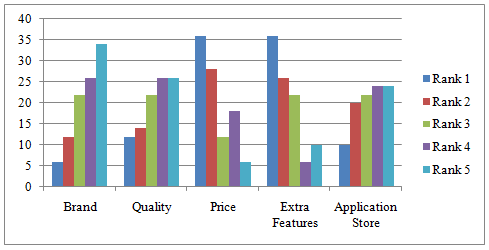 The respondents were asked to rank the various options they consider are important for choosing a mobile telephone. The Rank 1 was marked by 36 % people to Price and Extra features were also marked as Rank 1 by another 36 % respondents. The quality and brand are also important factors but not as important as price and extra features in the mobile telephone. The application store is the number of software application and that was also considered important as the most important factor by 10 % of the people.

Q: 7 Which extra feature you consider is the most important for you in the mobile telephone? 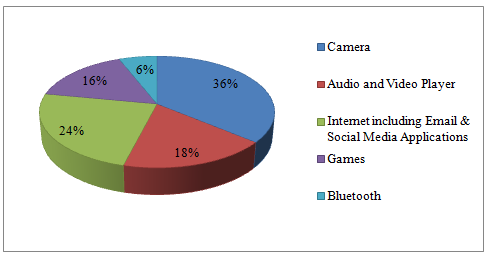 Q 8: How important is design and Style of a mobile telephone as opposed to functionality?

Q 9: What is the most important part of Design and Style of a mobile Telephone? 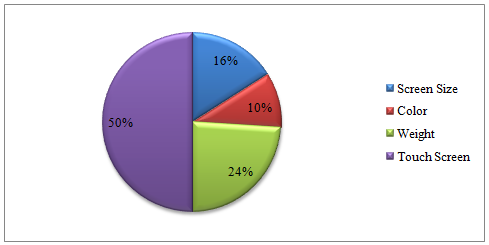 Q: 10 Please rate the mobile telephones as below?

The Apple’s iPhone 5s is in direct competition with Samsung 4 as 36 % of the people have ranked 1 for the Apple’s iPhone 5s while 34 % of the people have ranked Samsung 4 as Rank 1. Also, Nokia Lumia 1020 is recently introduced so this can be one of the factors of its low rating as compared to iPhone and Samsung 4. The above figure also shows the other mobile handsets such HTC 1 4G is giving tough competition to Apple and Samsung and gaining ground in smart phone market.

Q: 11 What would you be willing to pay for a mobile telephone? 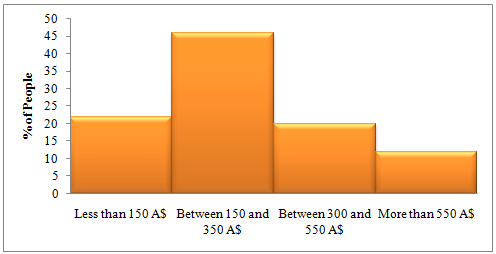 The Smartphone market is gaining the share and people prefer Smartphones over other phones and the brand which people generally buy are HTC, Samsung and Apple’s iPhone in Australia (Mobile Industry Group, 2012). Also, people prefer more on Android phones in the recent past which has affected the sales of iOS for Apple. The consumer also gives higher preference to the application store and the other social media application which help in connecting people and thus making communication much faster.

There can be few recommendations made as part of this study after primary and secondary data analysis. The consumer gives high preferences to price and extra features and hence the companies should strive for augmented & variety features and with increased application store. The organizations should also give higher importance to Camera with high resolution feature and increased software Internet Applications in the Smart phones. The Customers generally prefer large mobile telephones and it would be beneficial for organizations to develop their mobile telephone on customer preferences. If external features are concerned such as style and design, the touch screen is the most important one and hence the players in mobile telephone should manufacture more with touch screen design.

The mobile telephone market is growing at tremendous pace and the Smartphones are replacing traditional phone. Apple and Samsung continue to be the strong player and gaining advantage of declining Nokia’s market share. The Smartphones are gaining high importance and customer are giving high importance to augmented features such as camera and internet software applications and this acts as the factor for customer preferences of one phone over other. There are other factors such as brand and quality which also shapes the customer preferences for the mobile telephones.

6. Limitations of the Study