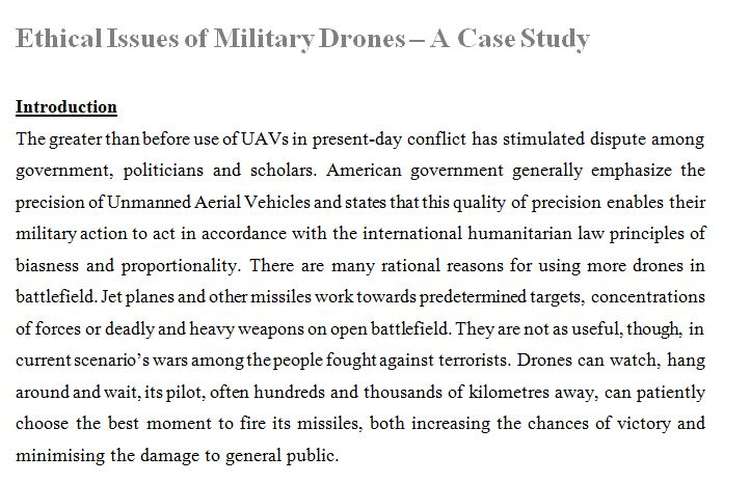 The greater than before use of UAVs in present-day conflict has stimulated dispute among government, politicians and scholars. American government generally emphasize the precision of Unmanned Aerial Vehicles and states that this quality of precision enables their military action to act in accordance with the international humanitarian law principles of Biasness and proportionality. There are many rational reasons for using more drones in battlefield. Jet planes and other missiles work towards predetermined targets, concentrations of forces or deadly and heavy weapons on open battlefield. They are not as useful, though, in current scenario’s wars among the people fought against terrorists. Drones can watch, hang around and wait, its pilot, often hundreds and thousands of kilometers away, can patiently choose the best moment to fire its missiles, both increasing the chances of victory and minimizing the damage to general public.

Ethical analysis of the use of military drones

It can be said that those triggering the launch of the missiles are having no risk, and those who are targeted have no safety against them, particularly when UAVs are placed in hidden or undetected and overhead in large part of the world. Frequently it comes to our notice that persons who are operating UAV are suffering from stress and guilt of their act. After devoting time may be days, weeks or months in launching lethal strikes from their safe place in the USA, resulting in death and destruction to their targets, and after that leaving for home in the evening and doing dinner with their families. It does not seem to be fair.Large number of operators of UAV somehow feels that this is immoral and unethical to launch deadly strikes from a safe position, to take life, hurt and wipe out the remote areas and battlefields.  The enemy does not have any idea what or who hit him or who are his enemies but does not have any kind of means to counter the enemy.

The war in reality is not of between two individuals confronting each other to find out the power and strength.  No doubt it is people who die in war, war is between two or more forces, armies or nations or diverse cultures. The technological advancement has lead to increase in the power and strength. Ethics in military forces are motivated by two basic principles – biasness and proportionality.  Biasness requires that we must target combatants, & proportionality requires that inadvertent or collateral damage, particularly to civilian infrastructure and non-combatants, be proportional to the military value of the target.

Self-directed fatal Unmanned Aerial Vehicles create a exciting ethical dilemma.  Unmanned Aerial Vehicles have been developed in such a way that can be programmed to bring accuracy guided fatal weapons as soon as its sensors establish that criteria have been met, within a fire or do not fire decision matrix. Majority of human beings may not like the idea of a computerised machine or mechanized computer making the decision to fire or kill  Many pre-programmable missiles and bombs have reduced the damage and risk of life of army officers. This has lead us to move in the direction of such Unmanned Aerial Vehicles.

Utilitarianism states that an act or work is good and moral when it results in greater amount of good for the large number of people. It is a theory of normative behaviour which asks a particular question, whether a particular event or action is moral or immoral, fine or terrible.

Utilitarianism answers the above question using an analysis on economic grounds which lays stress on human being lives and states that actions that make individuals and citizens blissful are good. Morals are considered as good or bad. Unmanned Aerial Vehicles have apparent appeal for a country at war. This is because they are without pilot and no human beings are there who can be harmed, Unmanned Aerial Vehicles can enter more unfavourable areas than piloted planes. As in the case of Pakistan Unmanned Aerial Vehicles had flown and struck targets in the most intimidating interior areas. Also, Unmanned Aerial Vehicles, because of no human endurance, they can hang around over targets for longer periods than can a piloted plane. It is good for the army personnel whose lives are saved because they need not to go at such adverse places and pre programmed drones are beautifully set to target the enemy. Where there is an existence of pleasure and happiness and no place for pain is considered as good. This we called as utility. An act that maximizes one’s utility is the one that maximizes total benefits while reducing bad consequences for large masses of people in the world. In utilitarianism, we call it more happiness rule. Happiness increases when total utility is increased and this is possible only when action is morally good. When one is happy due to some act, that act is moral.

Deontology denotes an obligation or duty. It is considered as normative ethical situation that determines whether action is moral or not depending on the act’s adherence to the rule. It is considered as duty or obligation because rules bind us to our duty. It focuses on the correctness or incorrectness of actions and not the outcomes. A circumstance is good or bad depends upon the action which brought it, whether it is right or wrong. We are confronted with ethical dilemma when we come across to take a decision to kill people and the impact that killing has on the families and societies. This requires not only legal but also ethical accountability and responsibility from another person. Many times it happens that wrong programming leads to the killing of wrong people. But this does not lead to removing of Unmanned Aerial Vehicles and other such types of weapons. We all know that military personnel do not want to kill. But they kill not because they hate the enemy but because of their duty and obligation to their country and their profession. We come across certain situations where there are clashes between the duties, and a choice is to be made where one duty may be superior over another, although there are no hard and fast rules available.Social Contact: Social contract is an implied agreement among the people to cooperate for maximum social advantage, for instance sacrificing or leaving some individual liberty for state security.

Character: Character is an attribute or quality which is an suggestive of the nature of an organism. Also in genetics it is considered an observable property of a human being that is under genetic control. Sometimes it is also called a trait. In few situations evidence in belittling of character is permissible, not in order to establish or refute the commission of a specific typesof information, but with a view to damages. Drones represent threats to general public and to their property, even in ordinary operation, but particularly when any defect occur in machine or in the data communications on which they are greatly dependent. There are few usual controls are available over unsuitable behaviour of drone. Laws of general liability are in force to provide remedial measures for the injury and harm caused due to bad behaviour of the drones. Air safety rules and regulations apply to drones.

Australian Computer Society’s (ACS) code of ethics: In order to maintain and advance the admiration, dignity and efficacy of the profession in the task of information technology, and in maintaining with high principles and standards of proficiency and ethical conduct, the professional person will be honest, straightforward and unbiased, and will work and serve with loyalty bosses, clients and the public at large, and will endeavour to add to the competence and reputation of the profession, and will use unique knowledge and talent for the development of human welfare. The Australian Computer Society agreed that the standards are ideal, and all of them may be not achievable always in all situations. While in practice, a member may infrequently come across a situation where some standards conflict with another, which includes standards from other sources. When such situation appears, the member must consider the relevant factors and decide to choose an act in such a manner which is most appropriate with the Codes of Ethics, given the circumstances of the case. It is very hard to set totally objective standards about ethical conduct, and this Standard does not make an effort to do so. The explanation of ethical and unethical deeds and behaviour requires some constituent of prejudice and subjectivity. A member of the society is hoped to take into consideration the character and spirit of the entire Code of ethics in order to solve vague and ambiguous or controversial issues concerning ethical conduct. It can be said that a member of the society is expected to act in a manner likely to be judged by knowledgeable peers in control of all of the material facts as the most ethical way to act in the situation. So, drones should be constructed and used in a manner that it should not harm the general public and its property. Code of ethics should be taken into account while preparing the drone to strike at the battlefield.

The increase use of drones raises a lot of privacy and civil liberty issues to think about that go beyond the legal issues of privacy incursion. These involve ethical concerns related to the building and maintenance of trust between the public and the users of drones. The operators of drones and especially the country operating the drone must consider the outcome of the strikes of the drone.