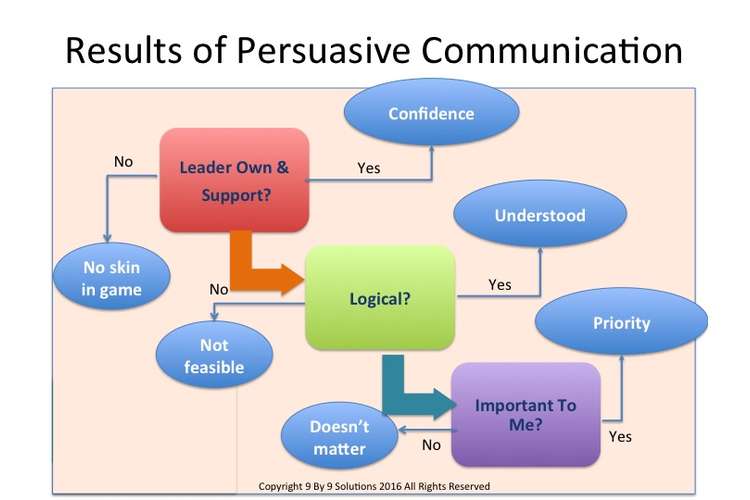 An example of persuasive communication in the personal context would be a social media post. For instance, if the parent of a schoolchild puts up a social media post highlighting the need for sidewalks near the school so as to ensure safety for his or her kids, it would classify as a personal persuasive communication. The intended audience in this case would be the school authorities who would be contacted using social media. Most schools today have some kind of online presence and consider social media to be one of the most effective means of communication. Posting about the issue on social media would further garner the support of the other parents, who would be persuaded to join the movement. The social media post would have to highlight the issue, the dangers associated, attractive and eye catching visuals, how introducing sidewalks would address safety concerns and what the school authorities could do to help the situation (Kernbach, Eppler & Bresciani, 2015).

In the professional context, an instance of persuasive communication would include an email to one’s superior highlighting some issue in the workplace (Pearson, 2017). For instance, if an employee has observed certain inter-team conflicts owing to cultural differences or the lack of safety measures in the workplace, he or she would have to take the issue up with the management. In professional spheres, formal means of communication are usually used for persuasion, and hence, the chosen means of communication in this case is email. A formal email would have to be composed and sent to the boss, so as to highlight the concerned issue. The email must mention the subject that the employee wishes to discuss and a detailed analysis that would help the supervisor understand and gain better insight. Moreover, the email should also state why the changes need to be introduced and the potential solutions for the same; this would be effective when it comes to persuading the supervisors.

In the academic context, a persuasive essay may be written about the community’s need for a night patrol program. Such an essay would have the members of the community as the intended audience and would contain all essential details about the issue. It would state why night patrol is necessary in a community and how such a program would benefit the community as a whole. An essay would be used as the medium, using clear, precise and concise language on the issue concerned (Petty & Wegener, 2014). This would help in conveying the message effectively to those concerned.

To conclude, it can be said that persuasive communication in any context would have to be all encompassing and consist of the details of the concerned issue, proposed solutions and the benefits it would offer; this is bound to grab the attention of the intended audience and even convince them.