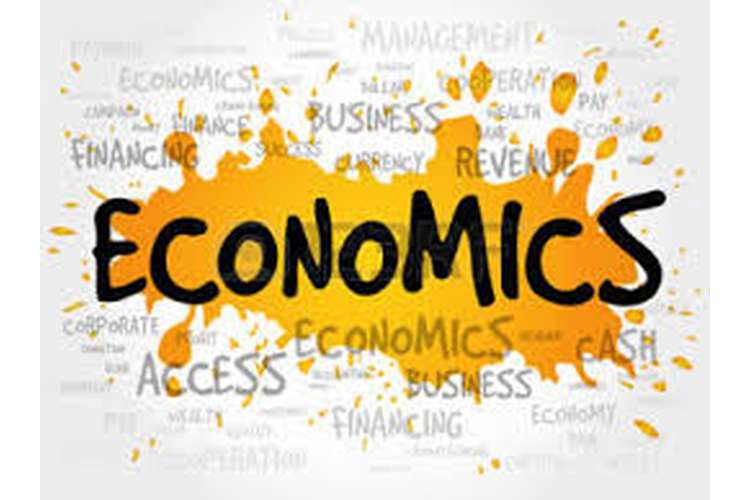 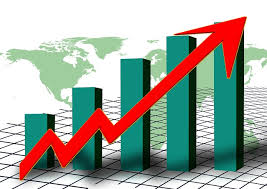 Fiscal Policy: Fiscal policy is a tool used by government for adjustment of its spending levels against the prevalent tax rate to monitor and influence country’s economy (Asaju, Adagba  & Kajang, 2014). Government officials coordinate their fiscal policy with monetary policy of central bank. Government can adopt and follows the fiscal policy in two ways:

Fiscal Policy plays very important and vital role in the economic growth and development of any country. Budget, taxation, public spending and public debts are the instrument of fiscal policy. Budget and taxation help government in controlling expenditure in economy and maintain sustainable development of it (Asaju,  Adagba & Kajang, 2014). Fiscal policies play a significant role in economic growth in following manner: 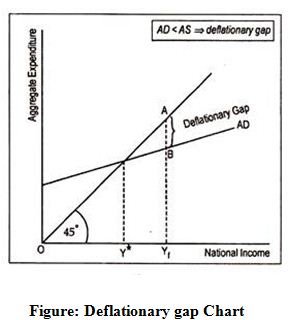 Thus, government adopt and follows fiscal policy for attaining objectives of continued supply of public goods for the welfare of society and stabilise fluctuation faced by economy time to time. Expansionary and contractionary approaches are used by government for sustainable and stabilise growth of the economy of country. 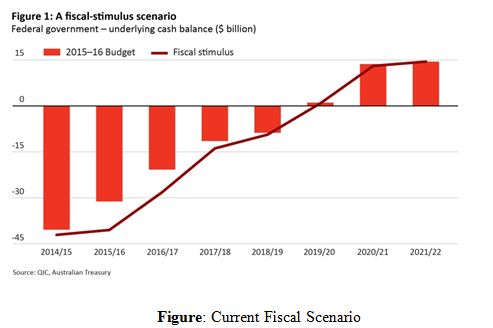 Currently Australian economy facing budget deficit but it is in good position in comparison to previous years.

GDP rate of Australia:Budgeted GDP was 2.8 per cent and Australia reached nearby the level of Budgeted GDP it is growing to 2.75 % in year 2016-17 (Australian Government, 2016). 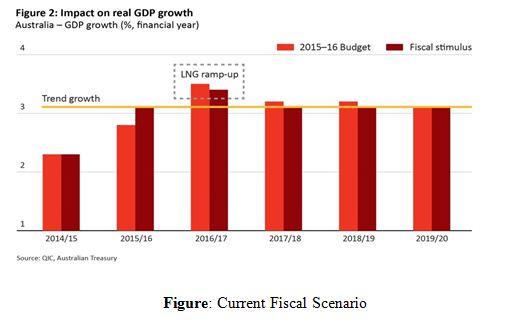 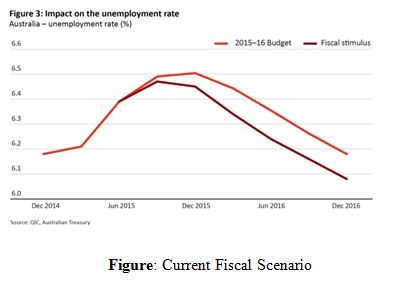 Along with business government provide cuts for health care organisations and also going to include high earner families into the middle-income tax bracket. The federal government is focusing on job employment opportunities and growth and control its spending to remove deficit from the economy. Government is also provided additional funding to department related with defence for countermeasure terrors.

Presently economy of Australia is facing budget deficit and but it is expected by government that there will boom in Australia’s economy and they will be in surplus position. To improve the economic position Australian government take some major changes to bring the economy in surplus. These are as follows:

1. The main focus of federal government is job creation and economy growth.

2. Government revised tax rates for small and middle size business from 28.5% to 27.5 %, to which will increase the consumption level of such businesses and create job opportunities for individuals. Such tax cuts help in improving the money supply in the economy and decrease in unemployment rate. Ultimately cash flow in the economy will improve and which help government to return the budget from deficit to surplus by 2020-21.

3. To put control on spending level government does not make any new announcement related to infrastructure. 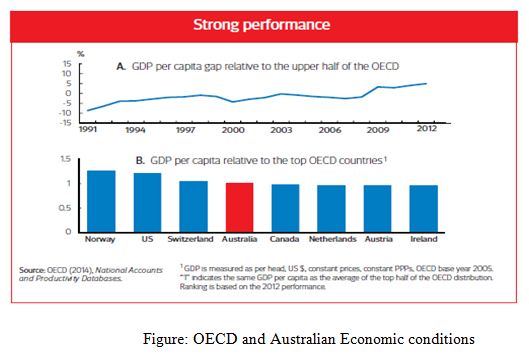 Australia is one of the member countries of OECD. OECD’s countries economy and Australia economy was facing problem of financial crisis in the year 2008-09 , affect of same is still reflected in the country's economy. Currently, Australia is facing budget deficit in its economy which is sign of slow economic growth. Economy of Australia is better than the average economic condition of OECD's countries. Still, Australia is facing problem but government of Australia issued some structural reforms in many areas of economy. Australia is in improved condition than the other country after the recession faced by the global economy, the reason behind this is that Australia expands its area geographically and mobilised its resources and make good investment and trade relation with other countries in Asia. It can be considered that economic policies of Australia are stronger and appropriate in comparison to the Economic policies adopted by OECD country.

There are factors which are responsible for budget deficit and its continuous deterioration. These factors are as follows:

Increase in unemployment rate:In the  mid -year Unemployment rate in Australia was reach up to the mark of 6%.The reason is fewer job opportunities available in the economy for the individuals. When there is no availability of job in the economy movement of money becomes slow. Slow movement will decrease the consumption or demand of money in the economy which ultimately affects the economic growth rate or GDP rate of the country. When GDP is not growing economy will face budget deficit.

Heavy tax rates: Federal government of Australia imposes heavy tax burdens on middle and small business houses. Due to heavy tax rates, business cannot grow in the economy and earn lower profit. Lower growth rate will affect the economic growth. Government could not provide assistance for the development of these business houses. Heavy tax rates restrict the growth of small business and could not provide create job opportunities and earn low-profit level which ultimately affects the revenue of government and budget deficit take place.

Excessive spending:Australian Government spend more in infrastructure project then the revenue available to them. Excess spending will arise situation of budget deficit in the economy of country.

For systematic and structured economic growth government of Australia makes changes in its spending level. Government of Australia put offset their spending with some saving measures. Government decided to give tax rate reduction for middle and small business which creates job opportunities and growth opportunities for business organisation. It ultimately affects the revenue of government but brings some economic growth in the country. Rather cutting or offset spending level government prefer and adopt some savings measures which are as follows:

1. Save $2 Billion which are wrongly claimed by people for welfare purpose.

3. Government put limit on subsidies provided for childcare to those families who are earning $2,50,000 or more.

These all measures proved that Australian government adopt fewer cuts in their spending and put changes in their funding plans which help in improvising budget deficit which is very clear and good move with respect to economic growth.

Leading indicators:It influence the economy of country prior adjustments and help in predict future trend of the country.

Lagging Indicators:It indicates economic performance of the country and changes in these identified after establishment or adjustment of trend in the economy of country.

GDP rate: Australia’s economy is slowing down. The estimated GDP growth rate is 2.6 %, in reality; it is 2.5 % which is very low. Which is quite higher than forecasts made by economist.  Such growth rate is showing that Australian economy is not in good state. 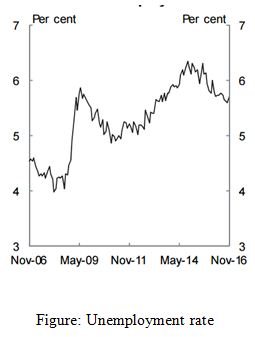 Consumer Price Index (CPI): Consumer price index is a statistical estimate which is used to measure change the price level of consumer goods available in the market. 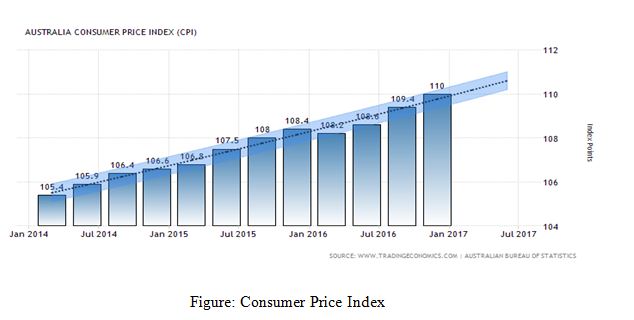 The above graph shows that Australia’s CPI is continuously rising which shows there is inflation in the market and cost of consumer goods and services increases. The CPI of Australia can be increased in the year 2017 which may bring budget deficit in worse situation (Mahmoud, 2015).

To improve the economy of  country government of Australia need to improve its spending and taxation arrangements. Government put limits or exercise control on its spending level and provide support for the welfare of society where it needed. Government starts spending in job creation sector and put control on unemployment rate.

Factors that might have worsened the severity of deficit:

According to the MYEFO budget deficit of Australia will raise $23.8 billion in the year 2017 and become reached severity level. Generally, budget deficit is related to generation of revenue of government through taxation. Budget deficit incurred when government receives slow tax revenue from economy. The main reason for increasing budget deficit in Australia is expansionary fiscal policy. Under this fiscal policy, government starts spending funds for development and welfare of society or cut taxes of individuals. But there are certain other factors which may lead to the fiscal deficit. These factors are as follows:

Tax evasion:Tax avoidance is not a crime but tax evasion is an illegal practice which affects the government revenue. It might be possible that in Australia many taxpayers may evade tax duties which affect the level of revenue of Australia.

Financial assistance: Government provides assistance or excessive financial support for the development of various sectors and its spending become more than its earning will raise the situation of severe budget deficit.

Excessive spending for social welfare: Government starts spending excessively for its fast growing aged population in the form of pension which can be a cause of budget deficit.

Thus in the context of Australia budget may go into deficit and reach at its severe level because of excessive funding and financial support to society and less earning income from taxation.

Increase in government Expenditure: During the time of recession, government increases its level of expenditure in developing infrastructure of the country. it spends its funds in public works like building roads, ports, telecommunication links, defence, social welfare etc. These spending have direct and indirect effect on the economy.

Decrease in Government expenditure: overcome the situation of inflation and budget deficit government will decrease their expenditures or spending level in the economy which put limit on consumption and disposal of income of individuals and society. Decrease in government spending will decline the level of national income and reduce the effect of inflation.

Increase in Taxes:Government increase the tax rates and impose heavy duties on businesses which ultimately reduce the profit margin and income level of individuals. Lower income level will decrease consumption level and aggregate demand of consumer goods will also decrease prices of goods come down and inflation can be removed from the economy (Gemmell & Au, 2012).

1. Unable to identify the actual amount or level of revenues or expenditures which may take place in the economy because these all are flexible, not structured. Effectiveness of fiscal policy measure depends on their correct timings (Kakar, 2011).

4. Success of fiscal policy measures depends upon economic and psychological reaction of people for these measures.

Thus, Fiscal policy has some strength which contributes to stable and sustainable growth of economy but it has some limitations which affect the success level of fiscal policy measures (Kakar, 2011).

Makin,T., 2016, “The effectiveness of federal fiscal policy: a review”, Commonwealth of Australia, page 1-27.

Murrja, A. , Ndregjoni, A. & Cerpja, T., 2014, “Causes of the growth of public debt and budget deficit in albania: report based on raport rule of maastricht (60/3 of gnp) - recommendations for reducing these parameters”, European Scientific Journal, vol.10, pages 507-518.