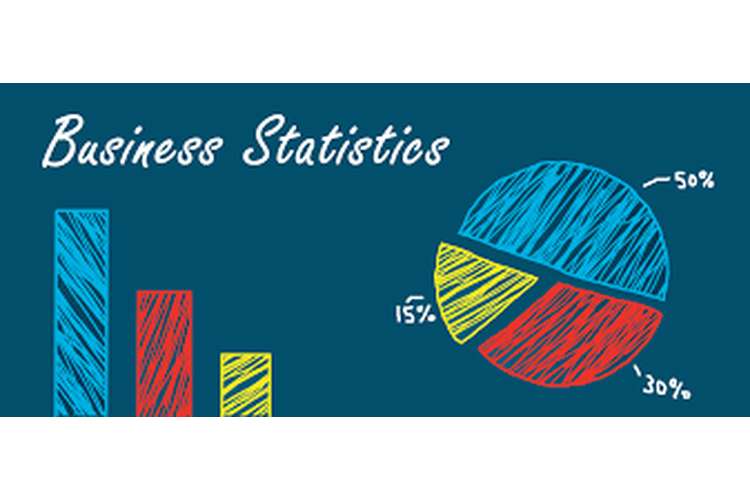 This analysis tells that average gross revenue is 65.92. the standard deviation of this distribution is large so we can say that there is more fluctuation in the data.

The data of theatres shows that the average value is 3003 and the standard deviation is 1033. It is negatively skewed data from skewness measure which is -0.234. 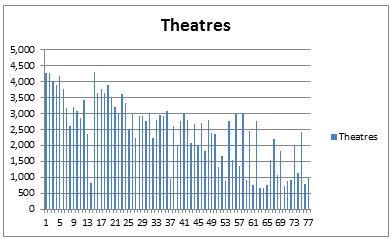 Box-and-whisker plot for the distribution of the gross revenue:

Correlation between a rating of a film and the revenue

They are positively correlated so we can say that both the data is in the same direction. If one is increasing then another will also increase.

The regression line found In the previous examples tells the relationship between Y Gross Revenue in Millions of US$ and X Number of theatres. P value in this test is equal to 5.71E-11. This less than 0.05 so we can say that we need to accept the null hypothesis. The intercept of the coefficient is -93.6278 and the standard error in this 75.2322.

The regression line in above case can be written as

It is a relationship between Gross Revenue in Millions of US$ and other variables. The gross revenue can be predicted from the number of theaters and other variables. The intercept part is -159.867. it is negative so we can say that in the case where all variables are 0 then it shows the negative gross income so there is a loss in this business. The coefficient of last variable is 0 , it means that it does not affect the gross income.

Since p value is less than 0.05 in all cases except X3, X4, X5 so we can say that overall modal satisfying the required significance except these variables.

There are eight independent variables which effect the gross revenue in this regression modal but since the coefficient of X8 is 0 so we can say that except thriller all other factors effects the gross profit.

It is given that 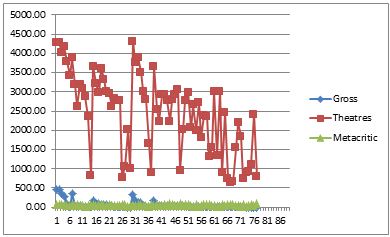