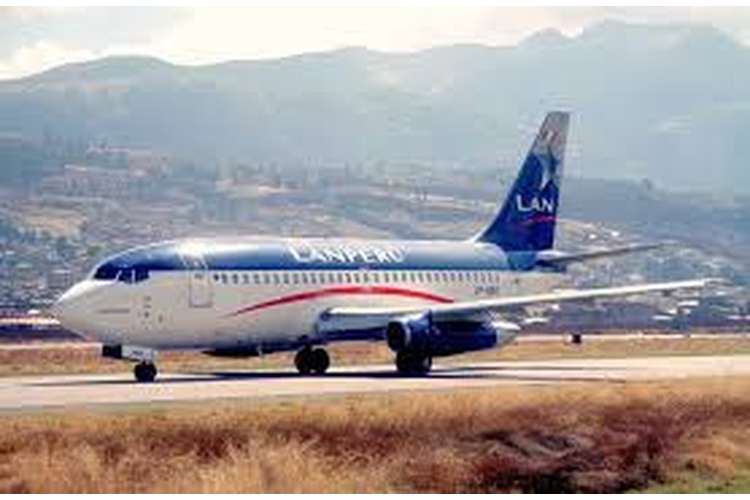 Before starting any business it is very important for an organization to analysis market with the help of proper market segmentation and also designed strategies to decide upon whether to focuses on particular segments or mass market. The study is mainly concentrates on the survival and success  of new low cost  operators in  the  Australian aviation industry, the competition is very tough because operators like Qantas, Tiger, etc. have already developed their business and are considered as the leading operators. Hence this study is mainly aims to describe the various ways for market segmentation to develop new internal airline planning operation by analysing the industry in Australia (Data monitor, 2011). 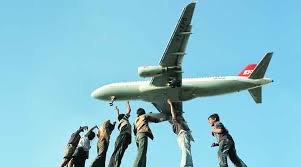 In the past few years, recession is observed in Australian economy which also affected the aviation industry in the country. With rise in the aviation fuel costs, Australian domestic airlines industry has suffered a lot due to trend of price competition in the airline industry.In addition, due to recessionary trends in Australia’s economy and overall decline in international airfares, this enables the travellers to book international travel plans instead of travelling domestically. All this led to huge disturbance in the business of domestic airlines. Domestic Airline companies like Virgin and Qantas had cut down the prices to attract the flyers which results in price competition in the industry. Domestic Airlines industries mainlyinvolved in the transportation of passengers between the main cities or to regional destinations and also generate small portion of revenue through freight transport (Annual Report, 2015).

Segmentation is a process of dividing large units into small units which have related or similar characteristics. Marketing segmentation refers to divide the complete market into various subdivisions which comprises of group of people or customer who think on the same line and should have identical interest. Market segmentation strategies are generally used by the marketers to identify particular segments of markets or mass market in order to reach the meet customers to meet specific wants and needs and develop strategies to achieve certain marketing objectives of those particular segments (Rieple, 2008). On the basis of socio-demographic features of flyers and trip attributes the Australian aviation industry can be divided into following segments:

The customers who give less importance to destinations and flights schedule and are more concerned about the prices will be included in this segment. It is a class of customers who are young and prefers low budget accommodation and try to cover maximum destinations in time period of around 10 days. The customers who included in this segment are not frequent travellers and may not book tickets in advance and are independent travellers who prefer internet for the bookings.

The customers who concentrates mainly on the tour packages and give less preference to price and concerned more about the items involved in tour and type of destinations. This segment is also comprised of young tourists but the major part is covered by the senior citizens who are experienced travellers and generally focused on quality of accommodation and their purpose may be vacations, visiting familiars, educational, etc. Therefore they did all things in organized manner to enjoy their outgoings (Annual Report, 2015).

These are the high profile customers who usually prefer luxury and comfort and mostly concerned about the facilities given by aviation industry. Thus price is not the issue for these customers, while choosing a flight operator they mainly think about the services and facilities provided by the operator. They are elite customers and planned all the things in organized manner. They prefer luxurious hotels and resorts and high class services and their purpose may be business tour or holidays. They are quite regular airline travelers and are highly brand loyal to specific airlines wherever possible (Kitney, 2014).

Here the customers are average travellers who are not too much serious about the prices and also expect good services. But they think about price while making decision of travelling. For educational tours they generally preferred rental homes because they need to stay for longer durations.

Segmentation of flyers in the aviation industry can also be done on the basis of their earnings which are as follows:

Middle income groups -  They are moderate customers who concerned about both price and services.

The new airline operator which are planning to grow and develop  their business in Australia at domestic level will be less benefitted by this bifurcation.  Earlier it is mentioned that there is price competition between the  opreators like Qantas and Virgin airlines due to decrease in the demand of Australian domestic flights. Therefore demographic segmentation of customers on the basis market response   is useful  to understand the price competition and other strategies used by operators like Tiger, Qantas and Virgin airlines.Australian domestic industry providing services in cities or other regional destinations so the price is an significant factor for the customers but also there are customers who are less sensitive to prices. bytaking all this iisue into consideration the segmentation of customers can be on the basis of socio- demographic characteristics and trip attributes as:

Twelve airlines were giving their services in Australia as per the reports of Datamonitor in the year 2011. As shown in the below graph, in Australia the Qantas is the number one domestic airline which is follwed by Virgin airlines. 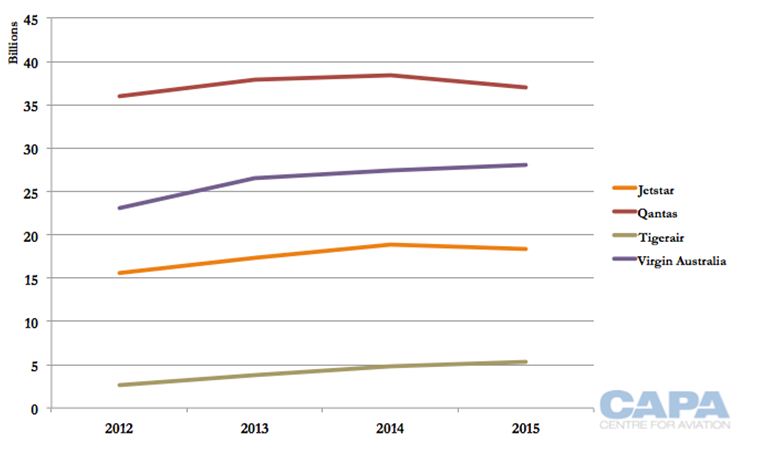 The above figure shows the growth of operators  in the aviation industry on  the basis of market shares and revenues (Australia domestic airline market outlook, 2015).

1. Qantas airways  is third oldest airline in the world and in terms of revenue it  comes at 13thpositon worlwide. It is also the oldest airline in Australia and is famous for providing world class services to the customers.

3. Jetstar Airlines is famous for low fares and providing flights as low as 9$ (Jansson, 2011).

The Australian aviation industry is majorly dominated by Qantas and Virgin over a decade and there were no major international operators in industry at that timelike Emirates, but now most of the flyers wish to travel with them which also affect the business of Qantas and Virgin. It is reported thatthe future of the Australian aviation industry is very bright and   international operators like Easy Jet, Ryan air Ltd., Air Berlin, etc.are dominating the domestic budget markets.

With the increase in the price of aviation fuel, the Flyers could choose to travel in the fast rails while travelling from Melbourne to Sydney through Canberra. As it is considered as one of the busiest business routes and also the international Arabian giants like Emirates also planning to enter the low cost or budget segment of the airline industry. Although Qantas have already provided world class services but nowadays as the facilities are increases and also because of price competition the customers have wide variety of choice (Reid, 2013).

As it is observed that the aviation industry in Australia attracting the eye of international giants but the competition is very tough because of fierce price competition and the customers also have number of choices. In Australia Qantas and Virgin are the leading operators in aviation industry but the entry of international Airlines in the budget domestic airlines segment like Emirates, the market of local operators are affected. The segmentation in the study is done on the basis of preferences and user demographic factors.  Therefore the entry of new operators is very tough in the low cost airlines segment and they should think twice before making their presence in the industry.