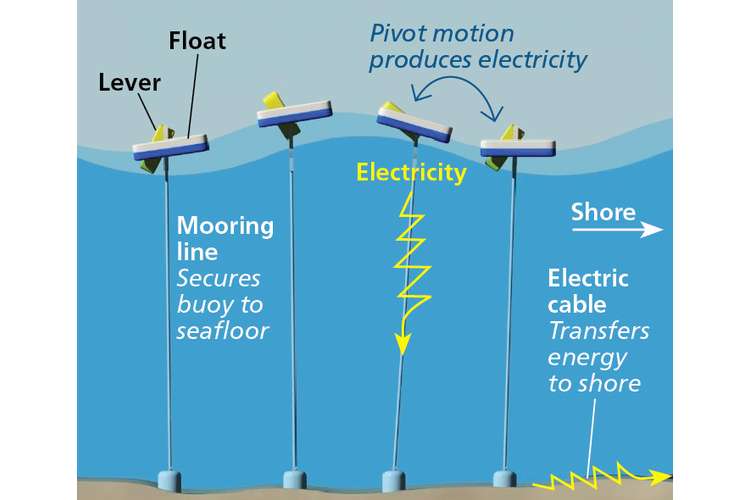 SNL-SWAN Simulated attenuation of significant wave height in the lee of the array of CETO WECs (represented by circles) at the Garden Island site. Triangles represent measurement sites in the field program.

The assessment of the wave energy resources was revised in the context of prior estimates of resources which did not capture the spatial distribution of the resources of Australia.

The total available wave energy in Australia is an order of magnitude, is larger than 248 TW h electricity. It was generated in Australia in the year 2013-2014. It further indicates that the magnitude of wave resources does not restrict its future uptake.

The studies reflect that the southern coastline of Australia comprises a great wave resource. In the year 2005-2006, Australia had generated about 254 TW h/yr of electrical energy from the total capacity of 50GW. 75% of the electricity generation was from coal. The resources of wave energy along the southern coast of Australia which is 146 GW is three times the total installed capacity of the country (Devine-Wright, 2014).

It has been found that 10% of the incident wave energy can satisfy around 1/2 of electricity needs of Australia. The nearshore wave energy resource map explains that the resource is approximately 30% -50% lesser as compared to the estimates of the World Energy Council for Southern Australia. In the area of Australian National Electricity Grid , the resource of wave energy is essentially spatially same (AORES, 2018).

The Government of Australia is required to produce 45000GW h/ yr of additional renewable energy prior to 2020. The aggregate renewable energy quota can be accomplished if 10% of the energy which is available over a section of 100 km of the coast of Southern Australia is transformed into electricity (Eco generation, 2018).

Furthermore, the limitations of this study pertain to the limitation of the knowledge of resources comprising of the temporal and spatial variability along with its spectral characteristics. The difficulty has also been confronted regarding the access of spatial data and identification of multiple designated marine management regimes of the marine territory of Australia. Lastly, there is also a limited evidence base and methods for the purpose of accessing the impacts of extraction of wave energy on the marine and coastal atmosphere (ARENA, n.d.).