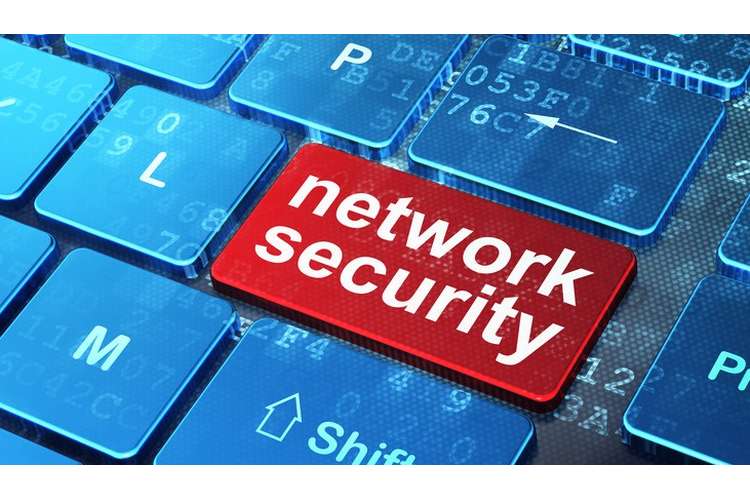 If we talk about the networkcommunication, it becomes the most important part of the human’s life in today’s time.Moreover, become the most important part of the business and industries. All have become dependent upon the network or internet for every small work. For the communication with the use of the internet, the user has to require the use of the IPv4 address and it has exhaustion.With that, the network comes under the attacks of the hackers and new threads are arise into the system.(Ellingwood,  2014)With the attacks, the important data and information are lost or comes under the control of the hacker. The internet services are open to everyone into the world. With the open network, it is easy to hack and attack the network.(Craft, 2011).Moreover, for the security of the system, there is various type of solution have found and the major solution is a firewall. This method is used to reduce the traffic onsever and provide the required traffic only to the server. If we talk about the firewall, it is available for both hardware and software.Moreover, if we compare both then the hardware one I the strongest tool as compare to the software. Because with the use of the hardware device it provides the more strength to the device as compared to the software tool. Some other factors are also available into the which affect the performance of the tool. Both in today’stime, many industries are using the software to protect the network for the use of the unauthorized use of the system (Brown,2014)

All above is the scenario of the internet services and their uses. Now the other solution to protect the network, the user can use the iptables, this tool has mostly used into the Linux system. Many features that are available on the firewall have also provided by this iptables, and other than this some features, which have not supported by this because of the support system that have used with this iptables. It is something related to theuser to configure the list of tables into the systems. After creating the tables now the tables are added to the configuration of the system and then start the use of the system as the filtering the system or the network access according to the rules provided by the Linux system. It can be used for both IPv6 and IPv4 systems and it can be configured and change the setting according to the to the network requirement.

In the report,the details about the iptables, configuration and how this can be implemented to the system and other than this use the various references of the journals and research papers are describedin the report.(Omin, 2017)

This part of the report deals with the various researched were done for the tables and various result and other information which are described in the research papers and journals.

1. Refer to the journal “Implementing iptables using a programmable stateful data plane abstraction” written by the Luca Petrucci. It provides the details about the type of the how the iptables have to implement the system with the use of the programmable data. Different type of tools are used for that are also mentioned in the journal. Other than this in the last, it provides the details about the future work, which can be done over the iptables (Petrucci, 2017)

4. Refers to the journal “Design and Development of a Framework to mitigate DoS/DDoS Attacks Using Iptables Firewall” it also deals with the DDoS attacks and the DoS attacks by the hacker to get the information of the user.To overcome with the attacks iptables used as a firewall system to protect the user device from the attacks. It provides the details of the designing part of the framework of the system (Chatterjee, 2013)

After reading all the research papers and journals that are described above, various type of the functionality of the iptables and methods, whichhave used to implement this system are described.

The above written is the command, which is related to the iptables and this,cannotbe understood by the normal person by just reading the commands, so this command is described below:

After reading, the examples now consider the main rules and the techniques that are used to define the iptables.
1. POSTROUTING

The below shown the figure related to the packet traverse system which was present into the network security address, translation scenario.In addition, this can be used as the system for the table nat. 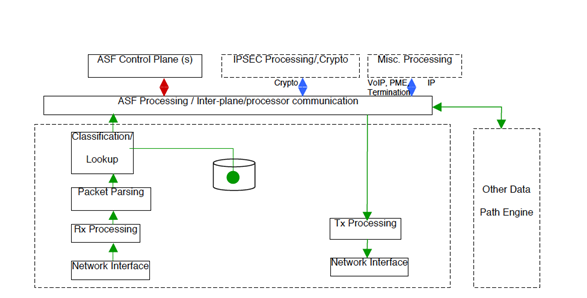 After that now filtering the packet. The below image shows the process of the filtering the iptables with the use of the hook point. 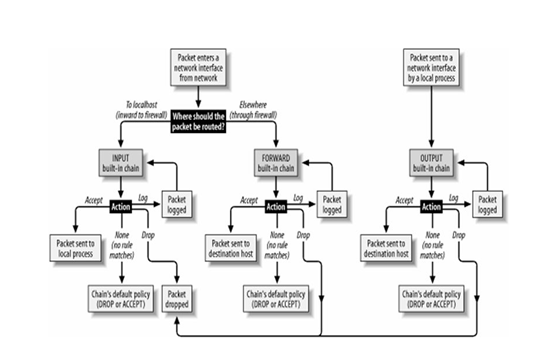 After that, the below image shows the mangling process for the packet processing into the system. 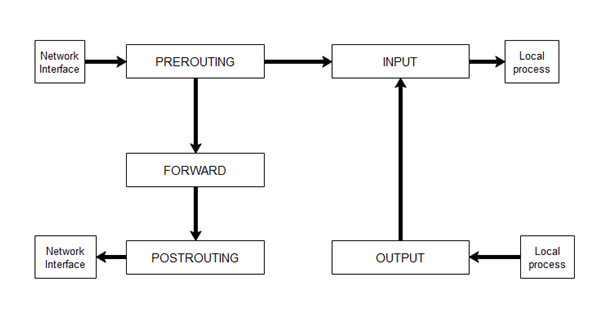 Refer to the hook point it is the most important thing into the iptables. Because it is used to decide the behavior of the rules into the table. It also sued to decide and separate the processing part of the iptables. Different types of rules are available for which for configure the table and the systems. Some rules are used to blocking the traffic and some used for forwarding the traffic. For that, the tables arecreated to decide the work for the rules. In the below tables, different hooks points are defined along with the work for that packet.

Tables that have used into theiptables:

In the above part of the report, provide the details of the hook points thatare used in each configuration for the iptables.Alternatively, command line that is used to define the different tools. Other than this the iptables have three different type of built-in tables, all the tables are used to process all the function that provided by the packets. Different type of tables are listed below:

The above tables are followed some pre-defined hook points that are used to configure the iptables. In the below table provide the details of the all the tables.

Other than this, now let us see different types of chains that are available into the system. As we consider the chain system, it is the most necessary part into the iptables.Some type of the chains has followed each of the tables that are present into the iptables.These chains are empty for some or all the hook points, the hook points are the predefines points that are described in the above tables. After getting the default chain, now the user can create the other chains with the use these chains for the iptables. The main use of the chain system is that to find out the real working of the IP address and the path, which followed by the system for the iptables. It is used to find out the verifying process of the chains that are present in the system of iptables. There are total two different types of the process available for the chains which have to follow the system these are the DROP and ACCEPT. For the use of the system, the build in theset as the by default accept the argument present into the system. All the other police that are made by the user is the complex in nature and it has the predefined keys have to return and after that, no further changes are available into the system.

This part of the report deals with the methods and others factors that affect the system, it is the cost-efficient method and it can be easily developed into the systems, and the run over the internet serves. This iptables are provided the various system applications tools. Working of the iptables depends upon the operating systems. Woking of this effect over the different operating systems.

The location of iptables depends upon the application that is using to configure the iptables into the systems. The below image showsone of the examples of the iptables installation of the firewall. 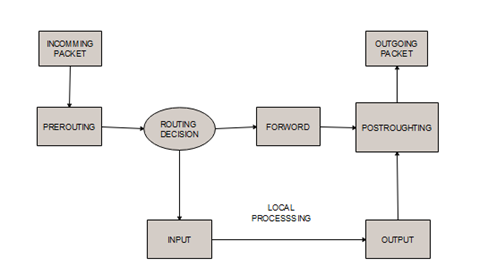 2. After this process is completed, the packet goes into the routing decision, at that part the decision is taken for considering the details, which are present in the packet. After this the input chain does the next process, this process is only done if there is same IP address present into the IP packets and the local address. After matching the IP address now the packet is transferred forward into the local machine to process the other part as per written into the packet. All the outputs and the other process in the ends go with the help of output chain.

3. Take the condition if the packet is not reached to the destination, at that time the forward chain rule is followed. This is the process sued to check all the packets one by oneafter that put the packet into the required place. After that, the packet will be dropped if the transferring of the machine is not allowed.

4. The output part of the report deals with the crossing the packets which is related to the machines. These are all the packets that are used to replay any kind of query that was generated by the machine itself. After that, all the packets are checked by when the process of the actual IP packet is converted. With this, the packet is reached to the correct order and place.

5. The POSTROUTHING chain is used to check the outgoing packets from the system. Nat is the main function used into this chain system after following all the rules. Other than this it will use for hiding the source.

11. Jithin. 2017, what is iptables? How to manage iptables? Viewed on 23 October 2017, https://www.interserver.net/tips/kb/iptables-manage-iptables/