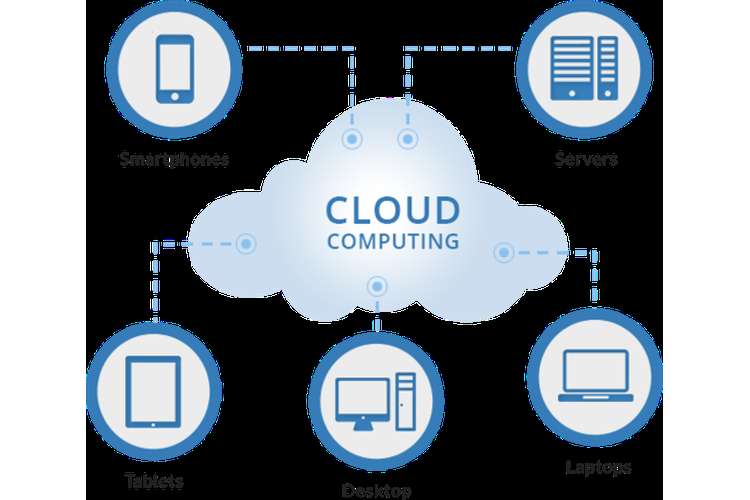 According to Beimborn, et. al. (2011), “Platform as a Service” (PaaS) is one of the types of cloud computing services. This provides the platform to the customers so that development and running of the operations can be done without any complexity of developing the infrastructure for the applications. There are two ways the services of the PaaS can be taken into account. One is through the public cloud service in which provider provides various networks and database to the application of consumer. And the other way is through the private services in which firewall is present in it.  There is excessive competition present in the market in relation to its services. This is the reason that the adequate cloud service provider is taken into account (Beimborn, et. al., 2011). This report is based on analysis of various cloud service provider and the services it provides to its customers. Other than that, a comparison and contrast in relation to it are also shown in the report.

Engine yard-Thisis thecompany that is basically designed for the web application developer by Ruby on Rails. This provides the advantage of cloud computing as the responsibility of the operational management adequately diminished. Some task such as managing the snapshots, performing the backup is done through the company. There is the availability of the both the private and public repositories of Git.

Red Hat OpenShift-This is the open sourceapplication which provides a wide variety of components, database, and the language. Some of the tasks are automated such as virtual server provisioning as well as scaling for the code management.  The feature of the web console is also available that provides the integrated development environment (Sullivan, 2014).

Google app engine-This is the company which is designed for distributing the application of the web and as well as the development of the Java. The infrastructure is managed as well as maintaining the runtime environment with the guarantee to scale.  Its prices range from the $ 0.80 / hour on demand made by the customers. The additional services cost can be applied adequately.

This Company supports various components such as Java, Scala, and the Node.js. This is the platform which provides the specialize feature called the Dynos which provides the abstract for the computing environment in an adequate and effective manner. This feature is highly used as there is the quick deployment of the and there is a wide range of distributed applications associated with it. Other than that, the Third Party Service i.e. add-ons are provided at this platform (Sullivan, 2014).

Heroku is the most suitable company that can be compared with the Bluemix. There are basically two such features which are taken into account for the further comparison such as:

Both the company support the programming languages such as Ruby, Java, Cloture, and Node.js. This help in better comparison so that better services of both the company can be taken into account effectively. 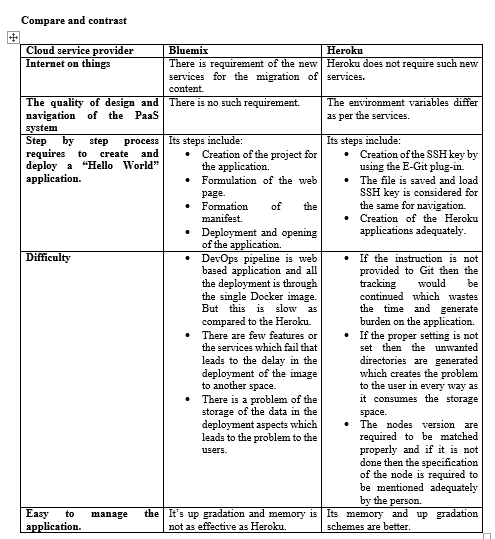 It refers to the interconnection of the various physical devices vehicles. These are considered as connected devices are considered and connected and smart devices are taken into account. For migrating the data the services provided by the Bluemix and the Heroku can be taken into account effectively both the area of working differed along with the process and the formality associated with it. In the Bluemix there is a requirement of new services for the migration of content and the data. On the other hand, there is no such requirement in the case of Heroku. If there is non-availability of the reuse or the comparable services than the previous Heroku add-on can easily be used (Kopetz, 2011).

Step by step process requires to create and deploy a “Hello World” application.

1.Creation of the project for the application- This is conducted through the IBM Bluemix DevOps Services. This is easily done by selecting the source control option by checking the Bluemix project box adequately.

2.Formulation of the web page- this is done by entering the codes so that web page is created properly.

3.Formation of the manifest- The web Ide feature is used to create the manifest so that deployment of the application can be done easily.

Heroku,conduct the same operation by various steps which are mentioned below-

1.Creation of the SSH key by using the E-Git plug-in.

2.The file is saved and load SSH key is considered for the same for navigation.

3.Then there is the creation of the Heroku applications adequately.

Such as DevOps pipeline is web based application and all the deployment is through the single Docker image. But this is slow as compared to the Heroku.

There are few features or the services which fail that leads to the delay in the deployment of the image to another space.

Other than that, there is a problem of the storage of the data in the deployment aspects which leads to the problem to the users (Kobylinski, et. al., 2014).

If the instruction is not provided to Git then the tracking would be continued which wastes the time and generate burden on the application (Middleton & Schneeman, 2013).

If the proper setting is not set then the unwanted directories are generated which creates the problem to the user in every way as it consumes the storage space.

The nodes version are required to be matched properly and if it is not done then the specification of the node is required to be mentioned adequately by the person (Middleton & Schneeman, 2013).

Heroku is a reliable platform where the application can be run easily and without any complications. This is a significant system or the platform for the deployment of the new applications. This is an application-centric approach and one of the most popular techniques in the current workflow. The troubleshooting expertise is one of the main features of the company which makes it differ from the others. The dynos enable in running the applications easily and without any default. The add-on features are significant along with the adequate storage space for storing the required data (Kemp & Gyger, 2013).

On the other hand, Bluemix is also one of the most popular platforms but still, it lacks certain features. These features include the non-availability of the adequate space for the storage which is necessary for the better running of the application. The Slack is available only through the build pack rather than already implementation of the same in the platform

Both the companies and their platforms are significant but by overall comparison, the better option is the Heroku. The Heroku is the more suitable for the running of the operation and using the PaaS adequately (Kemp & Gyger, 2013).

With the completion of this report, it can be concluded that cloud service provider is the significant approach which can be taken into account for the better customization of applications. In the current scenario, there is excessive competition and there is the availability of the various features which are provided by these companies to the users. All the companies are providing cost-cutting features in the tough competition. This is the reason that it is highly popular in the current terms. The Bluemix and the Heroku are the platform oriented companies of the service provider. Both the companies have features which attract a large number of users towards it. By comparing both the companies the more suitable platform is Heroku as it possesses more features and is more user-friendly.