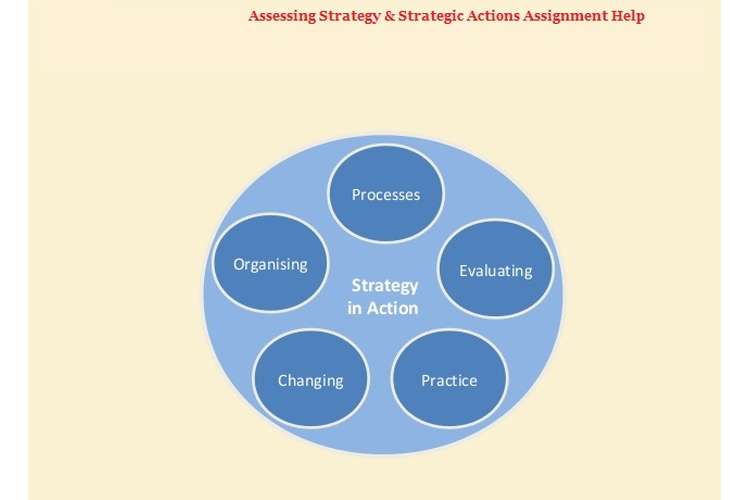 This assessing strategy & strategic actions assignment help elaborates the strategic dimensions and actions with their implications of an organization, Infosys. It is an Indian multinational company established in 1981 by seven engineers with only $250 and in the last three decades has become one of India’s biggest IT solution providers with a market capitalization of $30.8 billion in March’13 (Money Control, June 2013).

This phenomenal growth has been due to its brilliant business strategy and great focus on implementing the same. Infosys has followed the strategy of developing and maintaining business using its innovative ideas presented as its products and services. This Strategy has been modified over the period of time to suit the current business scenario and with the developments in the offerings of the competitors.

Thus, Infosys after analyzing all the pros and cons implemented its new business strategy based on all the developments in the industry in the last decade, called Infosys 3.0 Strategy (First Post, April 2013). This strategy has covered all aspects of growth and is presented in great details in this report.

Infosys was started with the aim of building and implementing great ideas that enhance lives through enterprise solutions and drives progress for clients.

“Responsibilities extend beyond the business” is the belief that is garnered at Infosys. This is the belief that led to the establishment of Infosys Foundations The vision statement of the company is:
"To be a globally respected corporation that provides best-of-breed business solutions, leveraging technology, delivered by best-in-class people."

Mission statement of the company is:
“"To achieve our objectives in an environment of fairness, honesty, and courtesy towards our clients, employees, vendors and society at large." 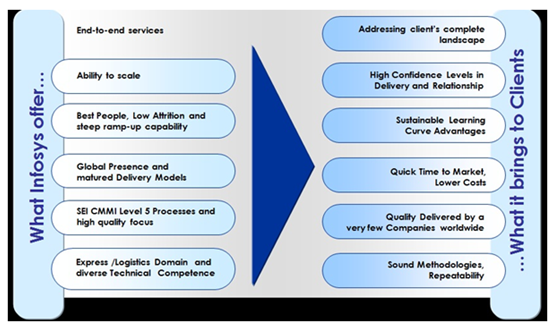 The values system of Infosys consists of:

Apart from these, there are four major initiatives taken from Infosys:

Infosys Foundations: In 1996, to support the underprivileged sections of the society, Infosys Foundations was established. Incorporated first in Karnataka, it was extended to Tamil Nadu, Andhra Pradesh, Maharashtra, Odisha and Punjab (Infosys Annual Report FY 2012-13).

Academic Entente: With an aim of exploring and establishing educational and co-creational opportunities with a number of national and international institutes, Academic Entente (AcE) was established as an arm of Infosys’ Global Academic Relation team. This collaboration was also extended on conferences, research, technological, globalization initiatives, etc. fronts (Infosys Annual Report FY 2012-13).

The culture of Infosys lies in the Spirit of Innovation and the continuous personal & professional development of its employees. The implementation methods of these are – Infosys Leadership Institutes & Training Programs.

To understand the strategic actions and its implications, first we should know the company’s position on all business parameters. The best way to do this is:

FY 12-13 was a low decibel year for Infosys. The total income increased by 17.6% and software export revenues increased by 17.8% over last year. North America with a contribution of 63.8% in the total income was the biggest market for Infosys followed by Europe contributing 21.8% of Income. Infosys had only 2.3% of its income from the domestic market and the remaining12.1% was from the rest of the world. The domestic revenues increased by 12.6% over last year (Infosys Annual Report FY 2012-13).

97.8% business was given by existing customers with only 235 new clients added to the portfolio in FY 12-13. This showcases the need to focus on new business acquisition and developing better Business Development team in the next fiscal year to atleast maintain, if not improve the standing of Infosys in the Indian IT Industry (Infosys Annual Report FY 2012-13).

The main highlights of the business strategy of Infosys are:

This is the Business Strategy of Infosys which has now been influenced by the competitions response to it. To understand this let’s look at the major competitors of Infosys:

In the Indian IT industry, TCS is the largest company in terms of market capitalization. It has a long list of acquired companies and has made a profit of 13.6% over prior year, which in absolutes is very high compared to Infosys.

Infosys and TCS have a lot in common in terms of business strategy. Both are trying to consolidate their offerings in terms of services products and services to become a business partner of their client rather than just a business solution provider. Also, both of these companies are the largest recruiters in India.

Wipro Limited
Wipro Limited was established 1945 and is another Indian multinational which started business in providing information technology (IT) consulting and outsourcing service in early 1980s company. Headquartered in Bangalore, Wipro has close to 145,000 employees present in 57 countries catering to over 900 clients (Wipro Annual Report FY 2012-13). It is the third largest IT services company in India and grew by 18.2% in last fiscal year (Wipro Annual Report FY 2012-13). Wipro has a very industry specific strategy for each vertical it serves and has deep knowledge of each function it caters to. Thus the strategy is to lead in some segments to acquire market share

Cognizant Technology Solutions Corporation
Established in 1994 and headquartered in New Jersey, Cognizant is an American multinational company. It specializes in information technology, business process outsourcing and consulting services. Due to its fast growth during the 2000s, Cognizant has become one of the Fortune 500 company in 2011 (Cognizant Annual Report FY 2012-13).

Cognizant Technology Solutions Corporation acquired 17 companies in the last twenty years to take the inorganic growth route to gain market share. The acquisitions were in different geographies and the strategy was to build business with the existing clients of these companies. Out of these 9 were American companies, 5 European and 3 Indian companies. Cognizant has grown by 20% in the last fiscal year, faster than Infosys and industry standards.

Thus, the top competitive firms in the Indian IT industry are trying to developing new business by being innovative and customer focused, align their products and services with the new technologies like big data and cloud, and grow inorganically by acquiring firms across the globe.

The renewed business strategy of Infosys is referred to as ‘Infosys 3.0 Strategy’. This strategy has the following directives (Infosys Annual Report FY 2012-13):

Apart from these, since Infosys ahs 98% of its business from existing clients, it has decided to expand the scope of its business with them by introducing new and innovative products and services, for which they have kept aside a sum of $100 million.

The global economy is gradually getting out of the slowdown and the business is again starting to develop. The IT and ITES sector in India has become the growth engine of India’s economy and is bound to grow at a high rate in the next fiscal year (NASSCOM Annual Report 2013). Thus, Infosys in light of these facts has decided to switch to Infosys 3.0 strategy to leverage the most out of this period of growth and business development.

Thus, Infosys 3.0 strategy focuses on maintaining business from its repeat clients, generating business from the existing clients by providing innovative and new services and products, developing new clients, acquiring firms in different geographies to expand its presence and take on the clientele increasing portfolio of services and invest in new technologies which would led to develop collaborated products and services, not just only IT solutions (Indian Brand Equity Foundation (IBEF) Report, August 2013).