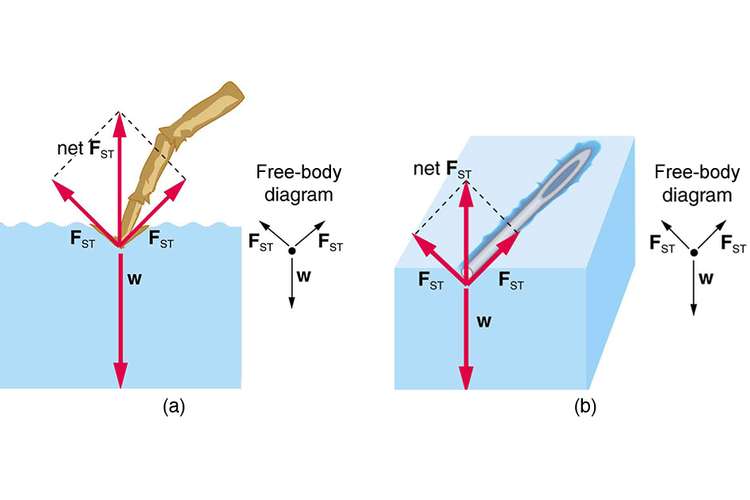 To understand surface phenomena in water and ethanol, we start by explaining what surface tension is and its applications in liquids. By definition, surface tension refers to attraction between molecules of a liquid1. A molecule within the liquid has equal and opposite attraction from other molecules while a molecule at the surface industry experience an equal amount of attraction since it is exposed to air as shown in figure 1. The forces between molecules in a liquid are referred to as cohesive forces. These forces are responsible for making the water molecules attracted to each other. This explains the formation of meniscus of various shapes in liquids depending on the difference in attractive forces on the surface molecules2. Molecules at the surface are attracted by other molecules below and those lateral to them. The surface therefore behaves like an elastic membrane. The phenomenon of surface tension is best illustrated when a needle is gently placed on the surface of water. The needle floats on water showing that there is a film holding it in position. The cohesive forces at the surface water are large as compared to inner forces within the water between its molecules.

Figure 1: attractive forces among the liquid. Forces acting on the molecules at the surface are unbalanced.

The SI unit for surface tension is dynes/cm. this can be expounded as the amount of forced in dynes which is required to break a film 1 cm long. Other units can be used too. These are N/m or J/cm. SI unit depends on the standard specification provided or used in a country. In some instances, the surface tension is expressed as amount of work done per unit area3. From these we can derive a formula to obtain surface tension as follows; 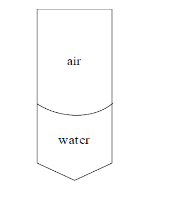 Ethanol has hydrogen bonding just like water but one side has a hydrocarbon. This means that the hydrogen bonding in ethanol molecules is not strongly attached as in the case of water molecules. This is illustrated below5. 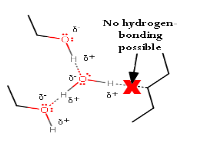 This insinuates that the molecules are not stuck close to each other well and are therefore easy to break apart6. Thus, the surface tension of ethanol is smaller than that of water. From this it is less difficult to rupture the surface of ethanol in comparison with surface of water. This is clearly described using the figure below. 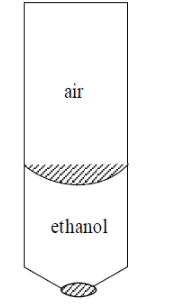 From the explanations above, surface tension is higher in water as compared to ethanol. This is the reason as to why water remains in the micropipette while for ethanol, a drop is formed at the bottom of the tip.