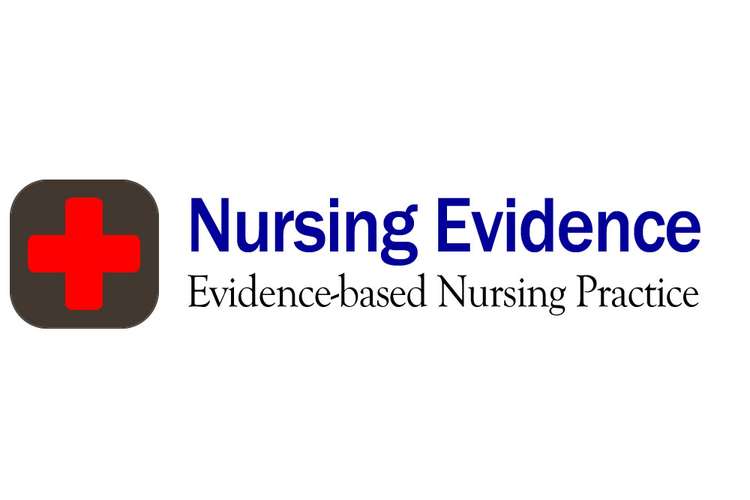 Research Question-What are the nurse’s knowledge and attitude towards pain assessment and management in emergency department?

The clinical nursing research is the research designed to guide the nursing practice and to improve the health and quality of nurse’s clients (Polit and Beck, 2009). The central aim of this research study is to evaluate the level of knowledge and attitudes regarding pain assessment and management of nurses working in an emergency department. The methodological approach is the overall plan to answer the research question by shaping a research design and influences, the method of data collection and data analysis. (Parahoo, 2006).The qualitative and the quantitative paradigms are the two predominant theoretical strategies that underpin the research methodologies. Quantitative research methodology is based on the theory that world is predictable and phenomena can be measured empirically (Gerrish and Lacey 2009).  According to Parahoo(2006) the quantitative approach arises from the belief that human phenomena and variables in human behavior can be studied objectively. Therefore, quantitative research is a formal approach characterized by the measurement of a phenomenon. Since this proposed study is interested in obtaining a level of knowledge and attitude of nurses working in an emergency department, aquantitative research methodology is advantageous in gaining a purposeful insight in to the level of knowledge of nurses. Moreoverquantitative research methods enable a researcher to manipulate numerical data to answer specific research questions and draw inferences from their findings (Schneider, Whitehead &Elliot, 2010).As the research question is based on the overall population of nurses, generalisation of findingsare required. According to Fitzpatrick and Kazer(2012)quantitative research is concerned with making generalisation from a study sample to a target population byestimating thequantitative value of selected characteristic of atarget population.Hence quantitative methodology is suitable to answer the research question of the proposed study.McNamara et al. (2012) and Lewthwaiteet al. (2011) have done quantitative studies examining the nurses’ knowledge regarding pain assessment and management.Quantitative methodology has thus been used successfullyto disclose knowledge of nurses while allowing generalisation.Soquantitative research is a systematic process of  gathering information measured by an instrument and statistically analysesthe information and converted to numerical data(Barbosi& Jackson 2011).In the proposed study ,the researcher will  gather information on knowledge on pain management of emergency nurses using a questionnaire ,analyses and convert in to a numerical data.

A non-experimental descriptive research design involving a survey is chosen for this study. According to LoBiondo-Wood and Haber (2010) when the researcher wants to create a picture of a phenomenon or explore events in a natural way of occurrence, a nonexperimental designis used.Polit and Beck (2010) stated that non experimental studies are conducted in situation where independent variables cannot be manipulated. So a non-experimental design is appropriate here because the purpose of the study is to establish the relationships among variables which are clearly defined andidentified. Therefore in the proposed study, nurses’ knowledge and attitudes regarding pain managementin the emergency department will be assessed andthere will be no attempt to control or manipulate the study situation.Gerrish and Lacey(2009) stated that descriptive survey studies used to measure events, behavior and attitudes in a given population or samples and to gather information on the current status of a phenomenon. Soa descriptive study involving surveyis used here as the aim of the proposed study is to get accurate and current information on pain management knowledge of emergency nurses. Furthermore, surveys are easy to undertake as they only involve one contact with the study population(Gerrish& Lacey, 2009).

Study Population and sample- The term population refers to the total population with specific characteristic that forms the focus of the study (Gerrish& Lacey, 2009). The population in this proposed study will be registered nurses working in an emergency department ofa major teaching hospitalin Western Sydney.An inclusion/exclusion criteria is used to delimit this population to a homogenous group and the resultant group is called the target population. According to LoBiondo-Wood & Haber(2010) the target population is the set of population to whom the researcher proposes to make generalisations.

Inclusion criteria
1. Registered nurses who work in the emergency departmentpermanently fulltime or part time who are delivering direct care to patients.
2. Clinical nurse specialist and nurse educators who administrate analgesia as part of their work.

Due to the financial and time constraints the whole target population will not be studied and therefore a subset will be used to obtain data, which is called ‘sample’. According to Polit and Beck (2010) a sample can be defined as a subset of people the researcher select to gather information from a defined population.A nonprobability convenience sampling method is used for this study.According to Barbosi and Jackson (2011) non-probability sampling are less expensive and requires less time and fewerresources.Taylor, Kermode and Roberts (2006) stated that convenience sampling methods are commonly used in clinical nursing research settings especiallywhen there are not adequate people to forma probability sample.The general nursestaffing levels in an emergency department will be around 150 permanent nurses including nurse specialist and educators. So the sample size is limited to 120 nurses who fit in to the inclusion criteria.

According Schneider et al. (2010) to the success of a study depends on the quality of data collection methods selected. Quantitative data are collected to classify and describe attributes, behaviors and activities of populations (Parahoo, 2006). Since the proposed study is descriptive survey, the data collection will be done by using a questionnaire.Advantage of using a questionnaire is that it is a quick, convenient and inexpensive method of collecting standardized information (Gerrish& Lacey, 2009).A self-report questionnaire developed by Ferrell and McCaffery (2008) entitle NKASRP will be usedfor the proposed study.This instrument was originally developed in 1987 and has undergone several revisions and changes. The instrument is designed in accordance with pain management standards of American pain society, World health organization and Agency for Health Care Researchand Quality.This tool has been used in several studies to assess the nurses’ knowledge and attitude regarding pain assessment and management including a study by Al-Shaer et al.,(2011)and found to be an effective tool. The author has taken permission to use this device and the instrument will be adapted for the purpose of this study by omitting few questions which is not relevant to the study. The modified NKASRP questionnaire willconsist of 13 pharmacologic, 3 non pharmacologic and 16 pain assessment questions. In addition, the researcher will use a one page self-report demographic sheet with ten questions to elicit the demographic characteristics of the respondents.The researcher will distribute the questionnaire by hand to the potential participants with an information/covering letter.The researcher intended to spent time in emergency department on several occasions to explain about the study and answer any questions put forward by the participants. Asurveyreturn box will be placed in the nursing staff room and display posters in notice board and provide leaflets explaining the anonymity and confidentiality of the study in an effort to reduce  non-response of participants.

The purpose of data analysis is to make sense of the data received before presenting to an understandable manner (Parahoo, 2006).Adapted NKASRP questionnaire can be marked as correct or incorrectwhich can be converted to a percentage score.The data entry will be done in a controlled manner byvalidating andchecking thedata, cleanthe data and then export to the software which willminimize the errors while inputting the data. The data analyzing will be done by using the statistical package for social sciences (SPSS) version 15 software.The descriptive statistics including frequency, percentage, mean and standard deviation will be used to examine, organize and summaries the demographic data. Inferential statistics will also be used to explore variables that are believed to influence pain knowledge scores. During the data analysis process the data will be stored in the computer with secure passwords and back-up files will be made available.

According to LoBiondo-Wood and Haber (2010) in a quantitativestudy, unless the measurements of the instruments validly and reliably established with regard to a particularstudy, conclusions drawn from the study will be invalid or biased and will notcontribute to the development of evidence based practice.Reliability refers how an instrument such as a questionnaire will produce consistent results in different circumstances provided other parameter remains same (Polit and Beck ,2010). The test- retest reliability of the NKASRP tool was r>0.80 and internal consistency reliability was r>0.70 when a test conducted with 60 nurses(Ferrell & McCaffery 2008). The validity refers to whether a particular instrument actually measures the construct it designed to access (Schneider et al., 2009).Content Validity of the tool was accomplished by review of pain experts. Construct validity has been established by comparing the nurses scores with   various levels of expertise which included students, new graduates, oncology nurses, graduate students, and senior pain experts(Lewthwaiteet al.,2011). The researcher will conduct a pilot study to a small sample of nurses working in the emergency department to identify any problems with the instrument. According to Parahoo (2006),conducting a pilot study willincrease the reliability and validity of the research instruments.

According to Fitzpatrick and Kazer, (2012) the ethics of research is referred to what one morally ought to do in conducting, evaluating,disseminating and applying research to practice  in accordance with ethical principle and moral character. It is the researcher’s responsibility to ensure the protection of the rights of the participant at all times and gain the approval from an appropriate body (LoBiondo-Wood & Haber, 2010). Ethical approval for this study will be sought by the writer from the University of Western SydneyHuman Research Ethics officer. Permission will also be sought at local level from the Director of Nursing and the Nurse Unit Manager of the emergency department.

Respect for persons, confidentiality and beneficence /non-maleficence are three main ethical principles to be considered with regard to the proposed study.

Each stage of the research process has to be organised and coordinated with a practical time frame for the successful integration of the stage (Gerrish&Lacey, 2009). This proposed study is intended to complete in a 12 months period which is outlined below. 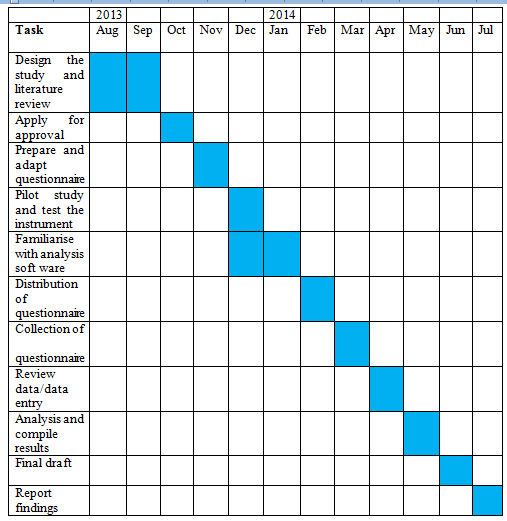